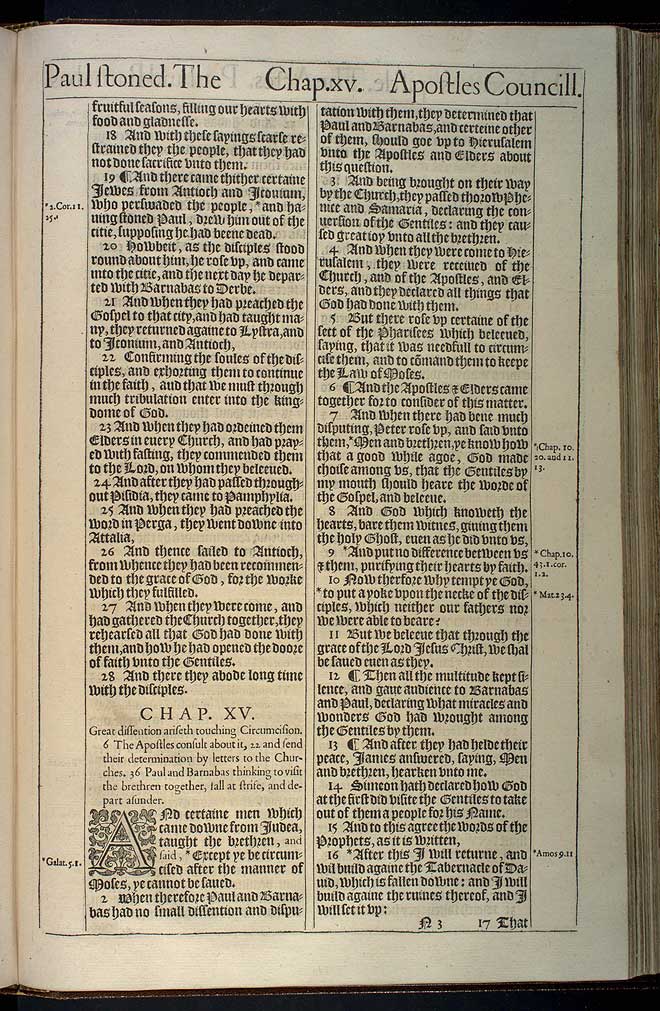 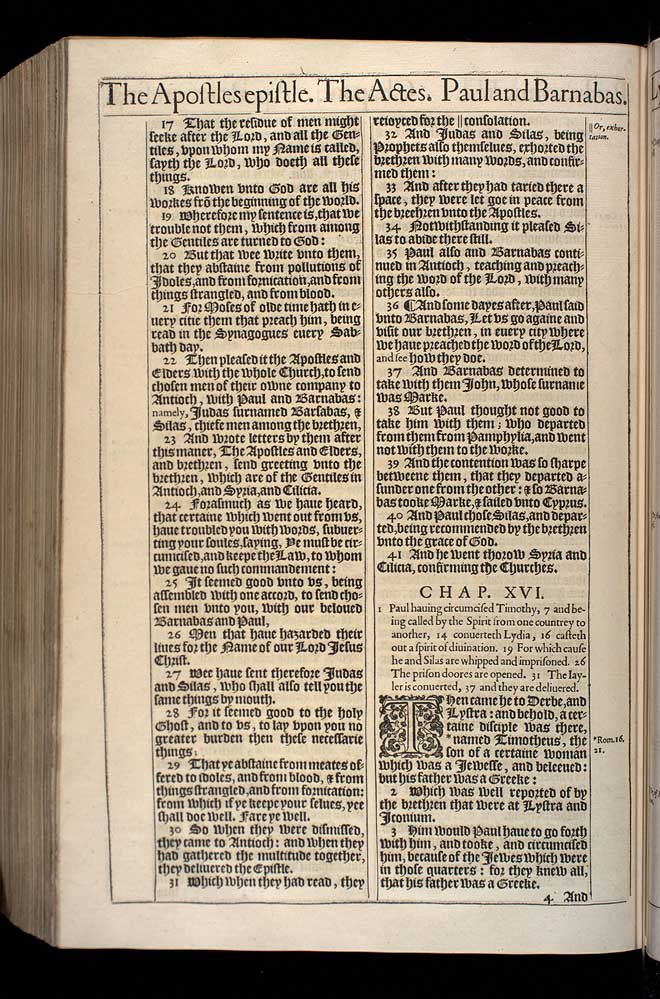 View this The Actes chapter 15 scan at a larger size

Great dissention ariseth touching Circumcision. 6 The Apostles consult about it, 22 and send their determination by letters to the Churches. 36 Paul and Barnabas thinking to visit the brethren together, fall at strife, and depart asunder.

1 And certaine men which came downe from Iudea, taught the brethren, and said, Except ye be circumcised after the manner of Moses, ye cannot be saued.1

2 When therefore Paul and Barnabas had no small dissention and disputation with them, they determined that Paul and Barnabas, and certeine other of them, should goe vp to Hierusalem vnto the Apostles and Elders about this question.

3 And being brought on their way by the Church, they passed thorow Phenice and Samaria, declaring the conuersion of the Gentiles: and they caused great ioy vnto all the brethren.

4 And when they were come to Hierusalem, they were receiued of the Church, and of the Apostles, and Elders, and they declared all things that God had done with them.

5 But there rose vp certaine of the sect of the Pharisees which beleeued, saying, that it was needfull to circumcise them, and to cōmand them to keepe the Law of Moses.

6 ¶ And the Apostles & Elders came together for to consider of this matter.

7 And when there had bene much disputing, Peter rose vp, and said vnto them, Men and brethren, ye know how that a good while agoe, God made choise among vs, that the Gentiles by my mouth should heare the worde of the Gospel, and beleeue.7

8 And God which knoweth the hearts, bare them witnes, giuing them the holy Ghost, euen as he did vnto vs,

9 And put no difference between vs & them, purifying their hearts by faith.9

10 Now therfore why tempt ye God, to put a yoke vpon the necke of the disciples, which neither our fathers nor we were able to beare?10

11 But we beleeue that through the grace of the Lord Iesus Christ, we shal be saued euen as they.

12 ¶ Then all the multitude kept silence, and gaue audience to Barnabas and Paul, declaring what miracles and wonders God had wrought among the Gentiles by them.

13 ¶ And after they had helde their peace, Iames answered, saying, Men and brethren, hearken vnto me.

14 Simeon hath declared how God at the first did visite the Gentiles to take out of them a people for his Name.

15 And to this agree the words of the Prophets, as it is written,

17 That the residue of men might seeke after the Lord, and all the Gentiles, vpon whom my Name is called, sayth the Lord, who doeth all these things.

18 Knowen vnto God are all his workes frō the beginning of the world.

19 Wherefore my sentence is, that we trouble not them, which from among the Gentiles are turned to God:

20 But that wee write vnto them, that they abstaine from pollutions of Idoles, and from fornication, and from things strangled, and from blood.

21 For Moses of olde time hath in euery citie them that preach him, being read in the Synagogues euery Sabbath day.

22 Then pleased it the Apostles and Elders with the whole Church, to send chosen men of their owne company to Antioch, with Paul and Barnabas: namely, Iudas surnamed Barsabas, & Silas, chiefe men among the brethren,

23 And wrote letters by them after this maner, The Apostles and Elders, and brethren, send greeting vnto the brethren, which are of the Gentiles in Antioch, and Syria, and Cilicia.

24 Forasmuch as we haue heard, that certaine which went out from vs, haue troubled you with words, subuerting your soules, saying, Ye must be circumcised, and keepe the Law, to whom we gaue no such commandement:

25 It seemed good vnto vs, being assembled with one accord, to send chosen men vnto you, with our beloued Barnabas and Paul,

26 Men that haue hazarded their liues for the Name of our Lord Iesus Christ.

27 Wee haue sent therefore Iudas and Silas, who shall also tell you the same things by mouth.

28 For it seemed good to the holy Ghost, and to vs, to lay vpon you no greater burden then these necessarie things;

29 That ye abstaine from meates offered to idoles, and from blood, & from things strangled, and from fornication: from which if ye keepe your selues, yee shall doe well. Fare ye well.

30 So when they were dismissed, they came to Antioch: and when they had gathered the multitude together, they deliuered the Epistle.

31 Which when they had read, they reioyced for the consolation.31

32 And Iudas and Silas, being Prophets also themselues, exhorted the brethren with many words, and confirmed them:

33 And after they had taried there a space, they were let goe in peace from the breehren vnto the Apostles.

34 Notwithstanding it pleased Silas to abide there still.

35 Paul also and Barnabas continued in Antioch, teaching and preaching the word of the Lord, with many others also.

36 ¶ And some dayes after, Paul said vnto Barnabas, Let vs go againe and visit our brethren, in euery city where we haue preached the word of the Lord, and see how they doe.

37 And Barnabas determined to take with them Iohn, whose surname was Marke.

38 But Paul thought not good to take him with them; who departed from them from Pamphylia, and went not with them to the worke.

39 And the contention was so sharpe betweene them, that they departed asunder one from the other: & so Barnabas tooke Marke, & sailed vnto Cyprus.

40 And Paul chose Silas, and departed, being recommended by the brethren vnto the grace of God.

41 And he went thorow Syria and Cilicia, confirming the Churches.