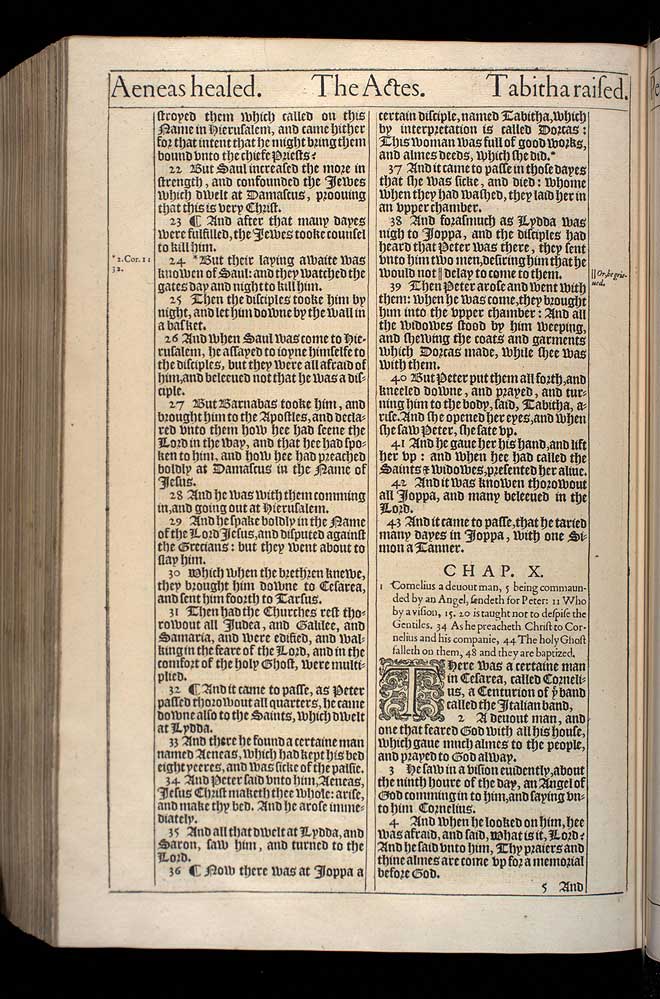 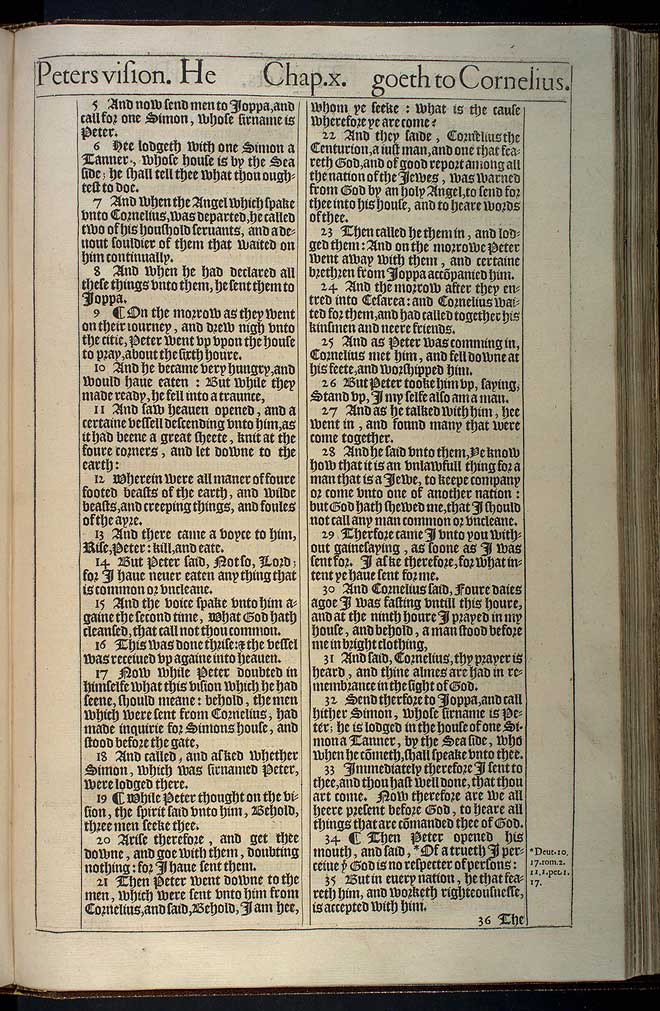 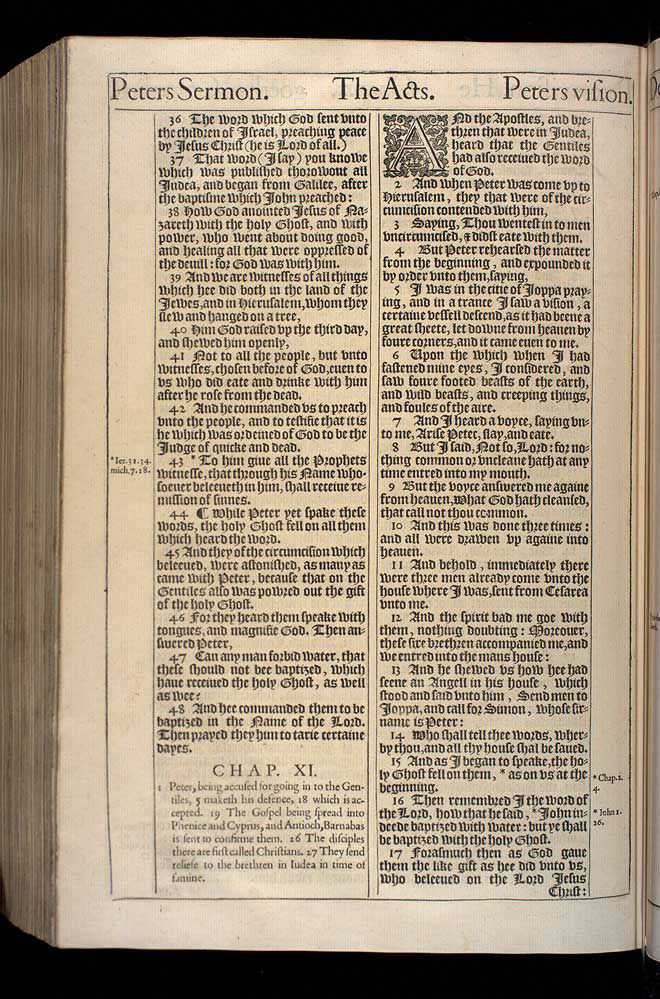 View this The Actes chapter 10 scan at a larger size

1 Cornelius a deuout man, 5 being commaunded by an Angel, sendeth for Peter: 11 Who by a vision, 15. 20 is taught not to despise the Gentiles. 34 As he preacheth Christ to Cornelius and his companie, 44 The holy Ghost falleth on them, 48 and they are baptized.

1 There was a certaine man in Cesarea, called Cornelius, a Centurion of þe band called the Italian band,

2 A deuout man, and one that feared God with all his house, which gaue much almes to the people, and prayed to God alway.

3 He saw in a vision euidently, about the ninth houre of the day, an Angel of God comming in to him, and saying vnto him Cornelius.

4 And when he looked on him, hee was afraid, and said, What is it, Lord? And he said vnto him, Thy praiers and thine almes are come vp for a memorial before God.

5 And now send men to Ioppa, and call for one Simon, whose sirname is Peter.

6 Hee lodgeth with one Simon a Tanner, whose house is by the Sea side; he shall tell thee what thou oughtest to doe.

7 And when the Angel which spake vnto Cornelius, was departed, he called two of his houshold seruants, and a deuout souldier of them that waited on him continually.

8 And when he had declared all these things vnto them, he sent them to Ioppa.

9 ¶ On the morrow as they went on their iourney, and drew nigh vnto the citie, Peter went vp vpon the house to pray, about the sixth houre.

10 And he became very hungry, and would haue eaten: But while they made ready, he fell into a traunce,

11 And saw heauen opened, and a certaine vessell descending vnto him, as it had beene a great sheete, knit at the foure corners, and let downe to the earth:

12 Wherein were all maner of foure footed beasts of the earth, and wilde beasts, and creeping things, and foules of the ayre.

14 But Peter said, Not so, Lord; for I haue neuer eaten any thing that is common or vncleane.

15 And the voice spake vnto him againe the second time, What God hath cleansed, that call not thou common.

16 This was done thrise: & the vessel was receiued vp againe into heauen.

17 Now while Peter doubted in himselfe what this vision which he had seene, should meane: behold, the men which were sent from Cornelius, had made inquirie for Simons house, and stood before the gate,

18 And called, and asked whether Simon, which was sirnamed Peter, were lodged there.

20 Arise therefore, and get thee downe, and goe with them, doubting nothing: for I haue sent them.

21 Then Peter went downe to the men, which were sent vnto him from Cornelius, and said, Behold, I am hee, whom ye seeke: what is the cause wherefore ye are come?

22 And they saide, Cornelius the Centurion, a iust man, and one that feareth God, and of good report among all the nation of the Iewes, was warned from God by an holy Angel, to send for thee into his house, and to heare words of thee.

23 Then called he them in, and lodged them: And on the morrowe Peter went away with them, and certaine brethren from Ioppa accōpanied him.

24 And the morrow after they entred into Cesarea: and Cornelius waited for them, and had called together his kinsmen and neere friends.

25 And as Peter was comming in, Cornelius met him, and fell downe at his feete, and worshipped him.

26 But Peter tooke him vp, saying, Stand vp, I my selfe also am a man.

27 And as he talked with him, hee went in, and found many that were come together.

28 And he said vnto them, Ye know how that it is an vnlawfull thing for a man that is a Iewe, to keepe company or come vnto one of another nation: but God hath shewed me, that I should not call any man common or vncleane.

29 Therfore came I vnto you without gainesaying, as soone as I was sent for. I aske therefore, for what intent ye haue sent for me.

30 And Cornelius said, Foure daies agoe I was fasting vntill this houre, and at the ninth houre I prayed in my house, and behold, a man stood before me in bright clothing,

31 And said, Cornelius, thy prayer is heard, and thine almes are had in remembrance in the sight of God.

32 Send therfore to Ioppa, and call hither Simon, whose sirname is Peter; he is lodged in the house of one Simon a Tanner, by the Sea side, who when he cōmeth, shall speake vnto thee.

33 Immediately therefore I sent to thee, and thou hast well done, that thou art come. Now therefore are we all heere present before God, to heare all things that are cōmanded thee of God.

34 ¶ Then Peter opened his mouth, and said, Of a trueth I perceiue þt God is no respecter of persons:34

35 But in euery nation, he that feareth him, and worketh righteousnesse, is accepted with him.

36 The word which God sent vnto the children of Israel, preaching peace by Iesus Christ (he is Lord of all.)

37 That word (I say) you knowe which was published thorowout all Iudea, and began from Galilee, after the baptisme which Iohn preached:

38 How God anointed Iesus of Nazareth with the holy Ghost, and with power, who went about doing good, and healing all that were oppressed of the deuill: for God was with him.

39 And we are witnesses of all things which hee did both in the land of the Iewes, and in Hierusalem, whom they slew and hanged on a tree,

40 Him God raised vp the third day, and shewed him openly,

41 Not to all the people, but vnto witnesses, chosen before of God, euen to vs who did eate and drinke with him after he rose from the dead.

42 And he commanded vs to preach vnto the people, and to testifie that it is he which was ordeined of God to be the Iudge of quicke and dead.

43 To him giue all the Prophets witnesse, that through his Name whosoeuer beleeueth in him, shall receiue remission of sinnes.43

44 ¶ While Peter yet spake these words, the holy Ghost fell on all them which heard the word.

45 And they of the circumcision which beleeued, were astonished, as many as came with Peter, because that on the Gentiles also was powred out the gift of the holy Ghost.

46 For they heard them speake with tongues, and magnifie God. Then answered Peter,

47 Can any man forbid water, that these should not bee baptized, which haue receiued the holy Ghost, as well as wee?

48 And hee commanded them to be baptized in the Name of the Lord. Then prayed they him to tarie certaine dayes.