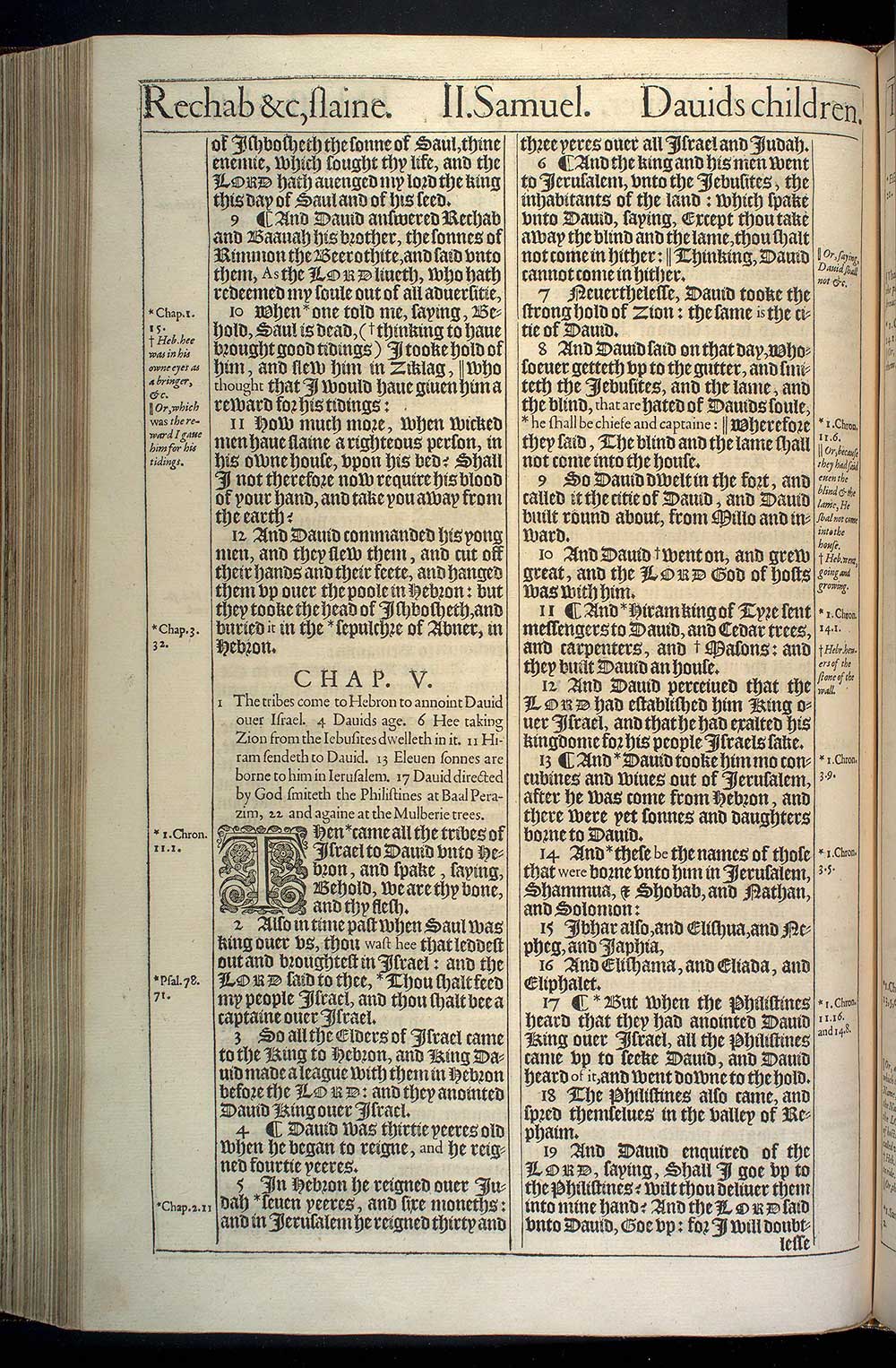 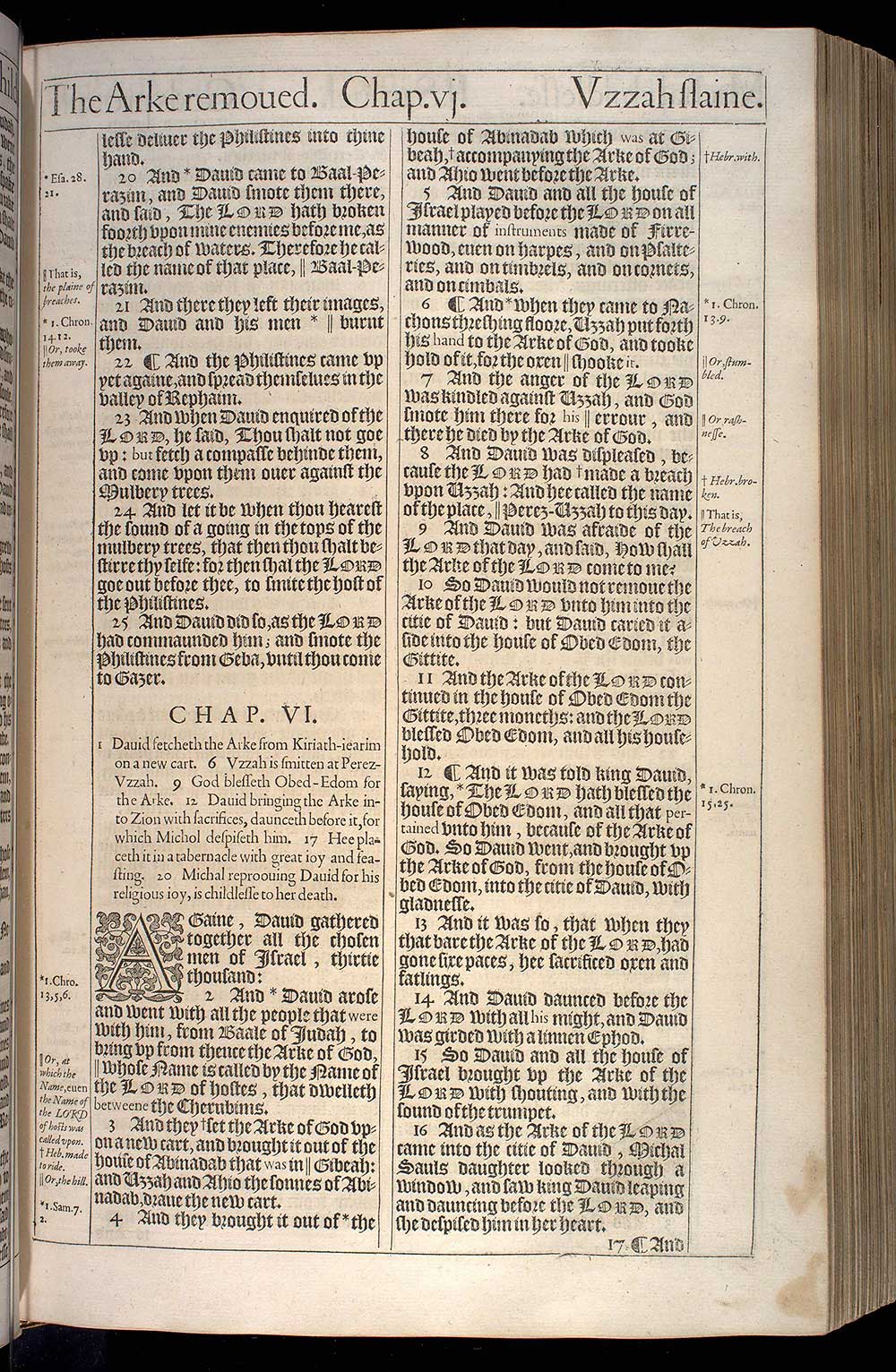 1 The tribes come to Hebron to annoint Dauid ouer Israel. 4 Dauids age. 6 Hee taking Zion from the Iebusites dwelleth in it. 11 Hiram sendeth to Dauid. 13 Eleuen sonnes are borne to him in Ierusalem. 17 Dauid directed by God smiteth the Philistines at Baal Perazim, 22 and againe at the Mulberie trees.

1Then came all the tribes of Israel to Dauid vnto Hebron, and spake, saying, Behold, we are thy bone, and thy flesh.1

2Also in time past when Saul was king ouer vs, thou wast hee that leddest out and broughtest in Israel: and the Lord said to thee, Thou shalt feed my people Israel, and thou shalt bee a captaine ouer Israel.2

3So all the Elders of Israel came to the King to Hebron, and King Dauid made a league with them in Hebron before the Lord: and they anointed Dauid King ouer Israel.

4¶ Dauid was thirtie yeeres old when he began to reigne, and he reigned fourtie yeeres.

5In Hebron he reigned ouer Iudah seuen yeeres, and sixe moneths: and in Ierusalem he reigned thirty and three yeres ouer all Israel and Iudah.5

6¶ And the king and his men went to Ierusalem, vnto the Iebusites, the inhabitants of the land: which spake vnto Dauid, saying, Except thou take away the blind and the lame, thou shalt not come in hither: Thinking, Dauid cannot come in hither.6

7Neuerthelesse, Dauid tooke the strong hold of Zion: the same is the citie of Dauid.

8And Dauid said on that day, Whosoeuer getteth vp to the gutter, and smiteth the Iebusites, and the lame, and the blind, that are hated of Dauids soule, he shall be chiefe and captaine: Wherefore they said, The blind and the lame shall not come into the house.8

9So Dauid dwelt in the fort, and called it the citie of Dauid, and Dauid built round about, from Millo and inward.

10And Dauid went on, and grew great, and the Lord God of hosts was with him.10

11¶ And Hiram king of Tyre sent messengers to Dauid, and Cedar trees, and carpenters, and Masons: and they built Dauid an house.11

12And Dauid perceiued that the Lord had established him King ouer Israel, and that he had exalted his kingdome for his people Israels sake.

13¶ And Dauid tooke him mo concubines and wiues out of Ierusalem, after he was come from Hebron, and there were yet sonnes and daughters borne to Dauid.13

14And these be the names of those that were borne vnto him in Ierusalem, Shammua, & Shobab, and Nathan, and Solomon:14

15Ibhar also, and Elishua, and Nepheg, and Iaphia,

16And Elishama, and Eliada, and Eliphalet.

17¶ But when the Philistines heard that they had anointed Dauid King ouer Israel, all the Philistines came vp to seeke Dauid, and Dauid heard of it, and went downe to the hold.17

18The Philistines also came, and spred themselues in the valley of Rephaim.

19And Dauid enquired of the Lord, saying, Shall I goe vp to the Philistines? wilt thou deliuer them into mine hand? And the Lord said vnto Dauid, Goe vp: for I will doubtlesse deliuer the Philistines into thine hand.

20And Dauid came to Baal-Perazim, and Dauid smote them there, and said, The Lord hath broken foorth vpon mine enemies before me, as the breach of waters. Therefore he called the name of that place, Baal-Perazim.20

21And there they left their images, and Dauid and his men burnt them.21

22¶ And the Philistines came vp yet againe, and spread themselues in the valley of Rephaim.

23And when Dauid enquired of the Lord, he said, Thou shalt not goe vp: but fetch a compasse behinde them, and come vpon them ouer against the Mulbery trees.

24And let it be when thou hearest the sound of a going in the tops of the mulbery trees, that then thou shalt bestirre thy selfe: for then shal the Lord goe out before thee, to smite the host of the Philistines.

25And Dauid did so, as the Lord had commaunded him; and smote the Philistines from Geba, vntil thou come to Gazer.