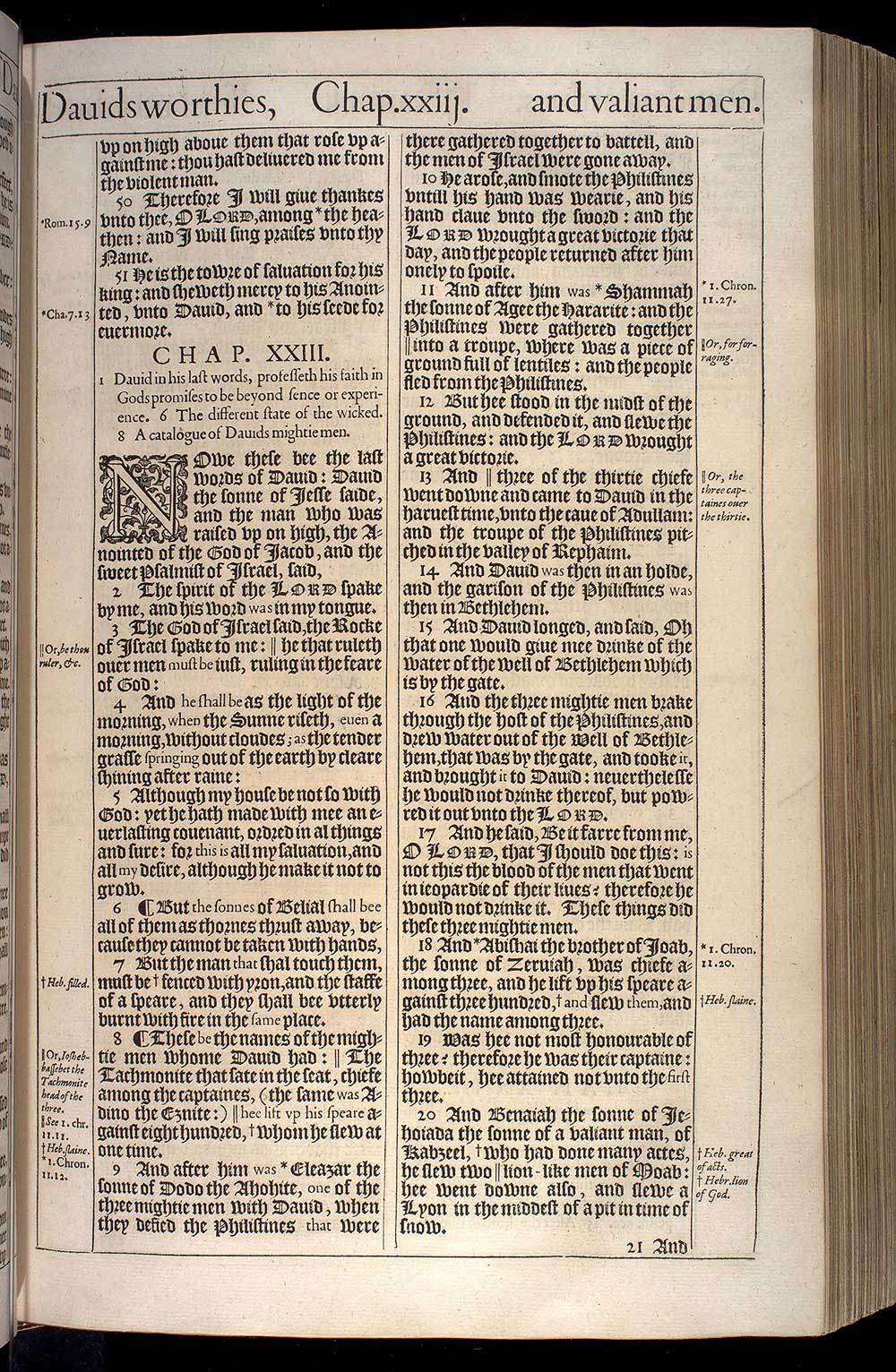 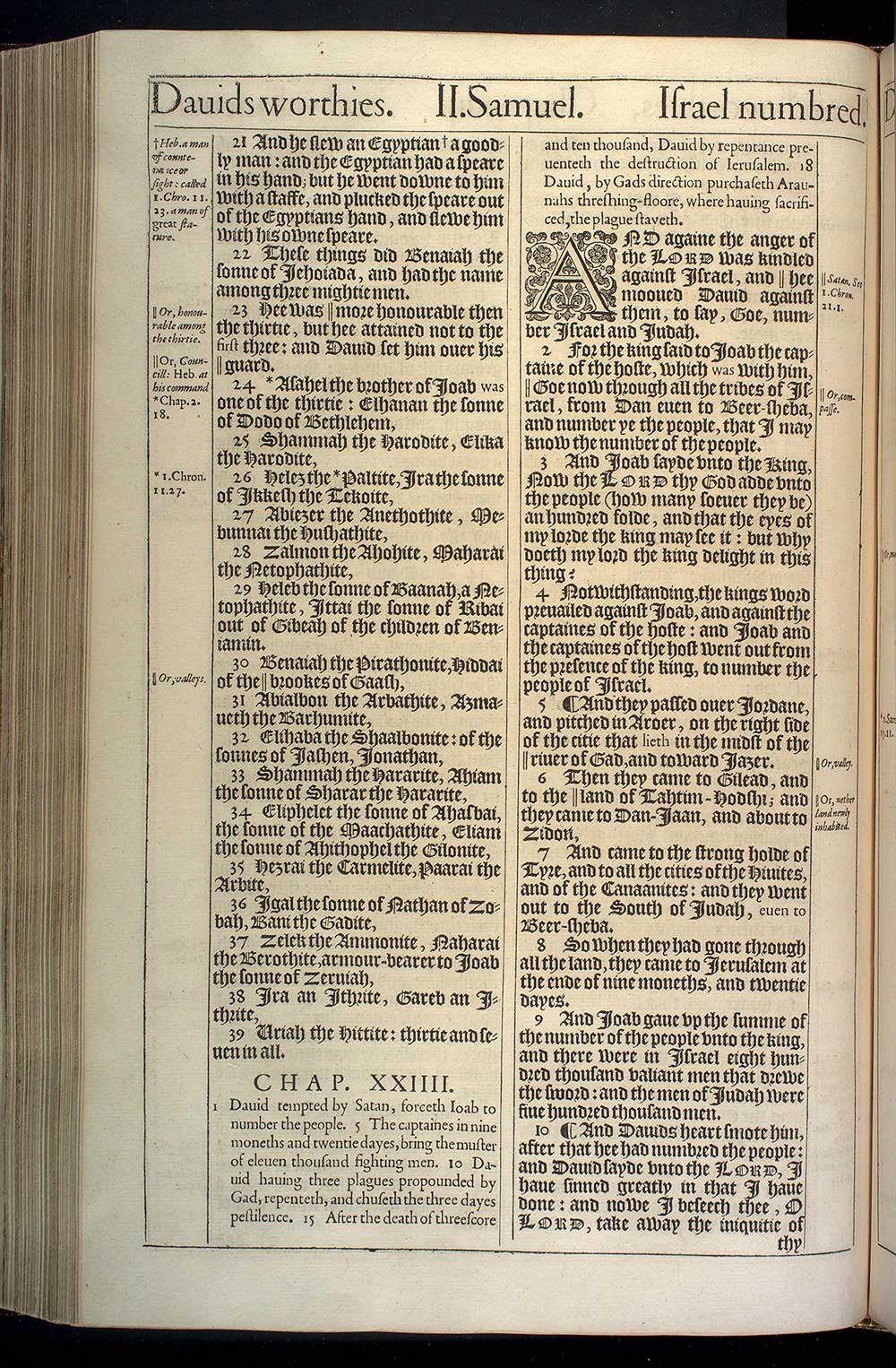 1 Dauid in his last words, professeth his faith in Gods promises to be beyond sence or experience. 6 The different state of the wicked. 8 A catalogue of Dauids mightie men.

1Nowe these bee the last words of Dauid: Dauid the sonne of Iesse saide, and the man who was raised vp on high, the Anointed of the God of Iacob, and the sweet Psalmist of Israel, said,

2The spirit of the Lord spake by me, and his word was in my tongue.

3The God of Israel said, the Rocke of Israel spake to me: he that ruleth ouer men must be iust, ruling in the feare of God:3

4And he shall be as the light of the morning, when the Sunne riseth, euen a morning, without cloudes; as the tender grasse springing out of the earth by cleare shining after raine:

5Although my house be not so with God: yet he hath made with mee an euerlasting couenant, ordred in al things and sure: for this is all my saluation, and all my desire, although he make it not to grow.

6¶ But the sonnes of Belial shall bee all of them as thornes thrust away, because they cannot be taken with hands,

7But the man that shal touch them, must be fenced with yron, and the staffe of a speare, and they shall bee vtterly burnt with fire in the same place.7

8¶ These be the names of the mightie men whome Dauid had: The Tachmonite that sate in the seat, chiefe among the captaines, (the same was Adino the Eznite:) hee lift vp his speare against eight hundred, whom he slew at one time.8

9And after him was Eleazar the sonne of Dodo the Ahohite, one of the three mightie men with Dauid, when they defied the Philistines that were there gathered together to battell, and the men of Israel were gone away.9

10He arose, and smote the Philistines vntill his hand was wearie, and his hand claue vnto the sword: and the Lord wrought a great victorie that day, and the people returned after him onely to spoile.

11And after him was Shammah the sonne of Agee the Hararite: and the Philistines were gathered together into a troupe, where was a piece of ground full of lentiles: and the people fled from the Philistines.11

12But hee stood in the midst of the ground, and defended it, and slewe the Philistines: and the Lord wrought a great victorie.

13And three of the thirtie chiefe went downe and came to Dauid in the haruest time, vnto the caue of Adullam: and the troupe of the Philistines pitched in the valley of Rephaim.13

14And Dauid was then in an holde, and the garison of the Philistines was then in Bethlehem.

15And Dauid longed, and said, Oh that one would giue mee drinke of the water of the well of Bethlehem which is by the gate.

16And the three mightie men brake through the host of the Philistines, and drew water out of the Well of Bethlehem, that was by the gate, and tooke it, and brought it to Dauid: neuerthelesse he would not drinke thereof, but powred it out vnto the Lord.

17And he said, Be it farre from me, O Lord, that I should doe this: is not this the blood of the men that went in ieopardie of their liues? therefore he would not drinke it. These things did these three mightie men.

18And Abishai the brother of Ioab, the sonne of Zeruiah, was chiefe among three, and he lift vp his speare against three hundred, and slew them, and had the name among three.18

19Was hee not most honourable of three? therefore he was their captaine: howbeit, hee attained not vnto the first three.

20And Benaiah the sonne of Iehoiada the sonne of a valiant man, of Kabzeel, who had done many actes, he slew two lion-like men of Moab: hee went downe also, and slewe a Lyon in the middest of a pit in time of snow.20

21And he slew an Egyptian a goodly man: and the Egyptian had a speare in his hand; but he went downe to him with a staffe, and plucked the speare out of the Egyptians hand, and slewe him with his owne speare.21

22These things did Benaiah the sonne of Iehoiada, and had the name among three mightie men.

23Hee was more honourable then the thirtie, but hee attained not to the first three: and Dauid set him ouer his guard.23

24Asahel the brother of Ioab was one of the thirtie: Elhanan the sonne of Dodo of Bethlehem,24

26Helez the Paltite, Ira the sonne of Ikkesh the Tekoite,26

28Zalmon the Ahohite, Maharai the Netophathite,

29Heleb the sonne of Baanah, a Netophathite, Ittai the sonne of Ribai out of Gibeah of the children of Beniamin.

30Benaiah the Pirathonite, Hiddai of the brookes of Gaash,30

35Hezrai the Carmelite, Paarai the Arbite,

36Igal the sonne of Nathan of Zobah, Bani the Gadite,

37Zelek the Ammonite, Naharai the Berothite, armour-bearer to Ioab the sonne of Zeruiah,

39Uriah the Hittite: thirtie and seuen in all.