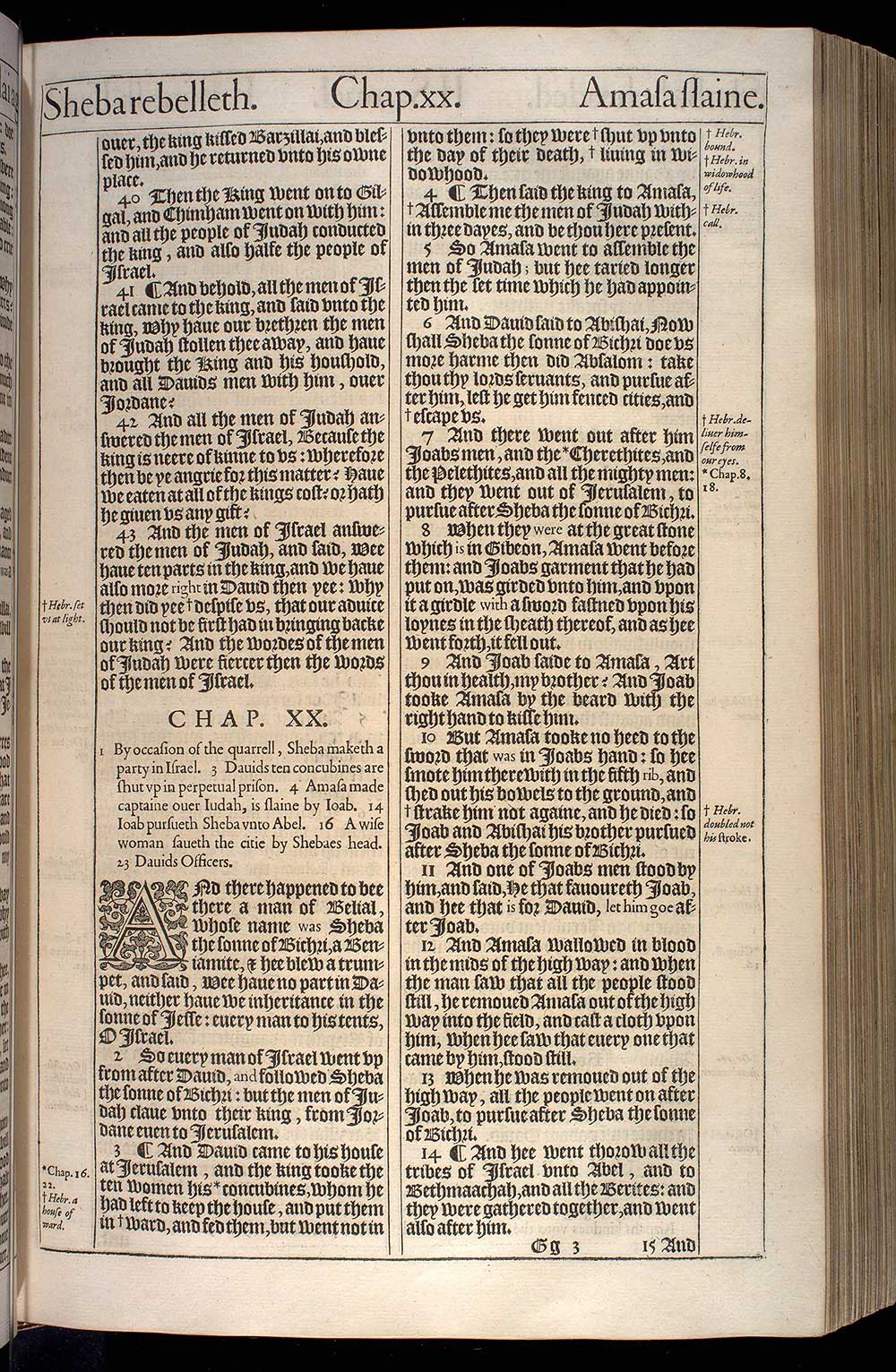 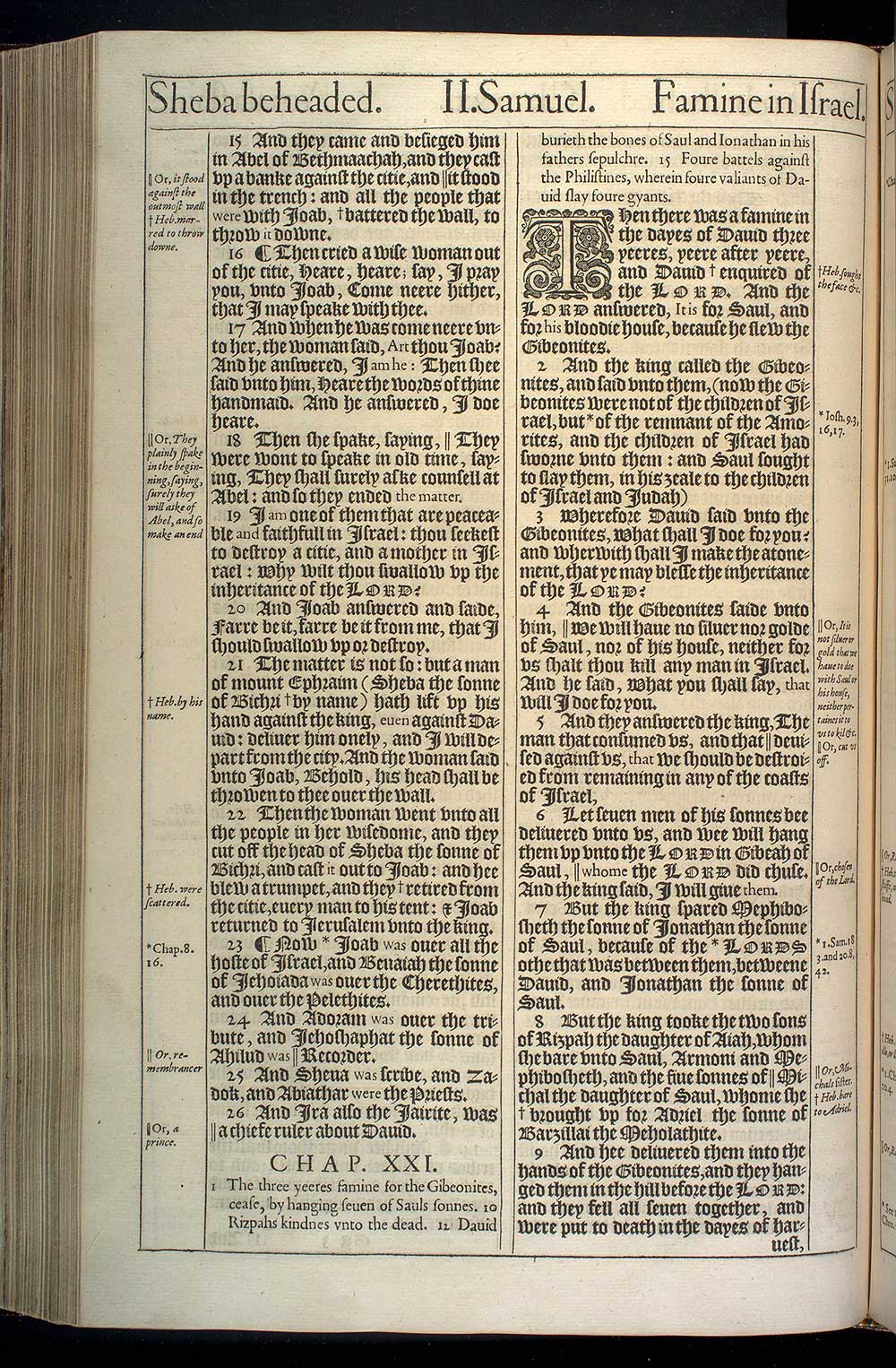 1And there happened to bee there a man of Belial, whose name was Sheba the sonne of Bichri, a Beniamite, & hee blew a trumpet, and said, Wee haue no part in Dauid, neither haue we inheritance in the sonne of Iesse: euery man to his tents, O Israel.

2So euery man of Israel went vp from after Dauid, and followed Sheba the sonne of Bichri: but the men of Iudah claue vnto their king, from Iordane euen to Ierusalem.

3¶ And Dauid came to his house at Ierusalem, and the king tooke the ten women his concubines, whom he had left to keep the house, and put them in ward, and fed them, but went not in vnto them: so they were shut vp vnto the day of their death, liuing in widowhood.3

4¶ Then said the king to Amasa, Assemble me the men of Iudah within three dayes, and be thou here present.4

5So Amasa went to assemble the men of Iudah; but hee taried longer then the set time which he had appointed him.

6And Dauid said to Abishai, Now shall Sheba the sonne of Bichri doe vs more harme then did Absalom: take thou thy lords seruants, and pursue after him, lest he get him fenced cities, and escape vs.6

7And there went out after him Ioabs men, and the Cherethites, and the Pelethites, and all the mighty men: and they went out of Ierusalem, to pursue after Sheba the sonne of Bichri.7

8When they were at the great stone which is in Gibeon, Amasa went before them: and Ioabs garment that he had put on, was girded vnto him, and vpon it a girdle with a sword fastned vpon his loynes in the sheath thereof, and as hee went forth, it fell out.

9And Ioab saide to Amasa, Art thou in health, my brother? And Ioab tooke Amasa by the beard with the right hand to kisse him.

10But Amasa tooke no heed to the sword that was in Ioabs hand: so hee smote him therewith in the fifth rib, and shed out his bowels to the ground, and strake him not againe, and he died: so Ioab and Abishai his brother pursued after Sheba the sonne of Bichri.10

11And one of Ioabs men stood by him, and said, He that fauoureth Ioab, and hee that is for Dauid, let him goe after Ioab.

12And Amasa wallowed in blood in the mids of the high way: and when the man saw that all the people stood still, he remoued Amasa out of the high way into the field, and cast a cloth vpon him, when hee saw that euery one that came by him, stood still.

13When he was remoued out of the high way, all the people went on after Ioab, to pursue after Sheba the sonne of Bichri.

14¶ And hee went thorow all the tribes of Israel vnto Abel, and to Bethmaachah, and all the Berites: and they were gathered together, and went also after him.

15And they came and besieged him in Abel of Bethmaachah, and they cast vp a banke against the citie, and it stood in the trench: and all the people that were with Ioab, battered the wall, to throw it downe.15

16¶ Then cried a wise woman out of the citie, Heare, heare; say, I pray you, vnto Ioab, Come neere hither, that I may speake with thee.

19I am one of them that are peaceable and faithfull in Israel: thou seekest to destroy a citie, and a mother in Israel: Why wilt thou swallow vp the inheritance of the Lord ?

20And Ioab answered and saide, Farre be it, farre be it from me, that I should swallow vp or destroy.

21The matter is not so: but a man of mount Ephraim (Sheba the sonne of Bichri by name) hath lift vp his hand against the king, euen against Dauid: deliuer him onely, and I will depart from the city. And the woman said vnto Ioab, Behold, his head shall be throwen to thee ouer the wall.21

22Then the woman went vnto all the people in her wisedome, and they cut off the head of Sheba the sonne of Bichri, and cast it out to Ioab: and hee blew a trumpet, and they retired from the citie, euery man to his tent: & Ioab returned to Ierusalem vnto the king.22

23¶ Now Ioab was ouer all the hoste of Israel, and Benaiah the sonne of Iehoiada was ouer the Cherethites, and ouer the Pelethites.23

24And Adoram was ouer the tribute, and Iehoshaphat the sonne of Ahilud was Recorder.24

25And Sheua was scribe, and Zadok, and Abiathar were the Priests.

26And Ira also the Iairite, was a chiefe ruler about Dauid.26