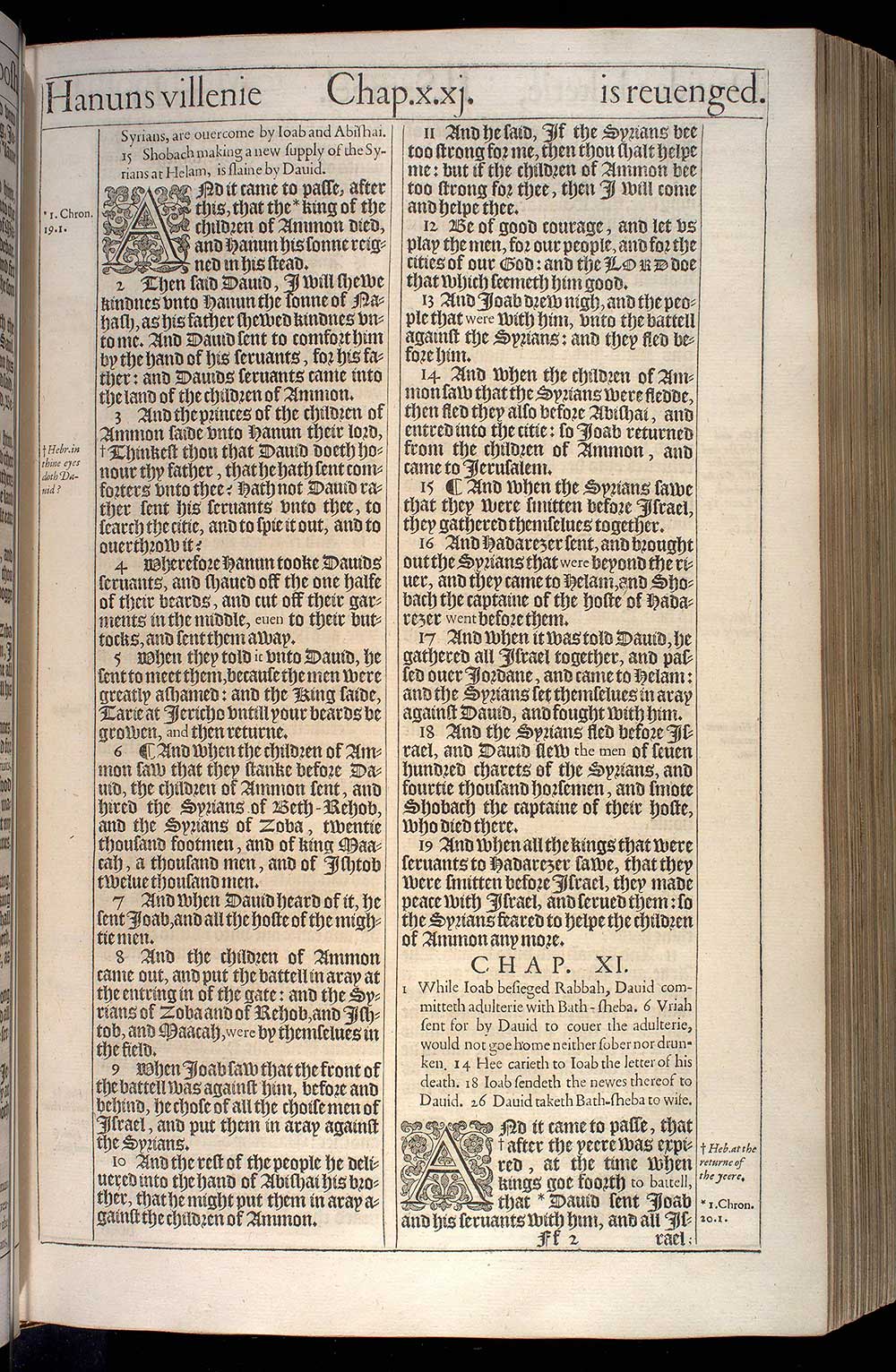 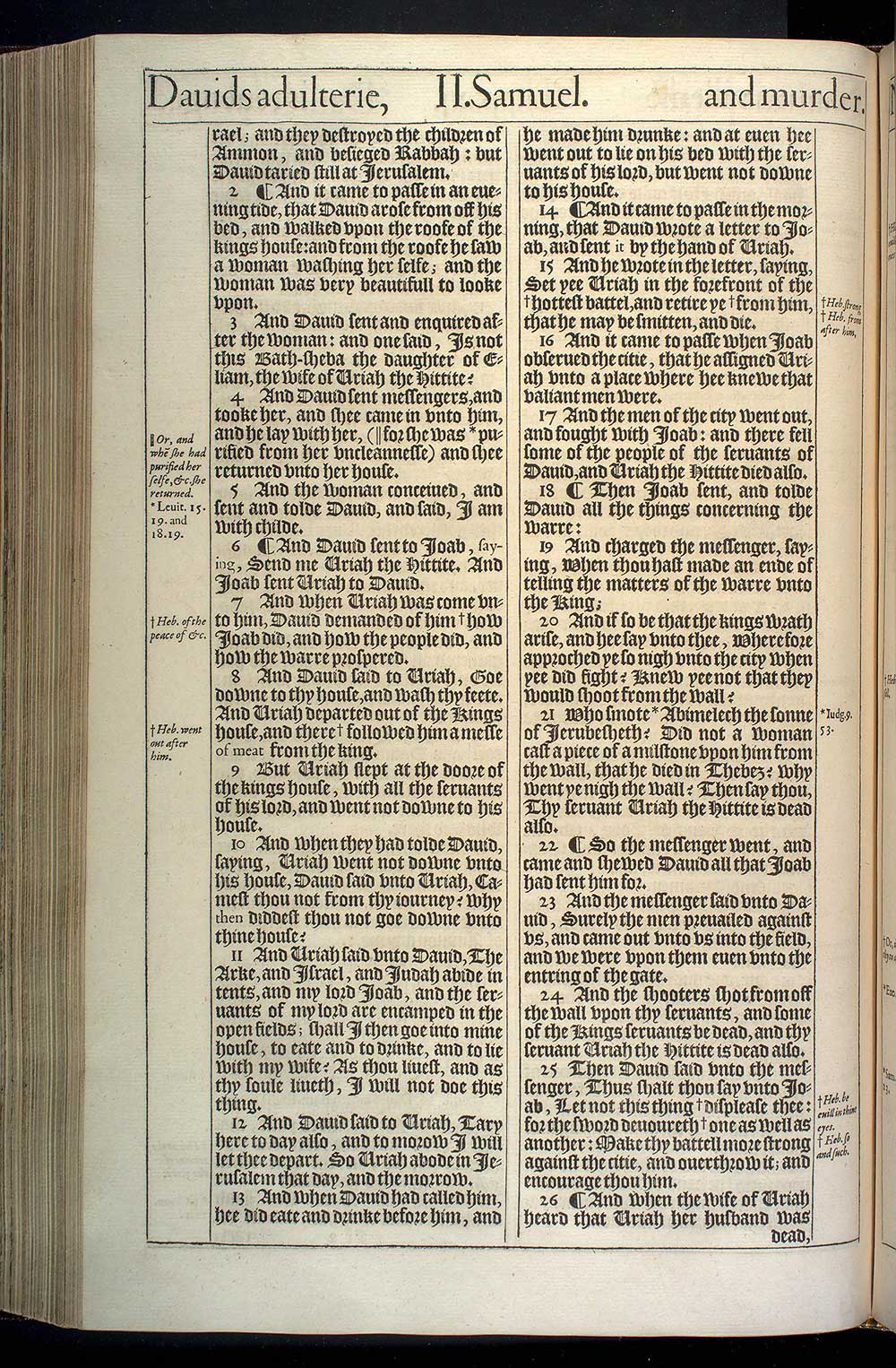 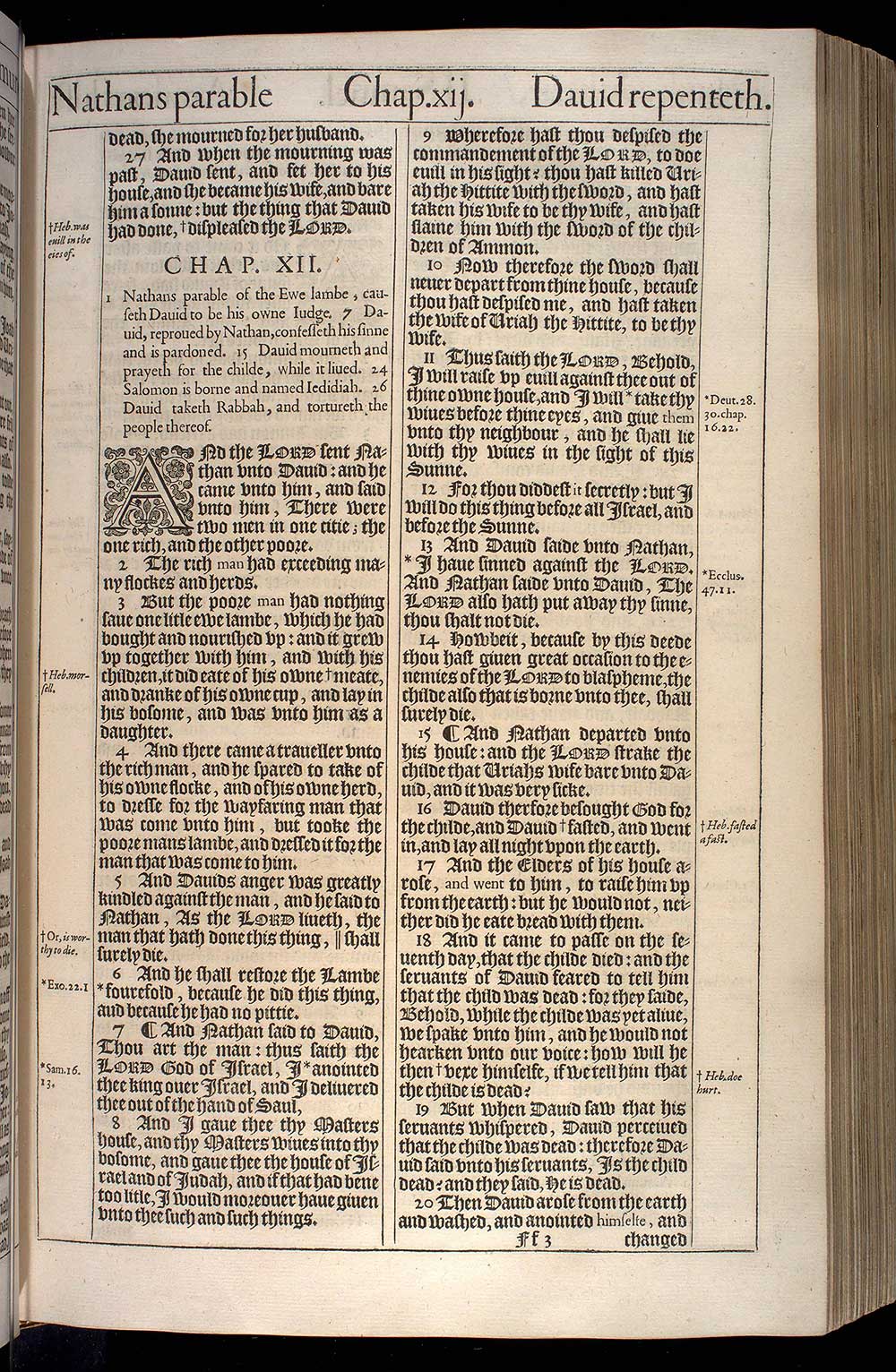 1 While Ioab besieged Rabbah, Dauid committeth adulterie with Bath-sheba. 6 Vriah sent for by Dauid to couer the adulterie, would not goe home neither sober nor drunken. 14 Hee carieth to Ioab the letter of his death. 18 Ioab sendeth the newes thereof to Dauid. 26 Dauid taketh Bath-sheba to wife.

1And it came to passe, that after the yeere was expired, at the time when kings goe foorth to battell, that Dauid sent Ioab and his seruants with him, and all Israel; and they destroyed the children of Ammon, and besieged Rabbah: but Dauid taried still at Ierusalem.1

2¶ And it came to passe in an euening tide, that Dauid arose from off his bed, and walked vpon the roofe of the kings house: and from the roofe he saw a woman washing her selfe; and the woman was very beautifull to looke vpon.

3And Dauid sent and enquired after the woman: and one said, Is not this Bath-sheba the daughter of Eliam, the wife of Uriah the Hittite?

4And Dauid sent messengers, and tooke her, and shee came in vnto him, and he lay with her, ( for she was purified from her vncleannesse) and shee returned vnto her house.4

5And the woman conceiued, and sent and tolde Dauid, and said, I am with childe.

6¶ And Dauid sent to Ioab, saying, Send me Uriah the Hittite. And Ioab sent Uriah to Dauid.

8And Dauid said to Uriah, Goe downe to thy house, and wash thy feete. And Uriah departed out of the Kings house, and there followed him a messe of meat from the king.8

9But Uriah slept at the doore of the kings house, with all the seruants of his lord, and went not downe to his house.

10And when they had tolde Dauid, saying, Uriah went not downe vnto his house, Dauid said vnto Uriah, Camest thou not from thy iourney? why then diddest thou not goe downe vnto thine house?

11And Uriah said vnto Dauid, The Arke, and Israel, and Iudah abide in tents, and my lord Ioab, and the seruants of my lord are encamped in the open fields; shall I then goe into mine house, to eate and to drinke, and to lie with my wife? As thou liuest, and as thy soule liueth, I will not doe this thing.

12And Dauid said to Uriah, Tary here to day also, and to morow I will let thee depart. So Uriah abode in Ierusalem that day, and the morrow.

13And when Dauid had called him, hee did eate and drinke before him, and he made him drunke: and at euen hee went out to lie on his bed with the seruants of his lord, but went not downe to his house.

14¶ And it came to passe in the morning, that Dauid wrote a letter to Ioab, and sent it by the hand of Uriah.

15And he wrote in the letter, saying, Set yee Uriah in the forefront of the hottest battel, and retire ye from him, that he may be smitten, and die.15

16And it came to passe when Ioab obserued the citie, that he assigned Uriah vnto a place where hee knewe that valiant men were.

17And the men of the city went out, and fought with Ioab: and there fell some of the people of the seruants of Dauid, and Uriah the Hittite died also.

18¶ Then Ioab sent, and tolde Dauid all the things concerning the warre:

19And charged the messenger, saying, When thou hast made an ende of telling the matters of the warre vnto the King;

20And if so be that the kings wrath arise, and hee say vnto thee, Wherefore approched ye so nigh vnto the city when yee did fight? Knew yee not that they would shoot from the wall?

21Who smote Abimelech the sonne of Ierubesheth? Did not a woman cast a piece of a milstone vpon him from the wall, that he died in Thebez? why went ye nigh the wall? Then say thou, Thy seruant Uriah the Hittite is dead also.21

22¶ So the messenger went, and came and shewed Dauid all that Ioab had sent him for.

23And the messenger said vnto Dauid, Surely the men preuailed against vs, and came out vnto vs into the field, and we were vpon them euen vnto the entring of the gate.

24And the shooters shot from off the wall vpon thy seruants, and some of the Kings seruants be dead, and thy seruant Uriah the Hittite is dead also.

25Then Dauid said vnto the messenger, Thus shalt thou say vnto Ioab, Let not this thing displease thee: for the sword deuoureth one as well as another: Make thy battell more strong against the citie, and ouerthrow it; and encourage thou him.25

26¶ And when the wife of Uriah heard that Uriah her husband was dead, she mourned for her husband.

27And when the mourning was past, Dauid sent, and fet her to his house, and she became his wife, and bare him a sonne: but the thing that Dauid had done, displeased the Lord.27