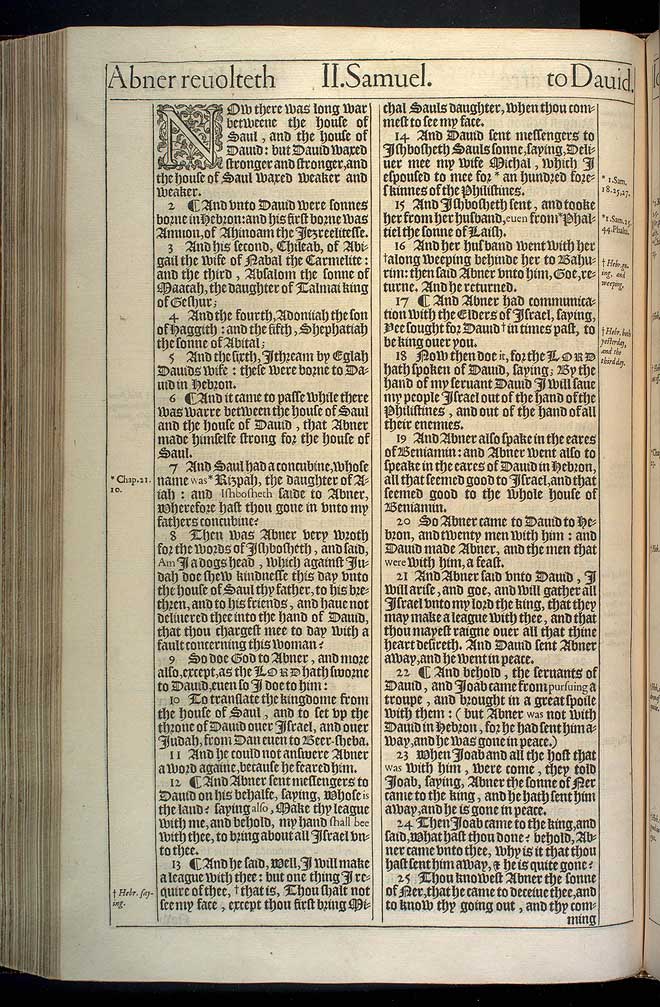 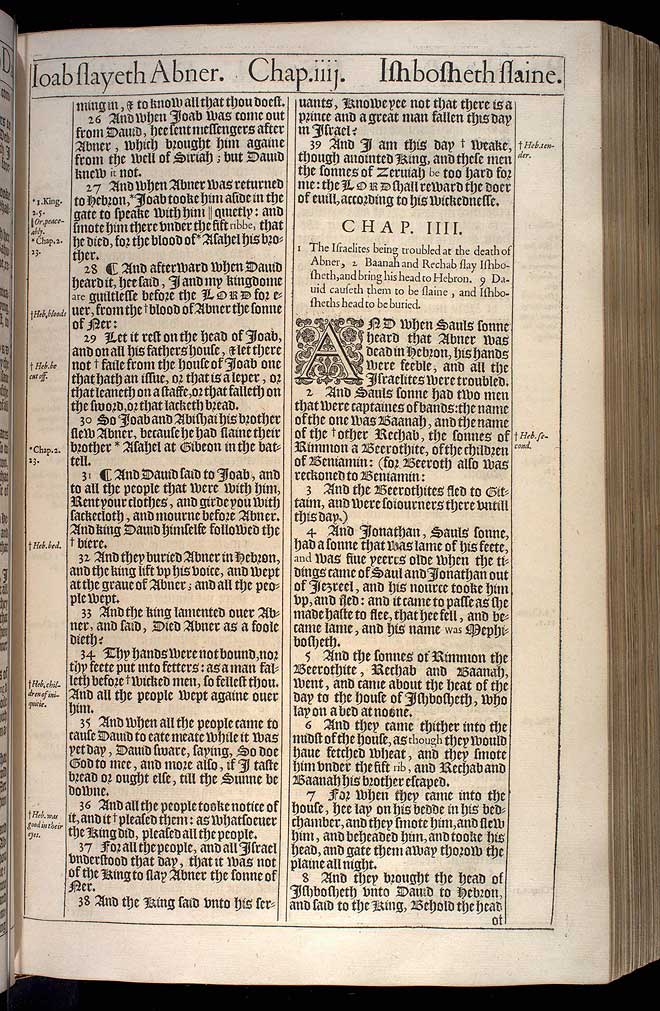 View this 2. Samuel chapter 3 scan at a larger size

1 During the warre Dauid still waxeth stronger. 2 Sixe sonnes were borne to him in Hebron. 6 Abner displeased with Ishbosheth, 12 reuolteth to Dauid. 13 Dauid requireth a condition to bring him his wife Michal. 17 Abner hauing communed with the Israelites, is feasted by Dauid, and dismissed. 22 Ioab returning from battell, is displeased with the king, and killeth Abner. 28 Dauid curseth Ioab, 31 and mourneth for Abner.

2 ¶ And vnto Dauid were sonnes borne in Hebron: and his first borne was Ammon, of Ahinoam the Iezreelitesse.

3 And his second, Chileab, of Abigail the wife of Nabal the Carmelite: and the third, Absalom the sonne of Maacah, the daughter of Talmai king of Geshur;

4 And the fourth, Adoniiah the son of Haggith: and the fifth, Shephatiah the sonne of Abital;

5 And the sixth, Ithream by Eglah Dauids wife: these were borne to Dauid in Hebron.

7 And Saul had a concubine, whose name was Rizpah, the daughter of Aiah: and Ishbosheth saide to Abner, Wherefore hast thou gone in vnto my fathers concubine?7

8 Then was Abner very wroth for the words of Ishbosheth, and said, Am I a dogs head, which against Iudah doe shew kindnesse this day vnto the house of Saul thy father, to his brethren, and to his friends, and haue not deliuered thee into the hand of Dauid, that thou chargest mee to day with a fault concerning this woman?

9 So doe God to Abner, and more also, except, as the Lord hath sworne to Dauid, euen so I doe to him:

10 To translate the kingdome from the house of Saul, and to set vp the throne of Dauid ouer Israel, and ouer Iudah, from Dan euen to Beer-sheba.

11 And he could not answere Abner a word againe, because he feared him.

12 ¶ And Abner sent messengers to Dauid on his behalfe, saying, Whose is the land? saying also, Make thy league with me, and behold, my hand shall bee with thee, to bring about all Israel vnto thee.

13 ¶ And he said, Well, I will make a league with thee: but one thing I require of thee, that is, Thou shalt not see my face, except thou first bring Michal Sauls daughter, when thou commest to see my face.13

14 And Dauid sent messengers to Ishbosheth Sauls sonne, saying, Deliuer mee my wife Michal, which I espoused to mee for an hundred foreskinnes of the Philistines.14

15 And Ishbosheth sent, and tooke her from her husband, euen from Phaltiel the sonne of Laish.15

16 And her husband went with her along weeping behinde her to Bahurim: then said Abner vnto him, Goe, returne. And he returned.16

17 ¶ And Abner had communication with the Elders of Israel, saying, Yee sought for Dauid in times past, to be king ouer you.17

20 So Abner came to Dauid to Hebron, and twenty men with him: and Dauid made Abner, and the men that were with him, a feast.

21 And Abner said vnto Dauid, I will arise, and goe, and will gather all Israel vnto my lord the king, that they may make a league with thee, and that thou mayest raigne ouer all that thine heart desireth. And Dauid sent Abner away, and he went in peace.

22 ¶ And behold, the seruants of Dauid, and Ioab came from pursuing a troupe, and brought in a great spoile with them: (but Abner was not with Dauid in Hebron, for he had sent him away, and he was gone in peace.)

23 When Ioab and all the host that was with him, were come, they told Ioab, saying, Abner the sonne of Ner came to the king, and he hath sent him away, and he is gone in peace.

24 Then Ioab came to the king, and said, What hast thou done? behold, Abner came vnto thee, why is it that thou hast sent him away, & he is quite gone?

25 Thou knowest Abner the sonne of Ner, that he came to deceiue thee, and to know thy going out, and thy comming in, & to know all that thou doest.

26 And when Ioab was come out from Dauid, hee sent messengers after Abner, which brought him againe from the well of Siriah; but Dauid knew it not.

27 And when Abner was returned to Hebron, Ioab tooke him aside in the gate to speake with him quietly: and smote him there vnder the fift ribbe, that he died, for the blood of Asahel his brother.27

28 ¶ And afterward when Dauid heard it, hee said, I and my kingdome are guiltlesse before the Lord for euer, from the blood of Abner the sonne of Ner:28

29 Let it rest on the head of Ioab, and on all his fathers house, & let there not faile from the house of Ioab one that hath an issue, or that is a leper, or that leaneth on a staffe, or that falleth on the sword, or that lacketh bread.29

30 So Ioab and Abishai his brother slew Abner, because he had slaine their brother Asahel at Gibeon in the battell.30

31 ¶ And Dauid said to Ioab, and to all the people that were with him, Rent your clothes, and girde you with sackecloth, and mourne before Abner. And king Dauid himselfe followed the biere.31

32 And they buried Abner in Hebron, and the king lift vp his voice, and wept at the graue of Abner; and all the people wept.

33 And the king lamented ouer Abner, and said, Died Abner as a foole dieth?

34 Thy hands were not bound, nor thy feete put into fetters: as a man falleth before wicked men, so fellest thou. And all the people wept againe ouer him.34

35 And when all the people came to cause Dauid to eate meate while it was yet day, Dauid sware, saying, So doe God to mee, and more also, if I taste bread or ought else, till the Sunne be downe.

37 For all the people, and all Israel vnderstood that day, that it was not of the King to slay Abner the sonne of Ner.

38 And the King said vnto his seruants, Knowe yee not that there is a prince and a great man fallen this day in Israel?

39 And I am this day weake, though anointed King, and these men the sonnes of Zeruiah be too hard for me: the Lord shall reward the doer of euill, according to his wickednesse.39