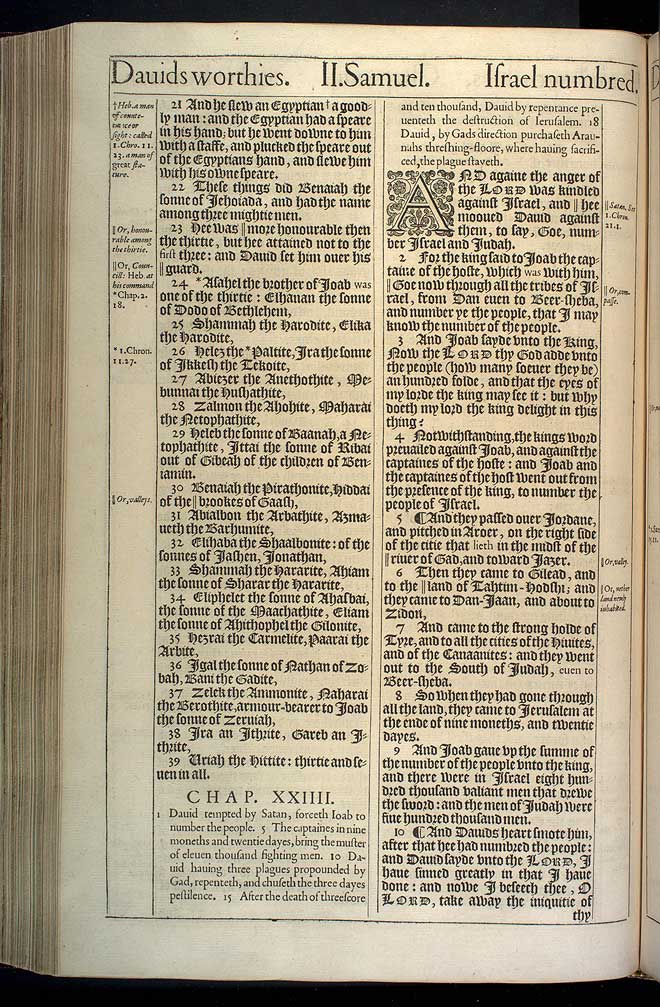 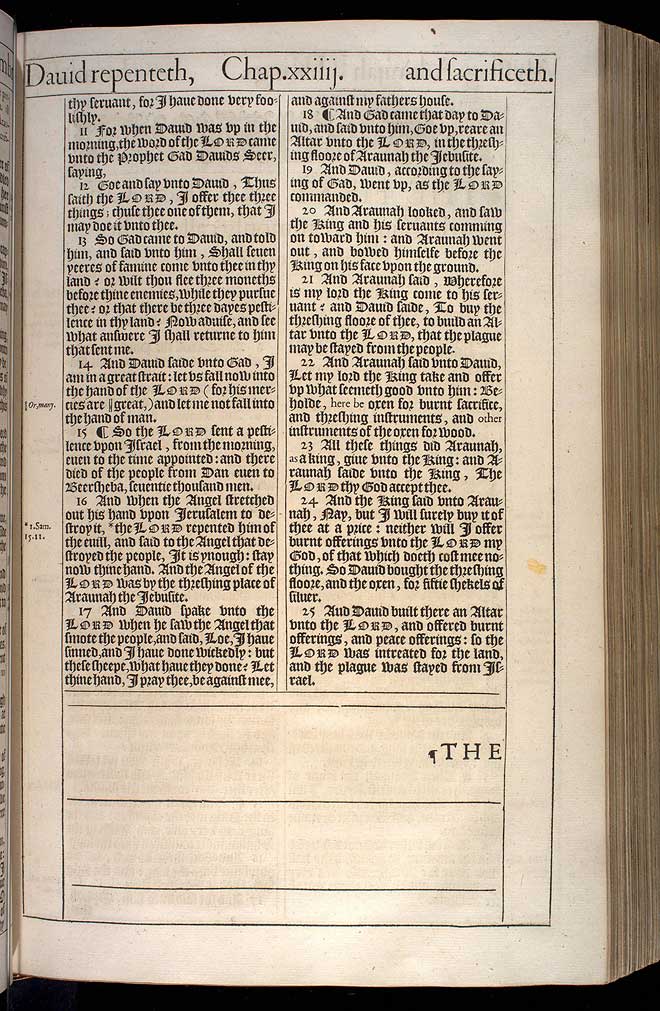 View this 2. Samuel chapter 24 scan at a larger size

1 Dauid tempted by Satan, forceth Ioab to number the people. 5 The captaines in nine moneths and twentie dayes, bring the muster of eleuen thousand fighting men. 10 Dauid hauing three plagues propounded by Gad, repenteth, and chuseth the three dayes pestilence. 15 After the death of threescore and ten thousand, Dauid by repentance preuenteth the destruction of Ierusalem. 18 Dauid, by Gads direction purchaseth Araunahs threshing-floore, where hauing sacrificed, the plague staveth.

1 And againe the anger of the Lord was kindled against Israel, and hee mooued Dauid against them, to say, Goe, number Israel and Iudah.1

2 For the king said to Ioab the captaine of the hoste, which was with him, Goe now through all the tribes of Israel, from Dan euen to Beer-sheba, and number ye the people, that I may know the number of the people.2

3 And Ioab sayde vnto the King, Now the Lord thy God adde vnto the people (how many soeuer they be) an hundred folde, and that the eyes of my lorde the king may see it: but why doeth my lord the king delight in this thing?

5 ¶ And they passed ouer Iordane, and pitched in Aroer, on the right side of the citie that lieth in the midst of the riuer of Gad, and toward Iazer.5

6 Then they came to Gilead, and to the land of Tahtim-Hodshi; and they came to Dan-Iaan, and about to Zidon,6

7 And came to the strong holde of Tyre, and to all the cities of the Hiuites, and of the Canaanites: and they went out to the South of Iudah, euen to Beer-sheba.

8 So when they had gone through all the land, they came to Ierusalem at the ende of nine moneths, and twentie dayes.

9 And Ioab gaue vp the summe of the number of the people vnto the king, and there were in Israel eight hundred thousand valiant men that drewe the sword: and the men of Iudah were fiue hundred thousand men.

10 ¶ And Dauids heart smote him, after that hee had numbred the people: and Dauid sayde vnto the Lord, I haue sinned greatly in that I haue done: and nowe I beseech thee, O Lord, take away the iniquitie of thy seruant, for I haue done very foolishly.

11 For when Dauid was vp in the morning, the word of the Lord came vnto the Prophet Gad Dauids Seer, saying,

12 Goe and say vnto Dauid, Thus saith the Lord, I offer thee three things; chuse thee one of them, that I may doe it vnto thee.

13 So Gad came to Dauid, and told him, and said vnto him, Shall seuen yeeres of famine come vnto thee in thy land? or wilt thou flee three moneths before thine enemies, while they pursue thee? or that there be three dayes pestilence in thy land? Now aduise, and see what answere I shall returne to him that sent me.

15 ¶ So the Lord sent a pestilence vpon Israel, from the morning, euen to the time appointed: and there died of the people from Dan euen to Beersheba, seuentie thousand men.

16 And when the Angel stretched out his hand vpon Ierusalem to destroy it, the Lord repented him of the euill, and said to the Angel that destroyed the people, It is ynough: stay now thine hand. And the Angel of the Lord was by the threshing place of Araunah the Iebusite.16

17 And Dauid spake vnto the Lord when he saw the Angel that smote the people, and said, Loe, I haue sinned, and I haue done wickedly: but these sheepe, what haue they done? Let thine hand, I pray thee, be against mee, and against my fathers house.

18 ¶ And Gad came that day to Dauid, and said vnto him, Goe vp, reare an Altar vnto the Lord, in the threshing floore of Araunah the Iebusite.

19 And Dauid, according to the saying of Gad, went vp, as the Lord commanded.

20 And Araunah looked, and saw the King and his seruants comming on toward him: and Araunah went out, and bowed himselfe before the King on his face vpon the ground.

21 And Araunah said, Wherefore is my lord the King come to his seruant? and Dauid saide, To buy the threshing floore of thee, to build an Altar vnto the Lord, that the plague may be stayed from the people.

22 And Araunah said vnto Dauid, Let my lord the King take and offer vp what seemeth good vnto him: Beholde, here be oxen for burnt sacrifice, and threshing instruments, and other instruments of the oxen for wood.

24 And the King said vnto Araunah, Nay, but I will surely buy it of thee at a price: neither will I offer burnt offerings vnto the Lord my God, of that which doeth cost mee nothing. So Dauid bought the threshing floore, and the oxen, for fiftie shekels of siluer.

25 Aud Dauid built there an Altar vnto the Lord, and offered burnt offerings, and peace offerings: so the Lord was intreated for the land, and the plague was stayed from Israel.