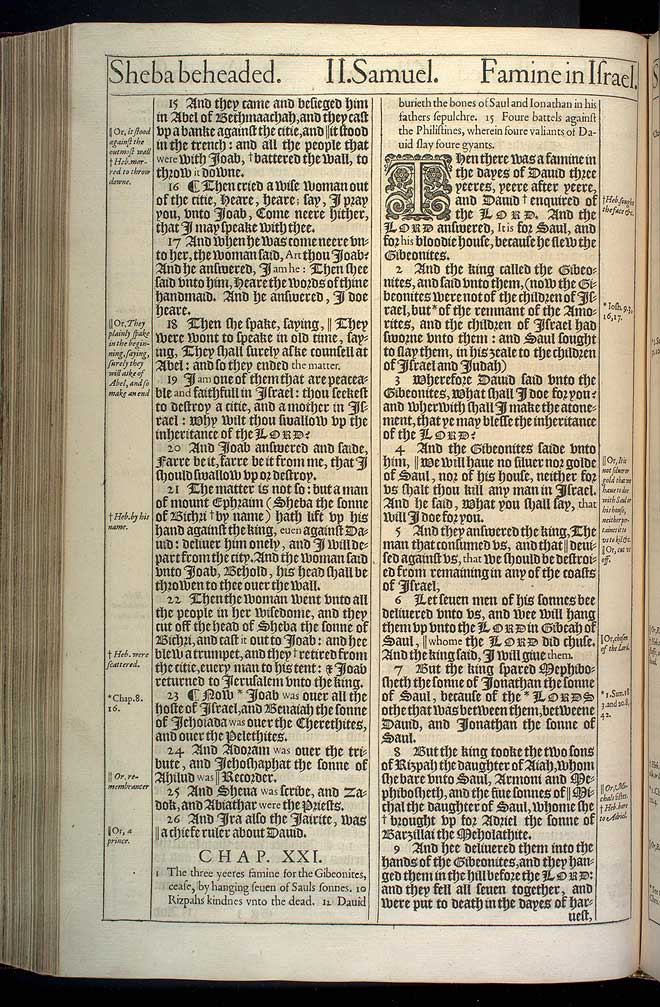 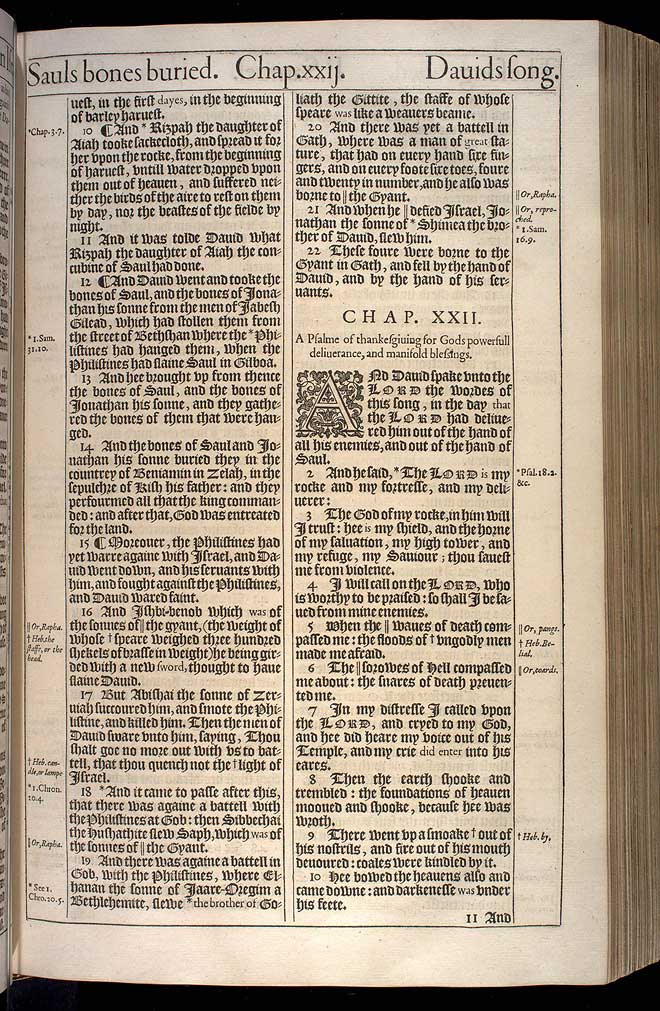 View this 2. Samuel chapter 21 scan at a larger size

1 The three yeeres famine for the Gibeonites, cease, by hanging seuen of Sauls sonnes. 10 Rizpahs kindnes vnto the dead. 12 Dauid burieth the bones of Saul and Ionathan in his fathers sepulchre. 15 Foure battels against the Philistines, wherein foure valiants of Dauid slay foure gyants.

1 Then there was a famine in the dayes of Dauid three yeeres, yeere after yeere, and Dauid enquired of the Lord. And the Lord answered, It is for Saul, and for his bloodie house, because he slew the Gibeonites.1

3 Wherefore Dauid said vnto the Gibeonites, What shall I doe for you? and wherwith shall I make the atonement, that ye may blesse the inheritance of the Lord ?

4 And the Gibeonites saide vnto him, We will haue no siluer nor golde of Saul, nor of his house, neither for vs shalt thou kill any man in Israel. And he said, What you shall say, that will I doe for you.4

5 And they answered the king, The man that consumed vs, and that deuised against vs, that we should be destroied from remaining in any of the coasts of Israel,5

6 Let seuen men of his sonnes bee deliuered vnto vs, and wee will hang them vp vnto the Lord in Gibeah of Saul, whome the Lord did chuse. And the king said, I will giue them.6

8 But the king tooke the two sons of Rizpah the daughter of Aiah, whom she bare vnto Saul, Armoni and Mephibosheth, and the fiue sonnes of Michal the daughter of Saul, whome she brought vp for Adriel the sonne of Barzillai the Meholathite.8

9 And hee deliuered them into the hands of the Gibeonites, and they hanged them in the hill before the Lord: and they fell all seuen together, and were put to death in the dayes of haruest, in the first dayes, in the beginning of barley haruest.

10 ¶ And Rizpah the daughter of Aiah tooke sackecloth, and spread it for her vpon the rocke, from the beginning of haruest, vntill water dropped vpon them out of heauen, and suffered neither the birds of the aire to rest on them by day, nor the beastes of the fielde by night.10

11 And it was tolde Dauid what Rizpah the daughter of Aiah the concubine of Saul had done.

14 And the bones of Saul and Ionathan his sonne buried they in the countrey of Beniamin in Zelah, in the sepulchre of Kish his father: and they perfourmed all that the king commanded: and after that, God was entreated for the land.

16 And Ishbi-benob which was of the sonnes of the gyant, (the weight of whose speare weighed three hundred shekels of brasse in weight) he being girded with a new sword, thought to haue slaine Dauid.16

17 But Abishai the sonne of Zeruiah succoured him, and smote the Philistine, and killed him. Then the men of Dauid sware vnto him, saying, Thou shalt goe no more out with vs to battell, that thou quench not the light of Israel.17

18 And it came to passe after this, that there was againe a battell with the Philistines at Gob: then Sibbechai the Hushathite slew Saph, which was of the sonnes of the Gyant.18

19 And there was againe a battell in Gob, with the Philistines, where Elhanan the sonne of Iaare-Oregim a Bethlehemite, slewe the brother of Goliath the Gittite, the staffe of whose speare was like a weauers beame.19

20 And there was yet a battell in Gath, where was a man of great stature, that had on euery hand sixe fingers, and on euery foote sixe toes, foure and twenty in number, and he also was borne to the Gyant.20

21 And when he defied Israel, Ionathan the sonne of Shimea the brother of Dauid, slew him.21