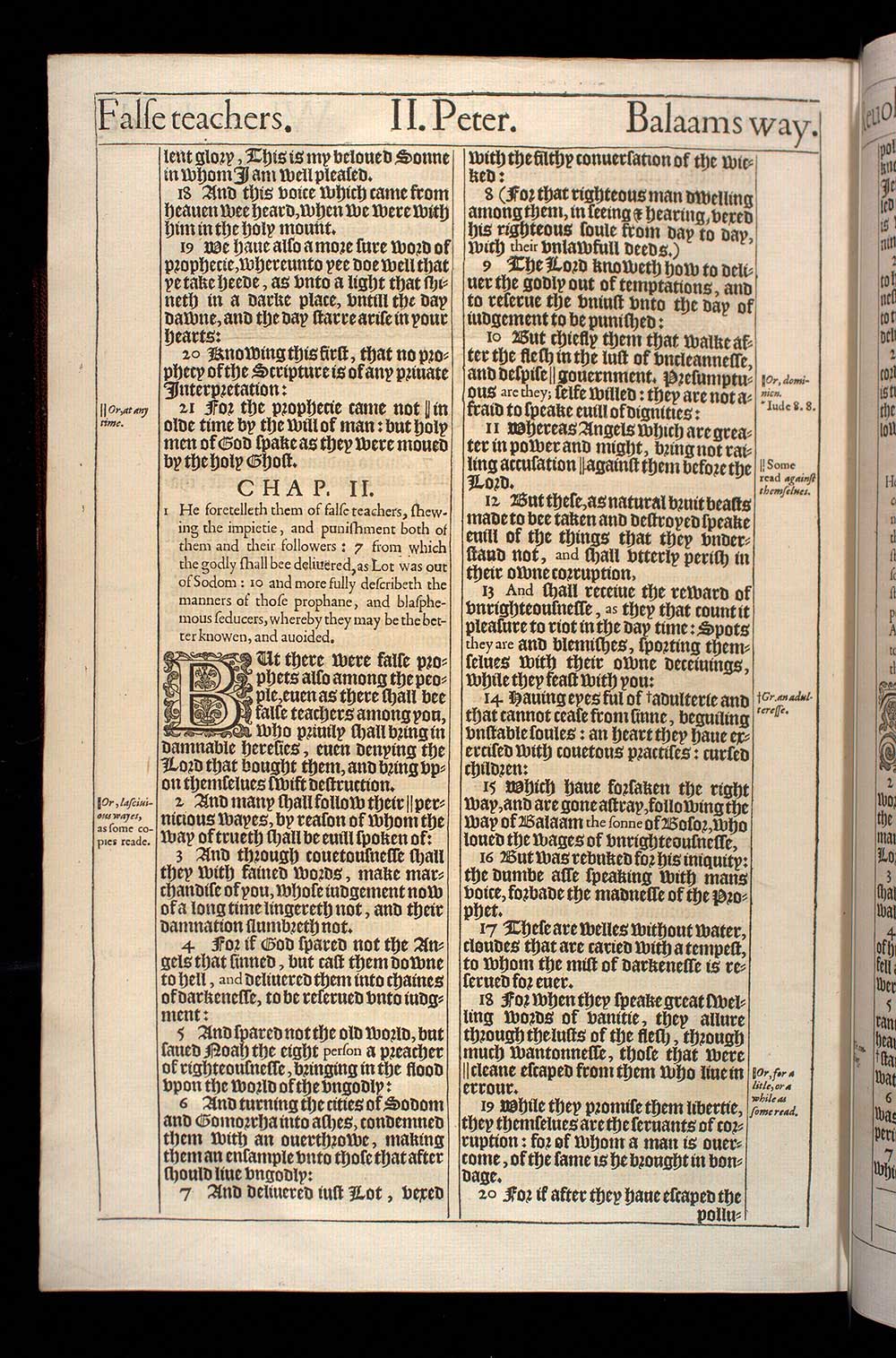 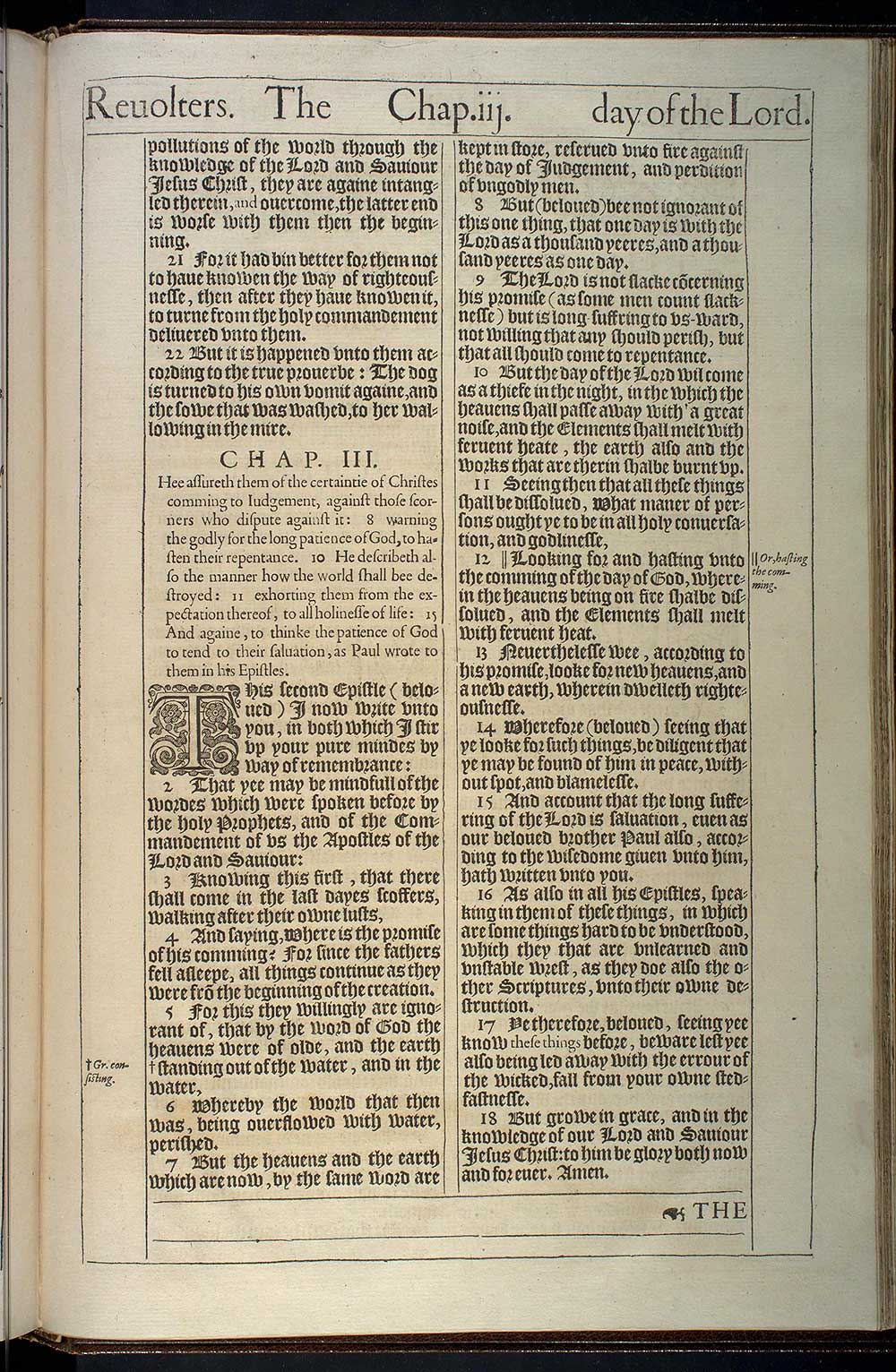 1 He foretelleth them of false teachers, shewing the impietie, and punishment both of them and their followers: 7 from which the godly shall bee deliuered, as Lot was out of Sodom: 10 and more fully describeth the manners of those prophane, and blasphemous seducers, whereby they may be the better knowen, and auoided.

1But there were false prophets also among the people, euen as there shall bee false teachers among you, who priuily shall bring in damnable heresies, euen denying the Lord that bought them, and bring vpon themselues swift destruction.

2And many shall follow their pernicious wayes, by reason of whom the way of trueth shall be euill spoken of:2

3And through couetousnesse shall they with fained words, make marchandise of you, whose iudgement now of a long time lingereth not, and their damnation slumbreth not.

4For if God spared not the Angels that sinned, but cast them downe to hell, and deliuered them into chaines of darkenesse, to be reserued vnto iudgment:

5And spared not the old world, but saued Noah the eight person a preacher of righteousnesse, bringing in the flood vpon the world of the vngodly:

6And turning the cities of Sodom and Gomorrha into ashes, condemned them with an ouerthrowe, making them an ensample vnto those that after should liue vngodly:

7And deliuered iust Lot, vexed with the filthy conuersation of the wicked:

8(For that righteous man dwelling among them, in seeing & hearing, vexed his righteous soule from day to day, with their vnlawfull deeds.)

9The Lord knoweth how to deliuer the godly out of temptations, and to reserue the vniust vnto the day of iudgement to be punished:

10But chiefly them that walke after the flesh in the lust of vncleannesse, and despise gouernment. Presumptuous are they; selfe willed: they are not afraid to speake euill of dignities:10

11Whereas Angels which are greater in power and might, bring not railing accusation against them before the Lord.11

12But these, as natural bruit beasts made to bee taken and destroyed speake euill of the things that they vnderstand not, and shall vtterly perish in their owne corruption,

13And shall receiue the reward of vnrighteousnesse, as they that count it pleasure to riot in the day time: Spots they are and blemishes, sporting themselues with their owne deceiuings, while they feast with you:

15Which haue forsaken the right way, and are gone astray, following the way of Balaam the sonne of Bosor, who loued the wages of vnrighteousnesse,

16But was rebuked for his iniquity: the dumbe asse speaking with mais voice, forbade the madnesse of the Prophet.

17These are welles without water, cloudes that are caried with a tempest, to whom the mist of darkenesse is reserued for euer.

18For when they speake great svelling words of vanitie, they alure through the lusts of the flesh, through much wantonnesse, those that were cleane escaped from them who liue in errour.18

19While they promise them libertie, they themselues are the seruants of corruption: for of whom a man is ouercome, of the same is he brought in bondage.

Reuolters. The day of the Lord.

20For if after they haue escaped the pollutions of the world through the knowledge of the Lord and Sauiour Iesus Christ, they are againe intangled therein, and ouercome, the latter end is worse with them then the beginning.

21For it had bin better for them not to haue knowen the way of righteousnesse, then after they haue knowen it, to turne from the holy commandement deliuered vnto them.

22But it is happened vnto them according to the true prouerbe: The dog is turned to his own vomit againe, and the sowe that was washed, to her wallowing in the mire.