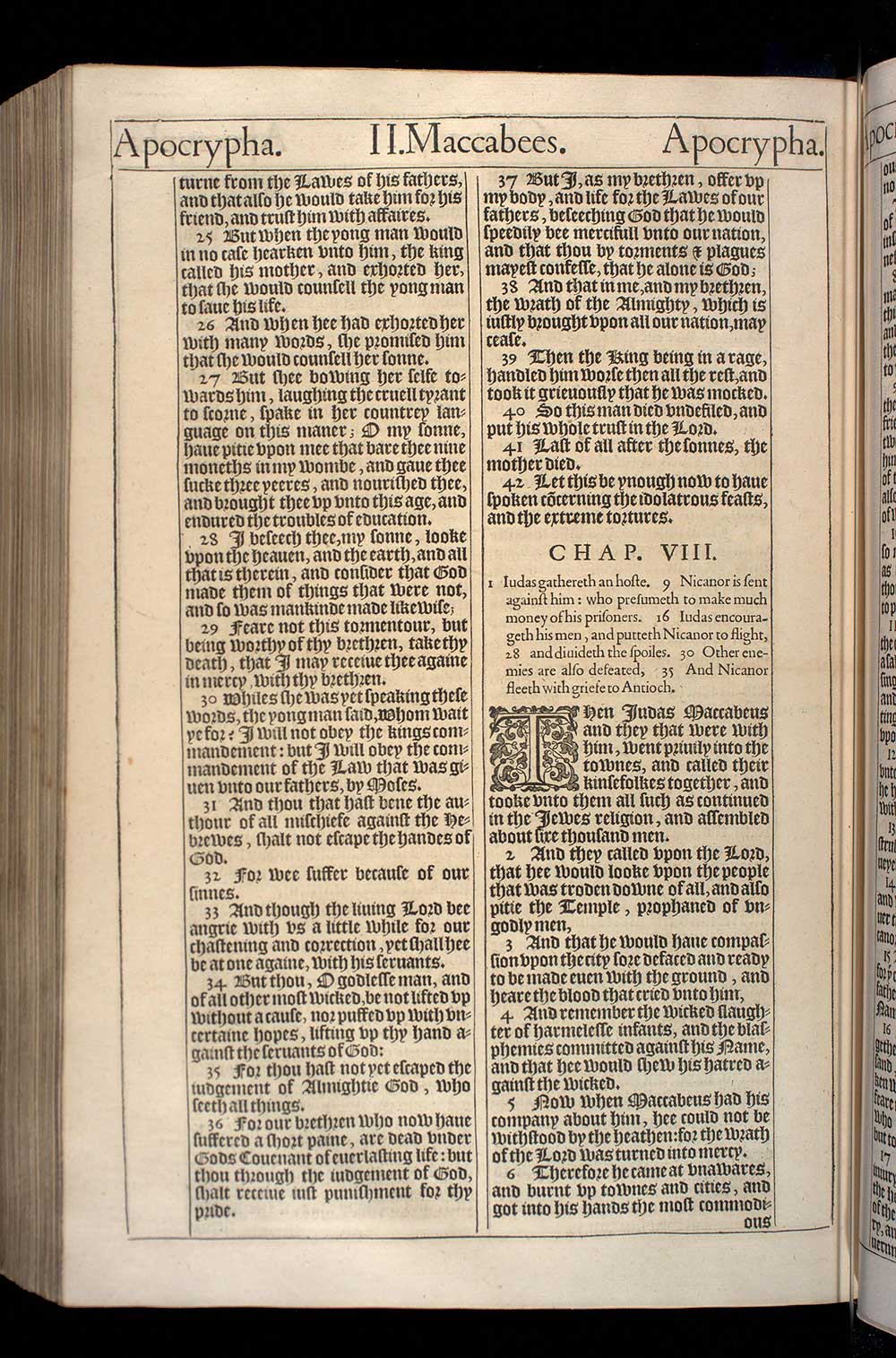 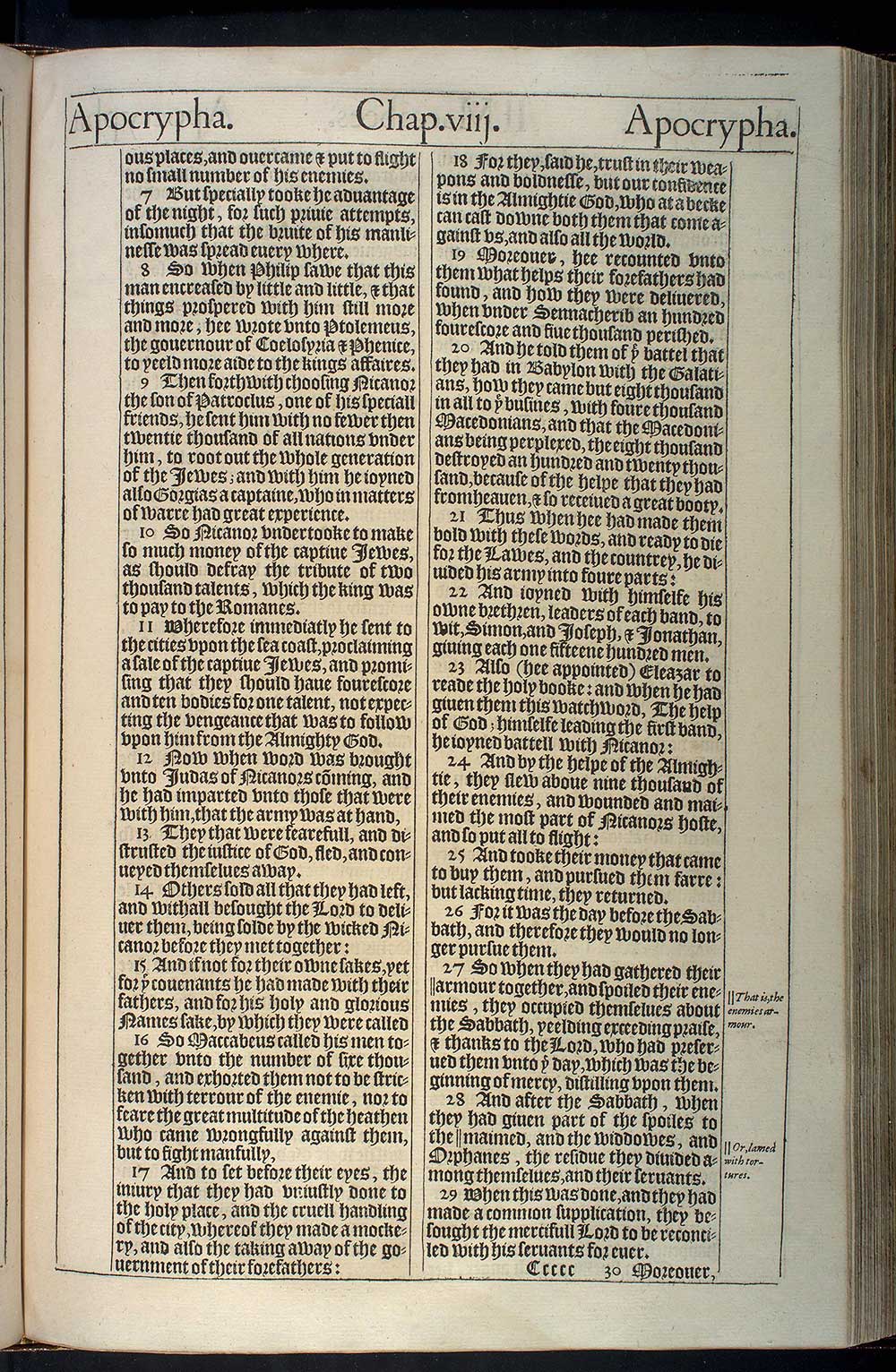 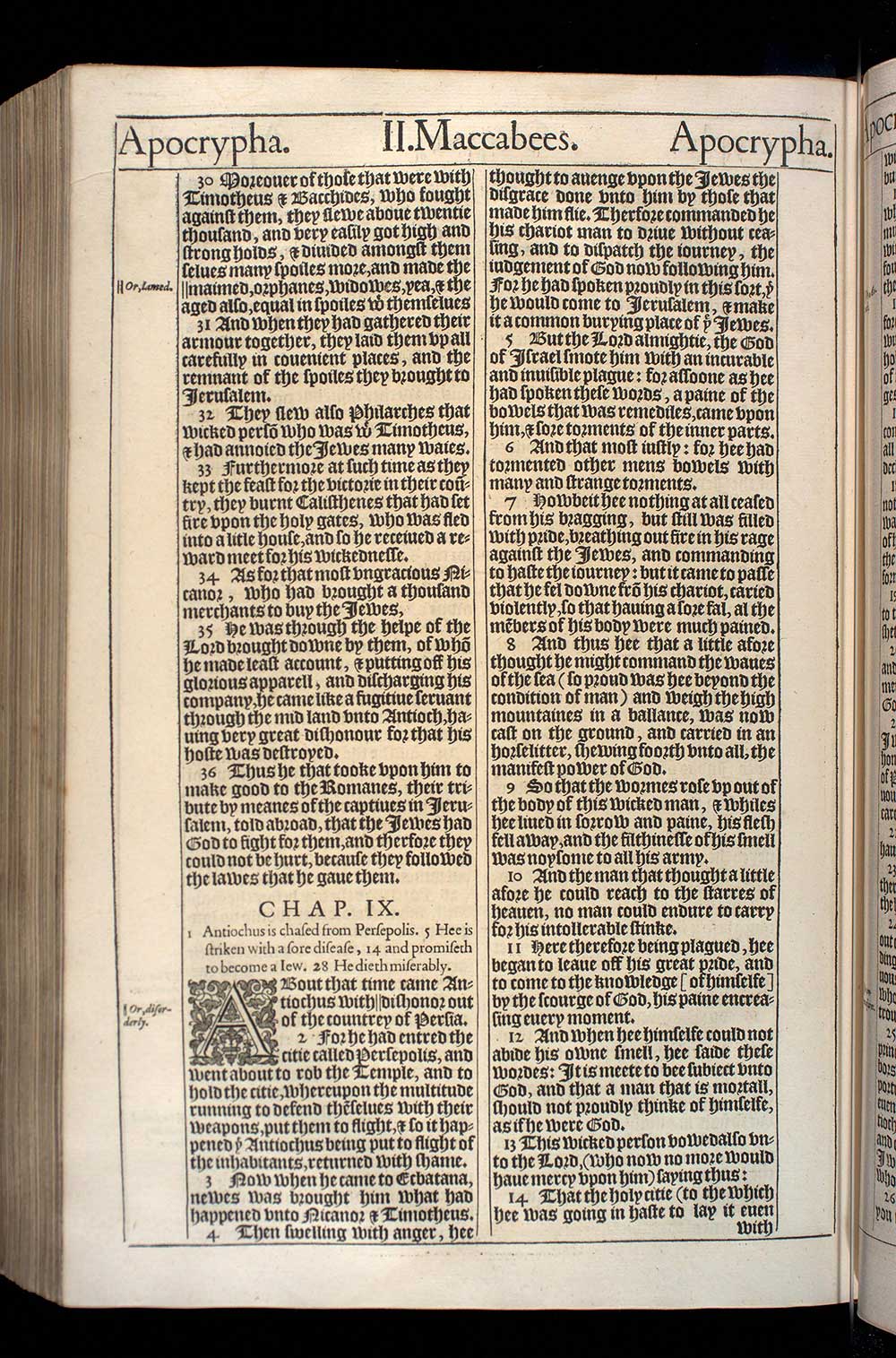 1 Iudas gathereth an hoste. 9 Nicanor is sent against him: who presumeth to make much money of his prisoners. 16 Iudas encourageth his men, and putteth Nicanor to flight, 28 and diuideth the spoiles. 30 Other enemies are also defeated, 35 And Nicanor fleeth with griefe to Antioch.

1Then Iudas Maccabeus and they that were with him, went priuily into the townes, and called their kinsefolkes together, and tooke vnto them all such as continued in the Iewes religion, and assembled about sixe thousand men.

2And they called vpon the Lord, that hee would looke vpon the people that was troden downe of all, and also pitie the Temple, prophaned of vngodly men,

3And that he would haue compassion vpon the city sore defaced and ready to be made euen with the ground, and heare the blood that cried vnto him,

4And remember the wicked slaughter of harmelesse infants, and the blasphemies committed against his Name, and that hee would shew his hatred against the wicked.

5Now when Maccabeus had his company about him, hee could not be withstood by the heathen: for the wrath of the Lord was turned into mercy.

6Therefore he came at vnawares, and burnt vp townes and cities, and got into his hands the most commodious places, and ouercame & put to flight no small number of his enemies.

7But specially tooke he aduantage of the night, for such priuie attempts, insomuch that the bruite of his manlinesse was spread euery where.

8So when Philip sawe that this man encreased by little and little, & that things prospered with him still more and more, hee wrote vnto Ptolemeus, the gouernour of Coelosyria & Phenice, to yeeld more aide to the kings affaires.

9Then forthwith choosing Nicanor the son of Patroclus, one of his speciall friends, he sent him with no fewer then twentie thousand of all nations vnder him, to root out the whole generation of the Iewes; and with him he ioyned also Gorgias a captaine, who in matters of warre had great experience.

10So Nicanor vndertooke to make so much money of the captiue Iewes, as should defray the tribute of two thousand talents, which the king was to pay to the Romanes.

11Wherefore immediatly he sent to the cities vpon the sea coast, proclaiming a sale of the captiue Iewes, and promising that they should haue fourescore and ten bodies for one talent, not expecting the vengeance that was to follow vpon him from the Almighty God.

12Now when word was brought vnto Iudas of Nicanors cōming, and he had imparted vnto those that were with him, that the army was at hand,

13They that were fearefull, and distrusted the iustice of God, fled, and conueyed themselues away.

14Others sold all that they had left, and withall besought the Lord to deliuer them, being solde by the wicked Nicanor before they met together:

15And if not for their owne sakes, yet for þe couenants he had made with their fathers, and for his holy and glorious Names sake, by which they were called

16So Maccabeus called his men together vnto the number of sixe thousand, and exhorted them not to be stricken with terrour of the enemie, nor to feare the great multitude of the heathen who came wrongfully against them, but to fight manfully,

17And to set before their eyes, the iniury that they had vniustly done to the holy place, and the cruell handling of the city, whereof they made a mockery, and also the taking away of the gouernment of their forefathers:

18For they, said he, trust in their weapons and boldnesse, but our confidence is in the Almightie God, who at a becke can cast downe both them that come against vs, and also all the world.

19Moreouer, hee recounted vnto them what helps their forefathers had found, and how they were deliuered, when vnder Sennacherib an hundred fourescore and fiue thousand perished.

20And he told them of þe battel that they had in Babylon with the Galatians, how they came but eight thousand in all to þe busines, with foure thousand Macedonians, and that the Macedonians being perplexed, the eight thousand destroyed an hundred and twenty thousand, because of the helpe that they had from heauen, & so receiued a great booty.

21Thus when hee had made them bold with these words, and ready to die for the Lawes, and the countrey, he diuided his army into foure parts:

22And ioyned with himselfe his owne brethren, leaders of each band, to wit, Simon, and Ioseph, & Ionathan, giuing each one fifteene hundred men.

23Also (hee appointed) Eleazar to reade the holy booke: and when he had giuen them this watchword, The help of God; himselfe leading the first band, he ioyned battell with Nicanor:

24And by the helpe of the Almightie, they slew aboue nine thousand of their enemies, and wounded and maimed the most part of Nicanors hoste, and so put all to flight:

25And tooke their money that came to buy them, and pursued them farre: but lacking time, they returned.

26For it was the day before the Sabbath, and therefore they would no longer pursue them.

27So when they had gathered their armour together, and spoiled their enemies, they occupied themselues about the Sabbath, yeelding exceeding praise, & thanks to the Lord, who had preserued them vnto þe day, which was the beginning of mercy, distilling vpon them.27

28And after the Sabbath, when they had giuen part of the spoiles to the maimed, and the widdowes, and Orphanes, the residue they diuided among themselues, and their seruants.28

29When this was done, and they had made a common supplication, they besought the mercifull Lord to be reconciled with his seruants for euer.

30Moreouer of those that were with Timotheus & Bacchides, who fought against them, they slewe aboue twentie thousand, and very easily got high and strong holds, & diuided amongst them selues many spoiles more, and made the maimed, orphanes, widowes, yea, & the aged also, equal in spoiles [wt] themselues30

31And when they had gathered their armour together, they laid them vp all carefully in couenient places, and the remnant of the spoiles they brought to Ierusalem.

32They slew also Philarches that wicked persō who was [wt] Timotheus, & had annoied the Iewes many waies.

33Furthermore at such time as they kept the feast for the victorie in their coūtry, they burnt Calisthenes that had set fire vpon the holy gates, who was fled into a litle house, and so he receiued a reward meet for his wickednesse.

34As for that most vngracious Nicanor, who had brought a thousand merchants to buy the Iewes,

35He was through the helpe of the Lord brought downe by them, of whō he made least account, & putting off his glorious apparell, and discharging his company, he came like a fugitiue seruant through the mid land vnto Antioch, hauing very great dishonour for that his hoste was destroyed.

36Thus he that tooke vpon him to make good to the Romanes, their tribute by meanes of the captiues in Ierusalem, told abroad, that the Iewes had God to fight for them, and therfore they could not be hurt, because they followed the lawes that he gaue them.