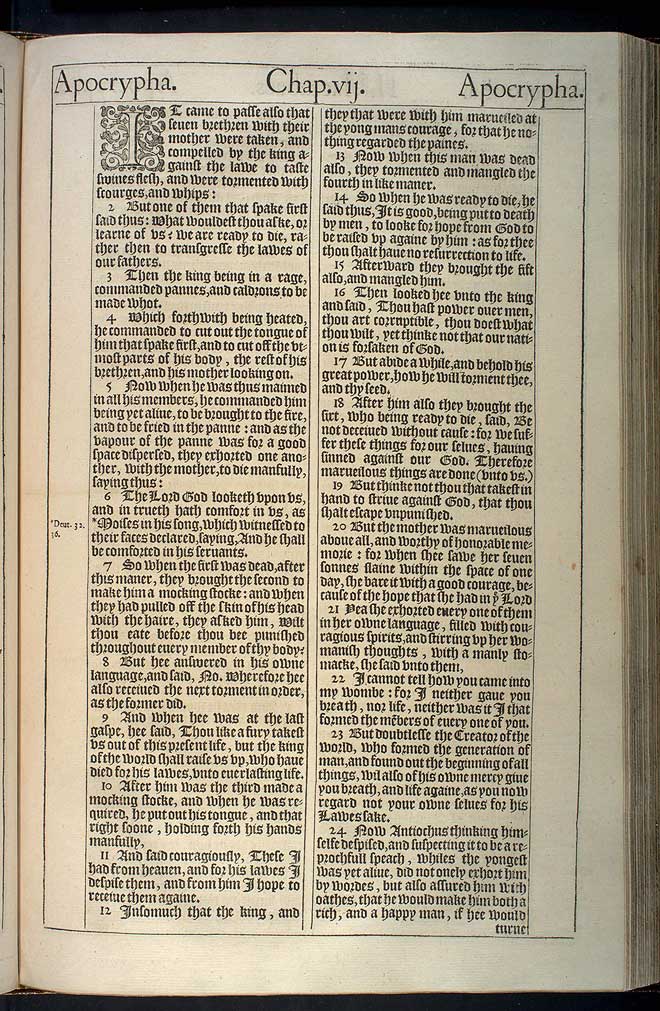 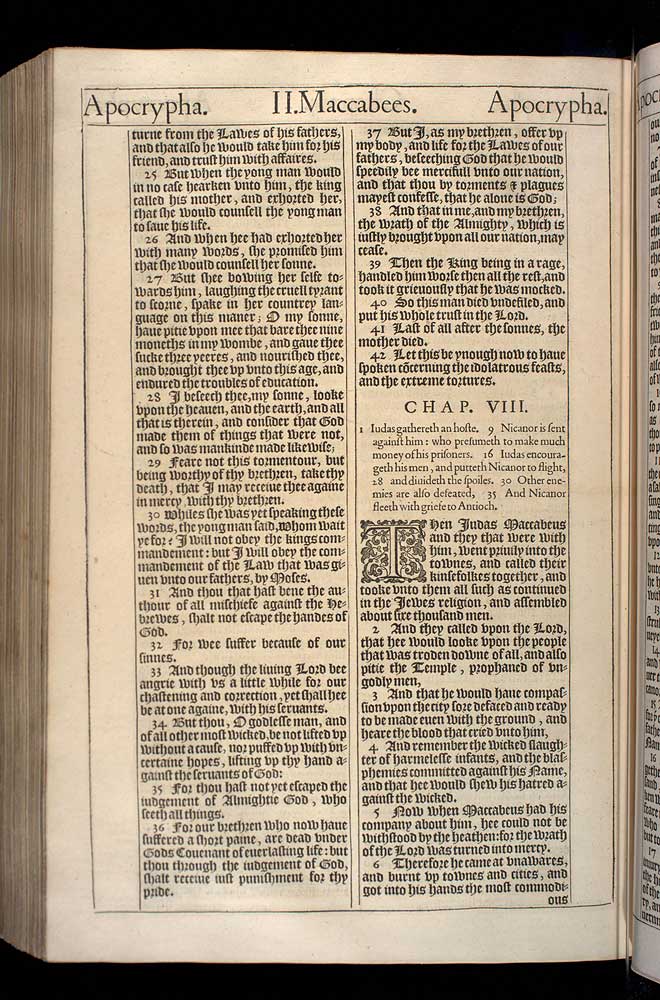 View this 2. Maccabees chapter 7 scan at a larger size

The constancie and cruell death of seuen brethren and their mother in one day, because they would not eate swines flesh at the kings commandement.

1 It came to passe also that seuen brethren with their mother were taken, and compelled by the king against the lawe to taste swines flesh, and were tormented with scourges, and whips:

2 But one of them that spake first said thus: What wouldest thou aske, or learne of vs? we are ready to die, rather then to transgresse the lawes of our fathers.

3 Then the king being in a rage, commanded pannes, and caldrons to be made whot.

4 Which forthwith being heated, he commanded to cut out the tongue of him that spake first, and to cut off the vtmost parts of his body, the rest of his brethren, and his mother looking on.

5 Now when he was thus maimed in all his members, he commanded him being yet aliue, to be brought to the fire, and to be fried in the panne: and as the vapour of the panne was for a good space dispersed, they exhorted one another, with the mother, to die manfully, saying thus:

6 The Lord God looketh vpon vs, and in trueth hath comfort in vs, as Moises in his song, which witnessed to their faces declared, saying, And he shall be comforted in his seruants.6

7 So when the first was dead, after this maner, they brought the second to make him a mocking stocke: and when they had pulled off the skin of his head with the haire, they asked him, Wilt thou eate before thou bee punished throughout euery member of thy body?

8 But hee answered in his owne language, and said, No. Wherefore hee also receiued the next torment in order, as the former did.

9 And when hee was at the last gaspe, hee said, Thou like a fury takest vs out of this present life, but the king of the world shall raise vs vp, who haue died for his lawes, vnto euerlasting life.

10 After him was the third made a mocking stocke, and when he was required, he put out his tongue, and that right soone, holding forth his hands manfully,

11 And said couragiously, These I had from heauen, and for his lawes I despise them, and from him I hope to receiue them againe.

12 Insomuch that the king, and they that were with him marueiled at the yong mans courage, for that he nothing regarded the paines.

13 Now when this man was dead also, they tormented and mangled the fourth in like maner.

14 So when he was ready to die, he said thus, It is good, being put to death by men, to looke for hope from God to be raised vp againe by him: as for thee thou shalt haue no resurrection to life.

15 Afterward they brought the fift also, and mangled him.

16 Then looked hee vnto the king and said, Thou hast power ouer men, thou art corruptible, thou doest what thou wilt, yet thinke not that our nation is forsaken of God.

17 But abide a while, and behold his great power, how he will torment thee, and thy seed.

18 After him also they brought the sixt, who being ready to die, said, Be not deceiued without cause: for we suffer these things for our selues, hauing sinned against our God. Therefore marueilous things are done (vnto vs.)

19 But thinke not thou that takest in hand to striue against God, that thou shalt escape vnpunished.

20 But the mother was marueilous aboue all, and worthy of honorable memorie: for when shee sawe her seuen sonnes slaine within the space of one day, she bare it with a good courage, because of the hope that she had in þe Lord

21 Yea she exhorted euery one of them in her owne language, filled with couragious spirits, and stirring vp her womanish thoughts, with a manly stomacke, she said vnto them,

22 I cannot tell how you came into my wombe: for I neither gaue you breath, nor life, neither was it I that formed the mēbers of euery one of you.

23 But doubtlesse the Creator of the world, who formed the generation of man, and found out the beginning of all things, wil also of his owne mercy giue you breath, and life againe, as you now regard not your owne selues for his Lawes sake.

24 Now Antiochus thinking himselfe despised, and suspecting it to be a reprochfull speach, whiles the yongest was yet aliue, did not onely exhort him by wordes, but also assured him with oathes, that he would make him both a rich, and a happy man, if hee would turne from the Lawes of his fathers, and that also he would take him for his friend, and trust him with affaires.

25 But when the yong man would in no case hearken vnto him, the king called his mother, and exhorted her, that she would counsell the yong man to saue his life.

26 And when hee had exhorted her with many words, she promised him that she would counsell her sonne.

27 But shee bowing her selfe towards him, laughing the cruell tyrant to scorne, spake in her countrey language on this maner; O my sonne, haue pitie vpon mee that bare thee nine moneths in my wombe, and gaue thee sucke three yeeres, and nourished thee, and brought thee vp vnto this age, and endured the troubles of education.

28 I beseech thee, my sonne, looke vpon the heauen, and the earth, and all that is therein, and consider that God made them of things that were not, and so was mankinde made likewise;

29 Feare not this tormentour, but being worthy of thy brethren, take thy death, that I may receiue thee againe in mercy with thy brethren.

30 Whiles she was yet speaking these words, the yong man said, Whom wait ye for? I will not obey the kings commandement: but I will obey the commandement of the Law that was giuen vnto our fathers, by Moses.

31 And thou that hast bene the authour of all mischiefe against the Hebrewes, shalt not escape the handes of God.

32 For wee suffer because of our sinnes.

33 And though the liuing Lord bee angrie with vs a little while for our chastening and correction, yet shall hee be at one againe, with his seruants.

34 But thou, O godlesse man, and of all other most wicked, be not lifted vp without a cause, nor puffed vp with vncertaine hopes, lifting vp thy hand against the seruants of God:

35 For thou hast not yet escaped the iudgement of Almightie God, who seeth all things.

36 For our brethren who now haue suffered a short paine, are dead vnder Gods Couenant of euerlasting life: but thou through the iudgement of God, shalt receiue iust punishment for thy pride.

37 But I, as my brethren, offer vp my body, and life for the Lawes of our fathers, beseeching God that he would speedily bee mercifull vnto our nation, and that thou by torments & plagues mayest confesse, that he alone is God;

38 And that in me, and my brethren, the wrath of the Almighty, which is iustly brought vpon all our nation, may cease.

39 Then the King being in a rage, handled him worse then all the rest, and took it grieuously that he was mocked.

40 So this man died vndefiled, and put his whole trust in the Lord.

41 Last of all after the sonnes, the mother died.

42 Let this be ynough now to haue spoken cōcerning the idolatrous feasts, and the extreme tortures.