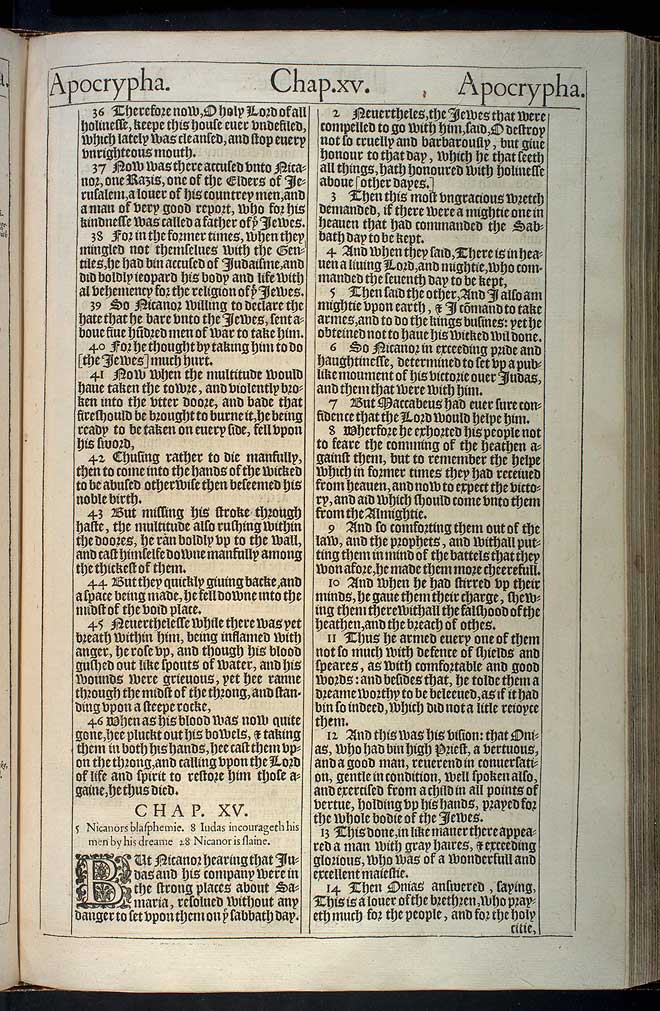 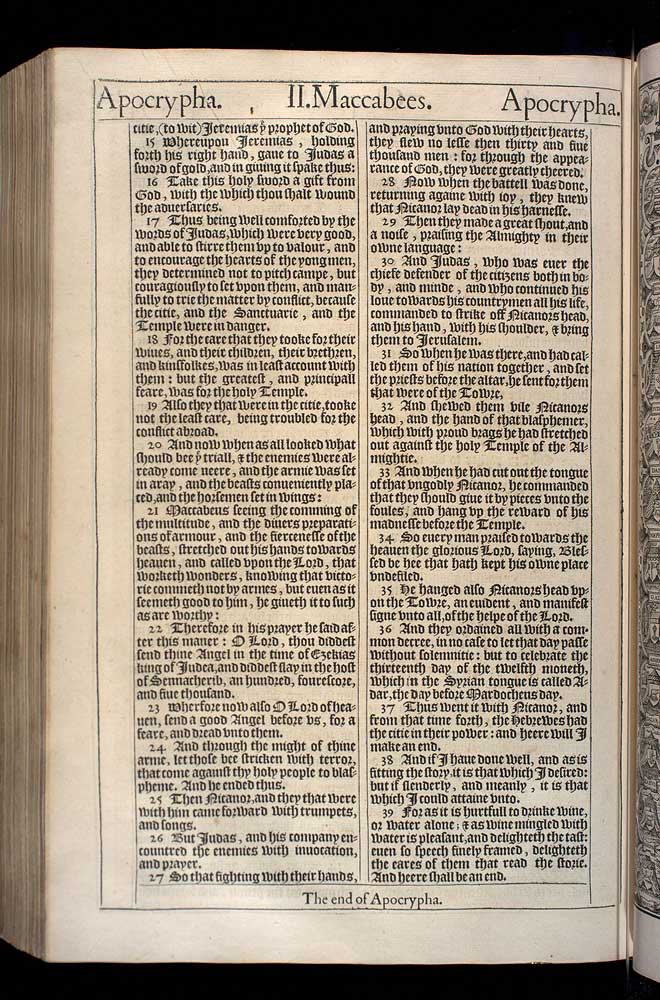 View this 2. Maccabees chapter 15 scan at a larger size

1 But Nicanor hearing that Iudas and his company were in the strong places about Samaria, resolued without any danger to set vpon them on þe sabbath day.

2 Neuertheles, the Iewes that were compelled to go with him, said, O destroy not so cruelly and barbarously, but giue honour to that day, which he that seeth all things, hath honoured with holinesse aboue [other dayes.]

3 Then this most vngracious wretch demanded, if there were a mightie one in heauen that had commanded the Sabbath day to be kept.

4 And when they said, There is in heauen a liuing Lord, and mightie, who commanded the seuenth day to be kept,

5 Then said the other, And I also am mightie vpon earth, & I cōmand to take armes, and to do the kings busines: yet he obteined not to haue his wicked wil done.

6 So Nicanor in exceeding pride and haughtinesse, determined to set vp a publike moument of his victorie ouer Iudas, and them that were with him.

7 But Maccabeus had euer sure confidence that the Lord would helpe him.

8 Wherfore he exhorted his people not to feare the comming of the heathen against them, but to remember the helpe which in former times they had receiued from heauen, and now to expect the victory, and aid which should come vnto them from the Almightie.

9 And so comforting them out of the law, and the prophets, and withall putting them in mind of the battels that they won afore, he made them more cheerefull.

10 And when he had stirred vp their minds, he gaue them their charge, shewing them therewithall the falshood of the heathen, and the breach of othes.

11 Thus he armed euery one of them not so much with defence of shields and speares, as with comfortable and good words: and besides that, he tolde them a dreame worthy to be beleeued, as if it had bin so indeed, which did not a litle reioyce them.

12 And this was his vision: that Onias, who had bin high Priest, a vertuous, and a good man, reuerend in conuersation, gentle in condition, well spoken also, and exercised from a child in all points of vertue, holding vp his hands, prayed for the whole bodie of the Iewes.

13 This done, in like maner there appeared a man with gray haires, & exceeding glorious, who was of a wonderfull and excellent maiestie.

14 Then Onias answered, saying, This is a louer of the brethren, who prayeth much for the people, and for the holy citie, (to wit) Ieremias þe prophet of God.

15 Whereupon Ieremias, holding forth his right hand, gaue to Iudas a sword of gold, and in giuing it spake thus:

16 Take this holy sword a gift from God, with the which thou shalt wound the aduersaries.

17 Thus being well comforted by the words of Iudas, which were very good, and able to stirre them vp to valour, and to encourage the hearts of the yong men, they determined not to pitch campe, but couragiously to set vpon them, and manfully to trie the matter by conflict, because the citie, and the Sanctuarie, and the Temple were in danger.

18 For the care that they tooke for their wiues, and their children, their brethren, and kinsfolkes, was in least account with them: but the greatest, and principall feare, was for the holy Temple.

19 Also they that were in the citie, tooke not the least care, being troubled for the conflict abroad.

20 And now when as all looked what should bee þe triall, & the enemies were already come neere, and the armie was set in aray, and the beasts conueniently placed, and the horsemen set in wings:

21 Maccabeus seeing the comming of the multitude, and the diuers preparations of armour, and the fiercenesse of the beasts, stretched out his hands towards heauen, and called vpon the Lord, that worketh wonders, knowing that victorie commeth not by armes, but euen as it seemeth good to him, he giueth it to such as are worthy:

22 Therefore in his prayer he said after this maner: O Lord, thou diddest send thine Angel in the time of Ezekias king of Iudea, and diddest slay in the host of Sennacherib, an hundred, fourescore, and fiue thousand.

23 Wherfore now also O Lord of heauen, send a good Angel before vs, for a feare, and dread vnto them.

24 And through the might of thine arme, let those bee stricken with terror, that come against thy holy people to blaspheme. And he ended thus.

25 Then Nicanor, and they that were with him came forward with trumpets, and songs.

26 But Iudas, and his company encountred the enemies with inuocation, and prayer.

27 So that fighting with their hands, and praying vnto God with their hearts, they slew no lesse then thirty and fiue thousand men: for through the appearance of God, they were greatly cheered.

28 Now when the battell was done, returning againe with ioy, they knew that Nicanor lay dead in his harnesse.

29 Then they made a great shout, and a noise, praising the Almighty in their owne language:

30 And Iudas, who was euer the chiefe defender of the citizens both in body, and minde, and who continued his loue towards his countrymen all his life, commanded to strike off Nicanors head, and his hand, with his shoulder, & bring them to Ierusalem.

31 So when he was there, and had called them of his nation together, and set the priests before the altar, he sent for them that were of the Towre,

32 And shewed them vile Nicanors head, and the hand of that blasphemer, which with proud brags he had stretched out against the holy Temple of the Almightie.

33 And when he had cut out the tongue of that vngodly Nicanor, he commanded that they should giue it by pieces vnto the foules, and hang vp the reward of his madnesse before the Temple.

34 So euery man praised towards the heauen the glorious Lord, saying, Blessed be hee that hath kept his owne place vndefiled.

35 He hanged also Nicanors head vpon the Towre, an euident, and manifest signe vnto all, of the helpe of the Lord.

36 And they ordained all with a common decree, in no case to let that day passe without solemnitie: but to celebrate the thirteenth day of the twelfth moneth, which in the Syrian tongue is called Adar, the day before Mardocheus day.

37 Thus went it with Nicanor, and from that time forth, the Hebrewes had the citie in their power: and heere will I make an end.

39 For as it is hurtfull to drinke wine, or water alone; & as wine mingled with water is pleasant, and delighteth the tast: euen so speech finely framed, delighteth the eares of them that read the storie. And heere shall be an end.