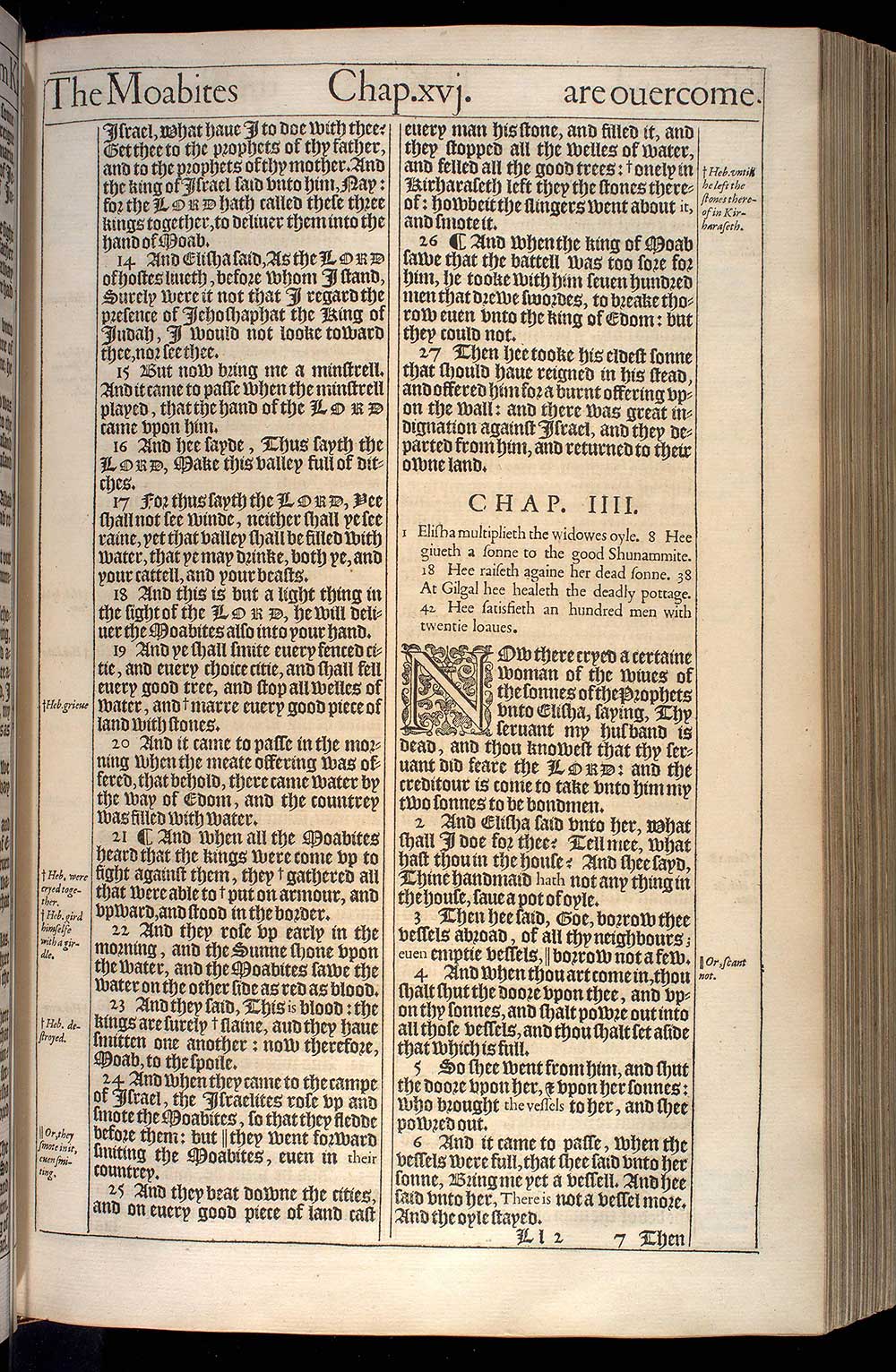 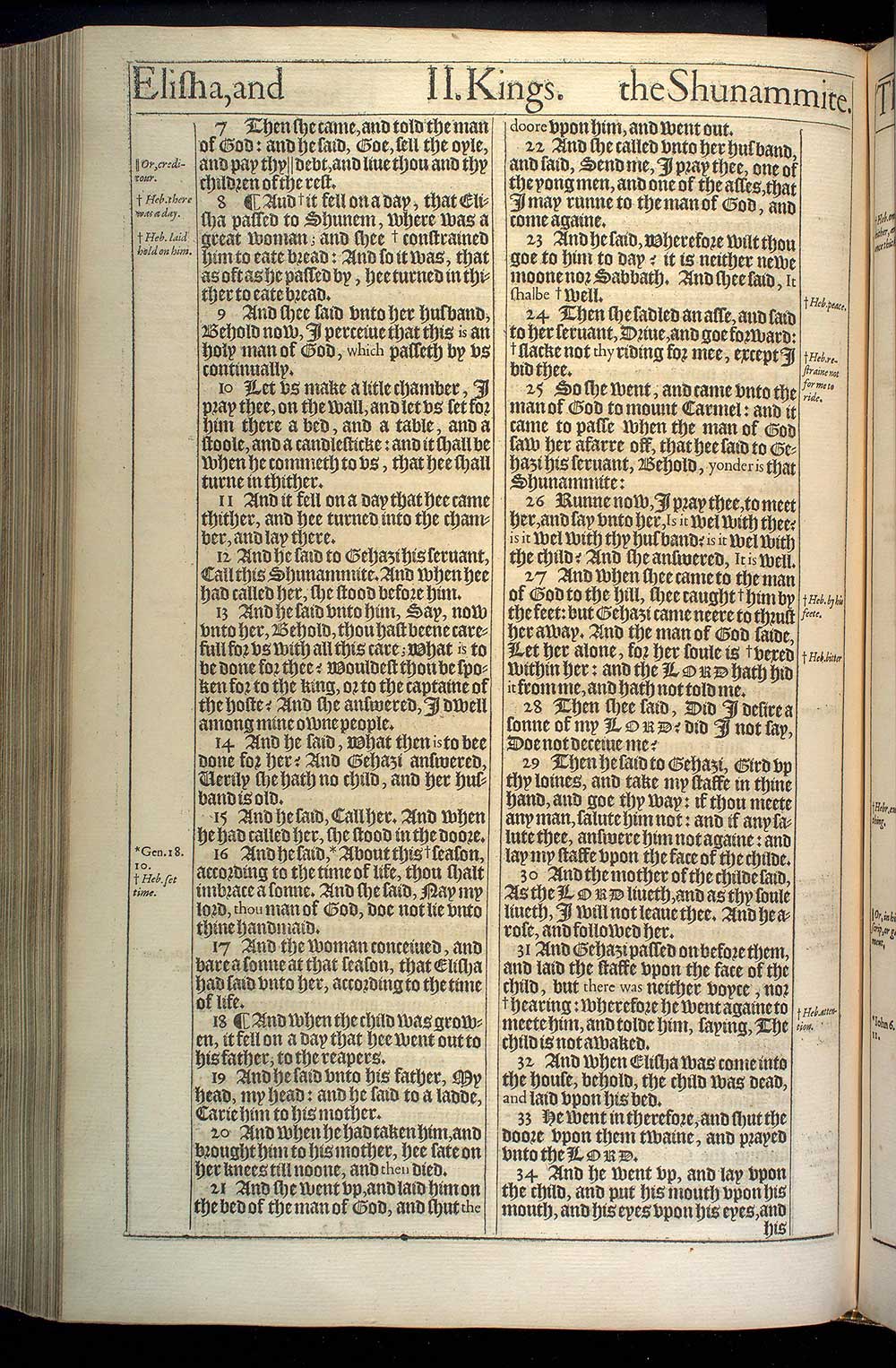 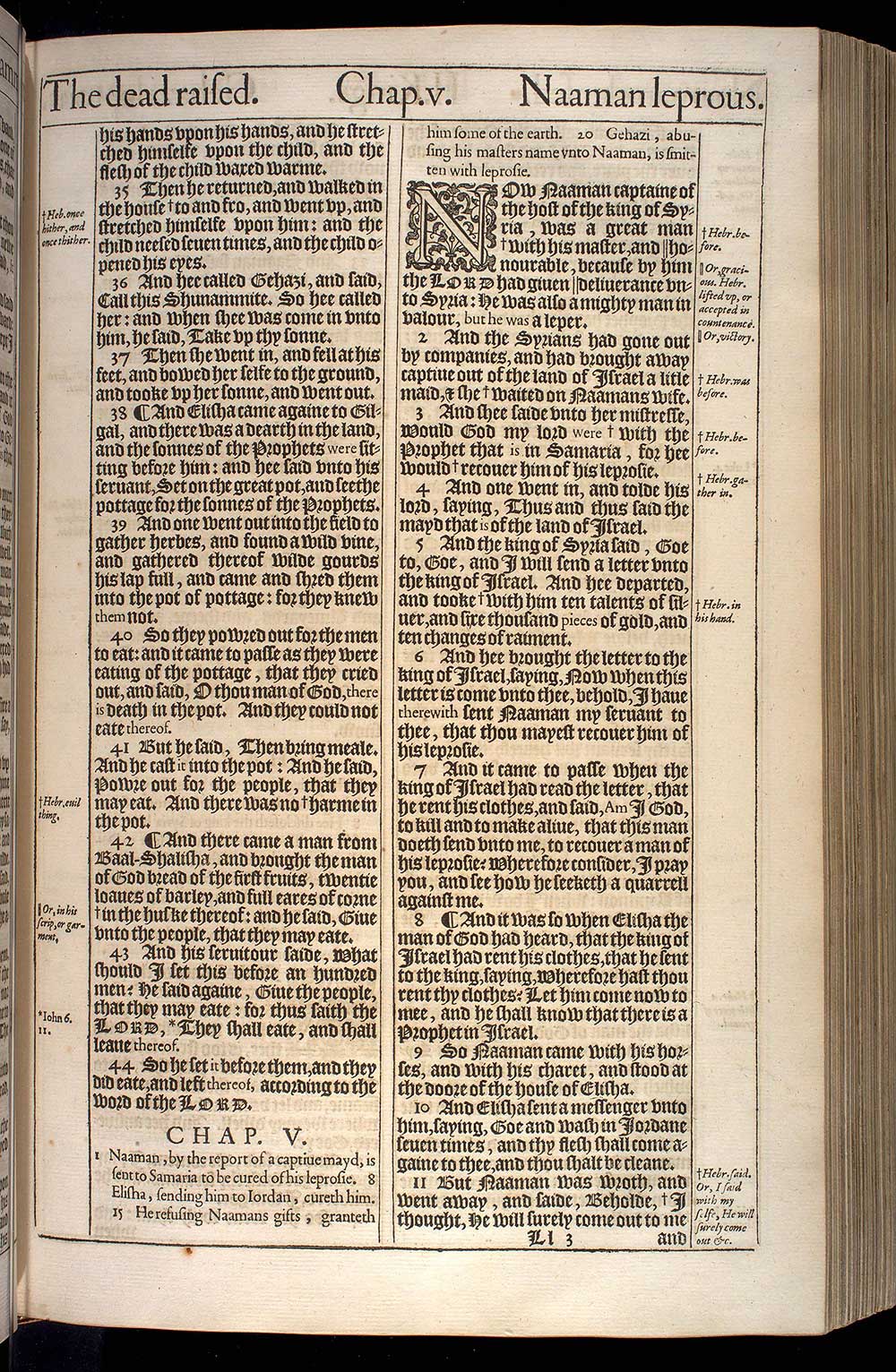 1Now there cryed a certaine woman of the wiues of the sonnes of the Prophets vnto Elisha, saying, Thy seruant my husband is dead, and thou knowest that thy seruant did feare the Lord: and the creditour is come to take vnto him my two sonnes to be bondmen.

2And Elisha said vnto her, What shall I doe for thee? Tell mee, what hast thou in the house? And shee sayd, Thine handmaid hath not any thing in the house, saue a pot of oyle.

3Then hee said, Goe, borrow thee vessels abroad, of all thy neighbours; euen emptie vessels, borrow not a few.3

4And when thou art come in, thou shalt shut the doore vpon thee, and vpon thy sonnes, and shalt powre out into all those vessels, and thou shalt set aside that which is full.

5So shee went from him, and shut the doore vpon her, & vpon her sonnes: who brought the vessels to her, and shee powred out.

Elisha, and the Shunammite.

7Then she came, and told the man of God: and he said, Goe, sell the oyle, and pay thy debt, and liue thou and thy children of the rest.7

8¶ And it fell on a day, that Elisha passed to Shunem, where was a great woman; and shee constrained him to eate bread: And so it was, that as oft as he passed by, hee turned in thither to eate bread.8

9And shee said vnto her husband, Behold now, I perceiue that this is an holy man of God, which passeth by vs continually.

10Let vs make a litle chamber, I pray thee, on the wall, and let vs set for him there a bed, and a table, and a stoole, and a candlesticke: and it shall be when he commeth to vs, that hee shall turne in thither.

11And it fell on a day that hee came thither, and hee turned into the chamber, and lay there.

12And he said to Gehazi his seruant, Call this Shunammite. And when hee had called her, she stood before him.

13And he said vnto him, Say, now vnto her, Behold, thou hast beene carefull for vs with all this care; What is to be done for thee? Wouldest thou be spoken for to the king, or to the captaine of the hoste? And she answered, I dwell among mine owne people.

14And he said, What then is to bee done for her? And Gehazi answered, Uerily she hath no child, and her husband is old.

15And he said, Call her. And when he had called her, she stood in the doore.

16And he said, About this season, according to the time of life, thou shalt imbrace a sonne. And she said, Nay my lord, thou man of God, doe not lie vnto thine handmaid.16

17And the woman conceiued, and bare a sonne at that season, that Elisha had said vnto her, according to the time of life.

18¶ And when the child was growen, it fell on a day that hee went out to his father, to the reapers.

19And he said vnto his father, My head, my head: and he said to a ladde, Carie him to his mother.

20And when he had taken him, and brought him to his mother, hee sate on her knees till noone, and then died.

Elisha, and the Shunammite.

21And she went vp, and laid him on the bed of the man of God, and shut the doore vpon him, and went out.

22And she called vnto her husband, and said, Send me, I pray thee, one of the yong men, and one of the asses, that I may runne to the man of God, and come againe.

23And he said, Wherefore wilt thou goe to him to day? it is neither newe moone nor Sabbath. And shee said, It shalbe well.23

24Then she sadled an asse, and said to her seruant, Driue, and goe forward: slacke not thy riding for mee, except I bid thee.24

25So she went, and came vnto the man of God to mount Carmel: and it came to passe when the man of God saw her afarre off, that hee said to Gehazi his seruant, Behold, yonder is that Shunammite:

27And when shee came to the man of God to the hill, shee caught him by the feet: but Gehazi came neere to thrust her away. And the man of God saide, Let her alone, for her soule is vexed within her: and the Lord hath hid it from me, and hath not told me.27

28Then shee said, Did I desire a sonne of my Lord ? did I not say, Doe not deceiue me?

29Then he said to Gehazi, Gird vp thy loines, and take my staffe in thine hand, and goe thy way: if thou meete any man, salute him not: and if any salute thee, answere him not againe: and lay my staffe vpon the face of the childe.

30And the mother of the childe said, As the Lord liueth, and as thy soule liueth, I will not leaue thee. And he arose, and followed her.

31And Gehazi passed on before them, and laid the staffe vpon the face of the child, but there was neither voyce, nor hearing: wherefore he went againe to meete him, and tolde him, saying, The child is not awaked.31

32And when Elisha was come into the house, behold, the child was dead, and laid vpon his bed.

33He went in therefore, and shut the doore vpon them twaine, and prayed vnto the Lord.

35Then he returned, and walked in the house to and fro, and went vp, and stretched himselfe vpon him: and the child neesed seuen times, and the child opened his eyes.35

36And hee called Gehazi, and said, Call this Shunammite. So hee called her: and when shee was come in vnto him, he said, Take vp thy sonne.

37Then she went in, and fell at his feet, and bowed her selfe to the ground, and tooke vp her sonne, and went out.

39And one went out into the field to gather herbes, and found a wild vine, and gathered thereof wilde gourds his lap full, and came and shred them into the pot of pottage: for they knew them not.

40So they powred out for the men to eat: and it came to passe as they were eating of the pottage, that they cried out, and said, O thou man of God, there is death in the pot. And they could not eate thereof.

41But he said, Then bring meale. And he cast it into the pot: And he said, Powre out for the people, that they may eat. And there was no harme in the pot.41

42¶ And there came a man from Baal-Shalisha, and brought the man of God bread of the first fruits, twentie loaues of barley, and full eares of corne in the huske thereof: and he said, Giue vnto the people, that they may eate.42

43And his seruitour saide, What should I set this before an hundred men? He said againe, Giue the people, that they may eate: for thus saith the Lord, They shall eate, and shall leaue thereof.43

44So he set it before them, and they did eate, and left thereof, according to the word of the Lord.