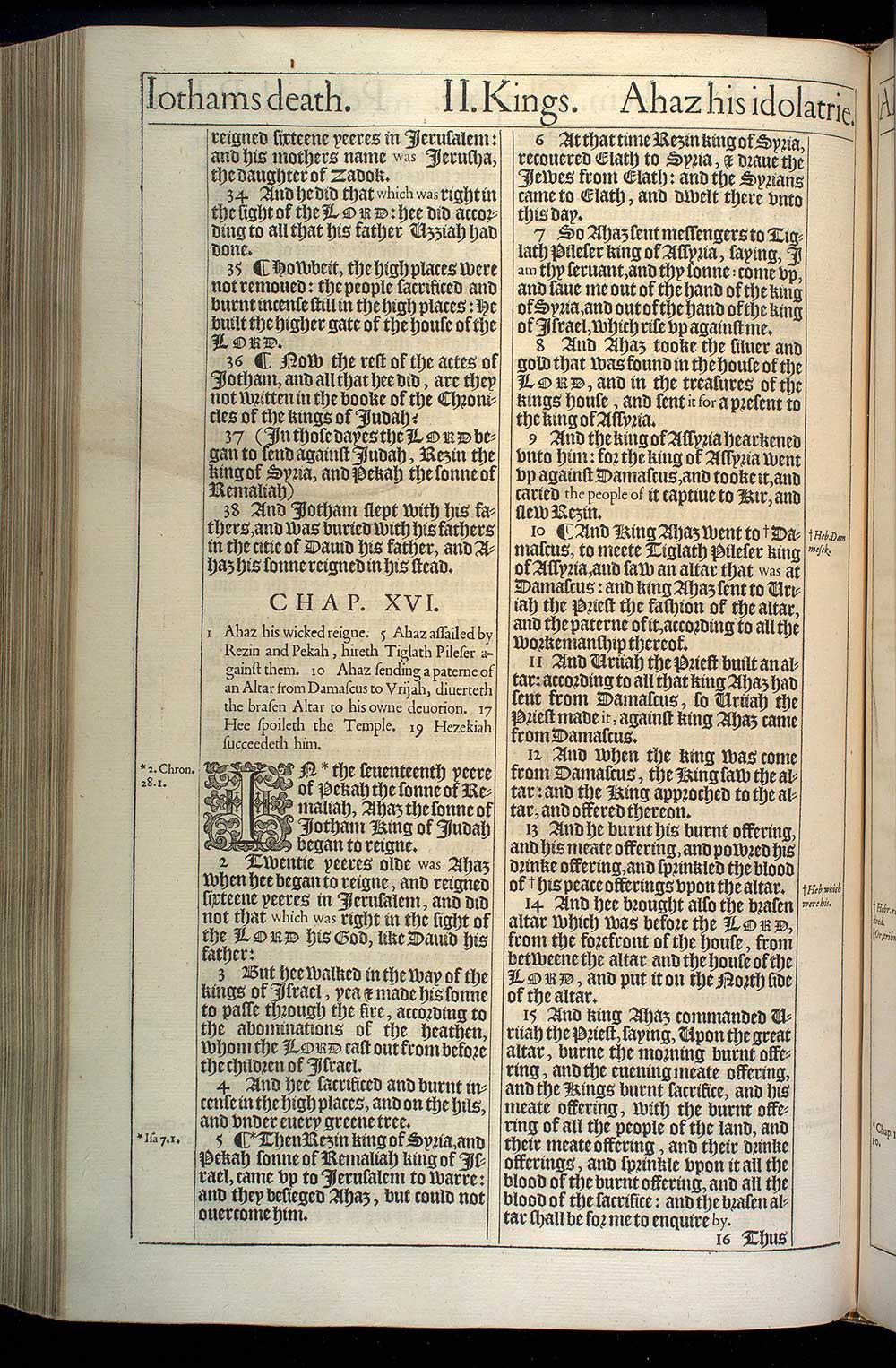 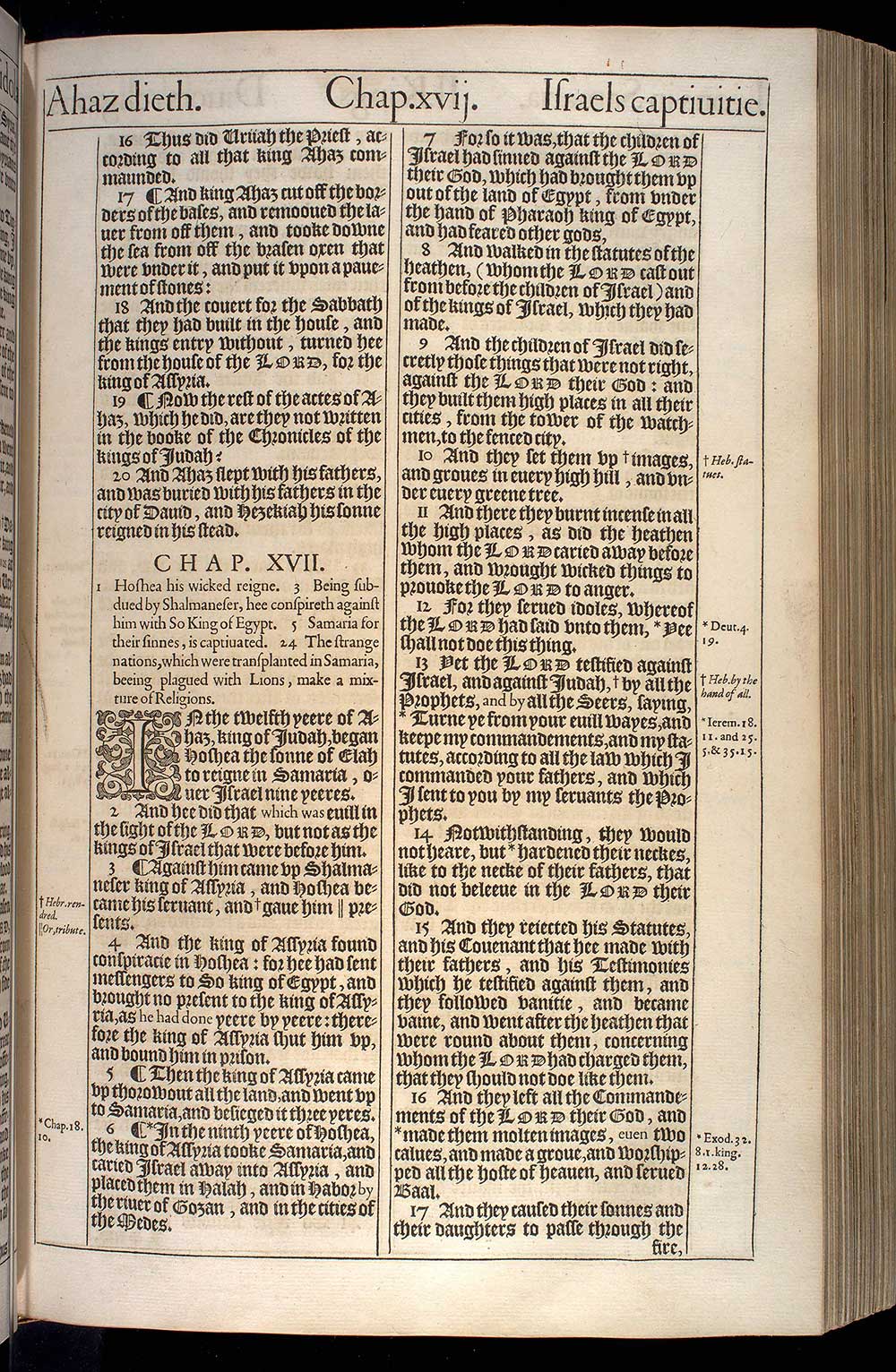 1 Ahaz his wicked reigne. 5 Ahaz assailed by Rezin and Pekah, hireth Tiglath Pileser against them. 10 Ahaz sending a paterne of an Altar from Damascus to Urijah, diuerteth the brasen Altar to his owne deuotion. 17 Hee spoileth the Temple. 19 Hezekiah succeedeth him.

1In the seuenteenth yeere of Pekah the sonne of Remaliah, Ahaz the sonne of Iotham King of Iudah began to reigne.1

2Twentie yeeres olde was Ahaz when hee began to reigne, and reigned sixteene yeeres in Ierusalem, and did not that which was right in the sight of the Lord his God, like Dauid his father:

3But hee walked in the way of the kings of Israel, yea & made his sonne to passe through the fire, according to the abominations of the heathen, whom the Lord cast out from before the children of Israel.

4And hee sacrificed and burnt incense in the high places, and on the hils, and vnder euery greene tree.

5¶ Then Rezin king of Syria, and Pekah sonne of Remaliah king of Israel, came vp to Ierusalem to warre: and they besieged Ahaz, but could not ouercome him.5

6At that time Rezin king of Syria, recouered Elath to Syria, & draue the Iewes from Elath: and the Syrians came to Elath, and dwelt there vnto this day.

8And Ahaz tooke the siluer and gold that was found in the house of the Lord, and in the treasures of the kings house, and sent it for a present to the king of Assyria.

10¶ And King Ahaz went to Damascus, to meete Tiglath Pileser king of Assyria, and saw an altar that was at Damascus: and king Ahaz sent to Uriiah the Priest the fashion of the altar, and the paterne of it, according to all the workemanship thereof.10

12And when the king was come from Damascus, the King saw the altar: and the King approched to the altar, and offered thereon.

14And hee brought also the brasen altar which was before the Lord, from the forefront of the house, from betweene the altar and the house of the Lord, and put it on the North side of the altar.

16Thus did Uriiah the Priest, according to all that king Ahaz commaunded.

17¶ And king Ahaz cut off the borders of the bases, and remooued the lauer from off them, and tooke downe the sea from off the brasen oxen that were vnder it, and put it vpon a pauement of stones:

18And the couert for the Sabbath that they had built in the house, and the kings entry without, turned hee from the house of the Lord, for the king of Assyria.

19¶ Now the rest of the actes of Ahaz, which he did, are they not written in the booke of the Chronicles of the kings of Iudah?