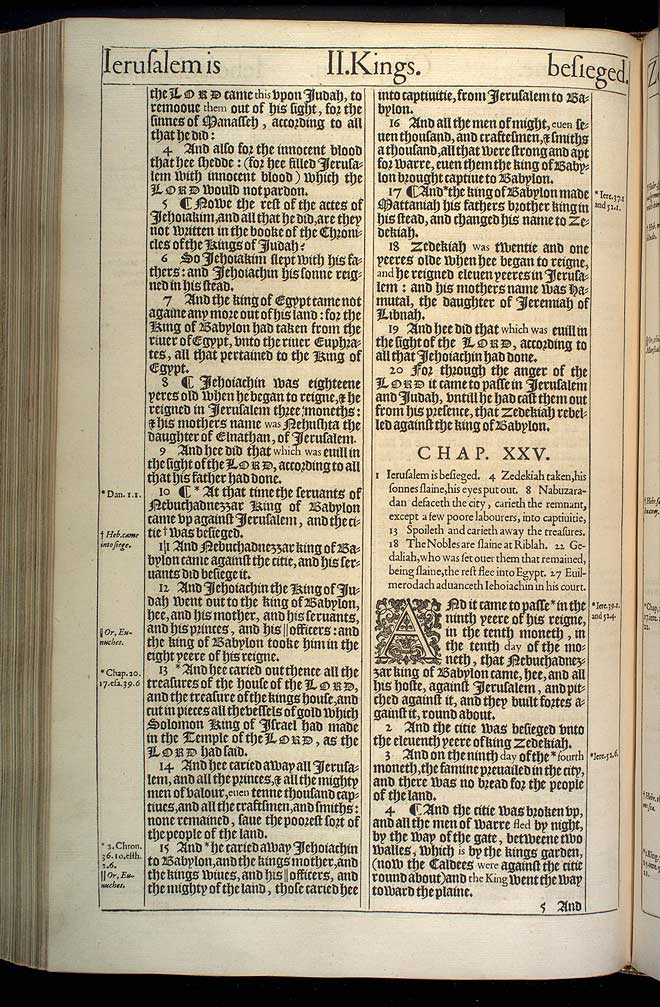 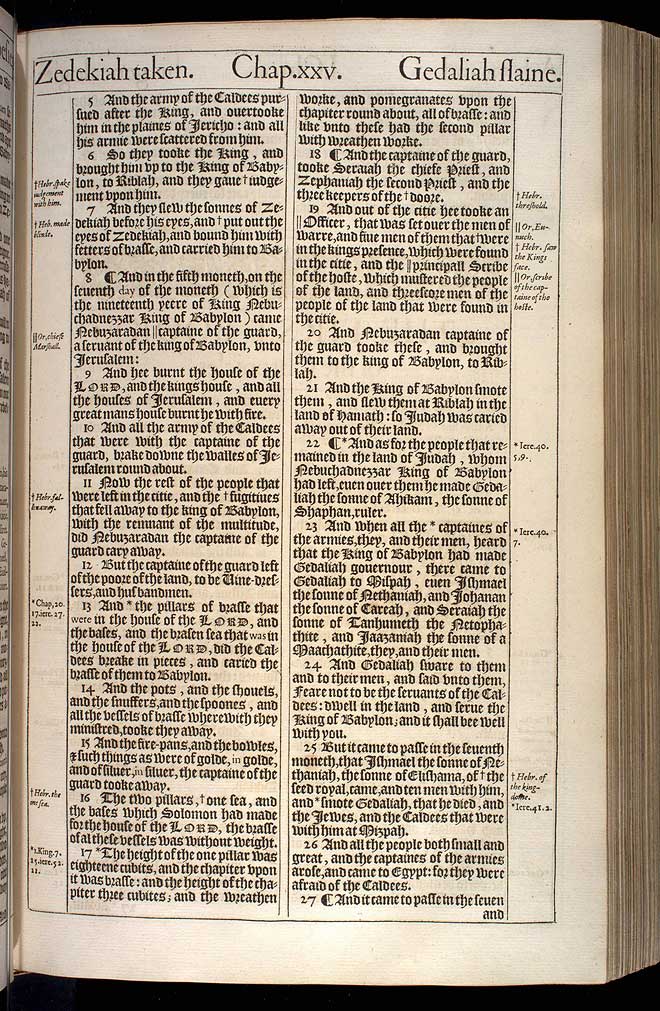 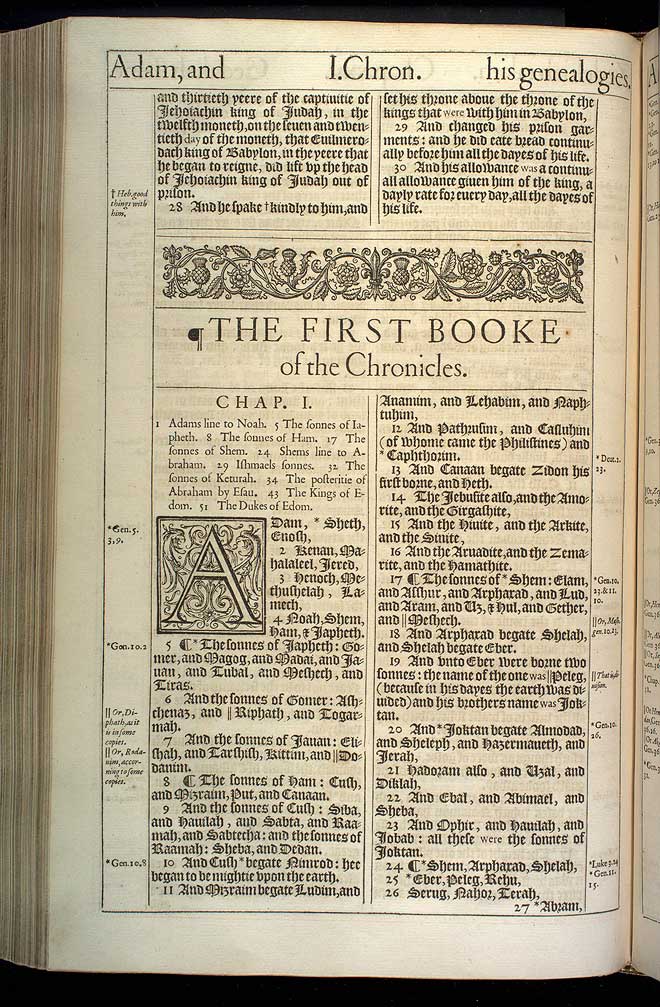 View this 2. Kings chapter 25 scan at a larger size

1 Ierusalem is besieged. 4 Zedekiah taken, his sonnes slaine, his eyes put out. 8 Nabuzaradan defaceth the city, carieth the remnant, except a few poore labourers, into captiuitie, 13 Spoileth and carieth away the treasures. 18 The Nobles are slaine at Riblah. 22 Gedaliah, who was set ouer them that remained, being slaine, the rest flee into Egypt. 27 Euilmerodach aduanceth Iehoiachin in his court.

1 And it came to passe in the ninth yeere of his reigne, in the tenth moneth, in the tenth day of the moneth, that Nebuchadnezzar king of Babylon came, hee, and all his hoste, against Ierusalem, and pitched against it, and they built fortes against it, round about.1

2 And the citie was besieged vnto the eleuenth yeere of king Zedekiah.

3 And on the ninth day of the fourth moneth, the famine preuailed in the city, and there was no bread for the people of the land.3

4 ¶ And the citie was broken vp, and all the men of warre fled by night, by the way of the gate, betweene two walles, which is by the kings garden, (now the Caldees were against the citie round about) and the King went the way toward the plaine.

5 And the army of the Caldees pursued after the King, and ouertooke him in the plaines of Iericho: and all his armie were scattered from him.

6 So they tooke the King, and brought him vp to the King of Babylon, to Riblah, and they gaue iudgement vpon him.6

7 And they slew the sonnes of Zedekiah before his eyes, and put out the eyes of Zedekiah, and bound him with fetters of brasse, and carried him to Babylon.7

8 ¶ And in the fifth moneth, on the seuenth day of the moneth (which is the nineteenth yeere of King Nebuchadnezzar King of Babylon) came Nebuzaradan captaine of the guard, a seruant of the king of Babylon, vnto Ierusalem:8

9 And hee burnt the house of the Lord, and the kings house, and all the houses of Ierusalem, and euery great mans house burnt he with fire.

10 And all the army of the Caldees that were with the captaine of the guard, brake downe the walles of Ierusalem round about.

11 Now the rest of the people that were left in the citie, and the fugitiues that fell away to the king of Babylon, with the remnant of the multitude, did Nebuzaradan the captaine of the guard cary away.11

12 But the captaine of the guard left of the poore of the land, to be Uine-dressers, and husbandmen.

14 And the pots, and the shouels, and the snuffers, and the spoones, and all the vessels of brasse wherewith they ministred, tooke they away.

15 And the fire-pans, and the bowles, & such things as were of golde, in golde, and of siluer, in siluer, the captaine of the guard tooke away.

16 The two pillars, one sea, and the bases which Solomon had made for the house of the Lord, the brasse of al these vessels was without weight.16

18 ¶ And the captaine of the guard, tooke Seraiah the chiefe Priest, and Zephaniah the second Priest, and the three keepers of the doore.18

20 And Nebuzaradan captaine of the guard tooke these, and brought them to the king of Babylon, to Riblah.

21 And the King of Babylon smote them, and slew them at Riblah in the land of Hamath: so Iudah was caried away out of their land.

22 ¶ And as for the people that remained in the land of Iudah, whom Nebuchadnezzar King of Babylon had left, euen ouer them he made Gedaliah the sonne of Ahikam, the sonne of Shaphan, ruler.22

24 And Gedaliah sware to them and to their men, and said vnto them, Feare not to be the seruants of the Caldees: dwell in the land, and serue the King of Babylon; and it shall bee well with you.

25 But it came to passe in the seuenth moneth, that Ishmael the sonne of Nethaniah, the sonne of Elishama, of the seed royal, came, and ten men with him, and smote Gedaliah, that he died, and the Iewes, and the Caldees that were with him at Mizpah.25

26 And all the people both small and great, and the captaines of the armies arose, and came to Egypt: for they were afraid of the Caldees.

28 And he spake kindly to him, and set his throne aboue the throne of the kings that were with him in Babylon,28

29 And changed his prison garments: and he did eate bread continually before him all the dayes of his life.

30 And his allowance was a continuall allowance giuen him of the king, a dayly rate for euery day, all the dayes of his life.