1 And it came to pass, when the LORD would take up Elijah into heaven by a whirlwind, that Elijah went with Elisha from Gilgal.

2 And Elijah said unto Elisha, Tarry here, I pray thee; for the LORD hath sent me to Bethel. And Elisha said unto him, As the LORD liveth, and as thy soul liveth, I will not leave thee. So they went down to Bethel.

3 And the sons of the prophets that were at Bethel came forth to Elisha, and said unto him, Knowest thou that the LORD will take away thy master from thy head to day? And he said, Yea, I know it; hold ye your peace.

4 And Elijah said unto him, Elisha, tarry here, I pray thee; for the LORD hath sent me to Jericho. And he said, As the LORD liveth, and as thy soul liveth, I will not leave thee. So they came to Jericho.

5 And the sons of the prophets that were at Jericho came to Elisha, and said unto him, Knowest thou that the LORD will take away thy master from thy head to day? And he answered, Yea, I know it; hold ye your peace.

6 And Elijah said unto him, Tarry, I pray thee, here; for the LORD hath sent me to Jordan. And he said, As the LORD liveth, and as thy soul liveth, I will not leave thee. And they two went on.

7 And fifty men of the sons of the prophets went, and stood to view afar off: and they two stood by Jordan.

8 And Elijah took his mantle, and wrapped it together, and smote the waters, and they were divided hither and thither, so that they two went over on dry ground.

9 And it came to pass, when they were gone over, that Elijah said unto Elisha, Ask what I shall do for thee, before I be taken away from thee. And Elisha said, I pray thee, let a double portion of thy spirit be upon me.

10 And he said, Thou hast asked a hard thing: nevertheless, if thou see me when I am taken from thee, it shall be so unto thee; but if not, it shall not be so.

11 And it came to pass, as they still went on, and talked, that, behold, there appeared a chariot of fire, and horses of fire, and parted them both asunder; and Elijah went up by a whirlwind into heaven.

12 And Elisha saw it, and he cried, My father, my father, the chariot of Israel, and the horsemen thereof. And he saw him no more: and he took hold of his own clothes, and rent them in two pieces.

13 He took up also the mantle of Elijah that fell from him, and went back, and stood by the bank of Jordan;

14 And he took the mantle of Elijah that fell from him, and smote the waters, and said, Where is the LORD God of Elijah? and when he also had smitten the waters, they parted hither and thither: and Elisha went over.

15 And when the sons of the prophets which were to view at Jericho saw him, they said, The spirit of Elijah doth rest on Elisha. And they came to meet him, and bowed themselves to the ground before him.

16 And they said unto him, Behold now, there be with thy servants fifty strong men; let them go, we pray thee, and seek thy master: lest peradventure the Spirit of the LORD hath taken him up, and cast him upon some mountain, or into some valley. And he said, Ye shall not send.

17 And when they urged him till he was ashamed, he said, Send. They sent therefore fifty men; and they sought three days, but found him not.

18 And when they came again to him, (for he tarried at Jericho,) he said unto them, Did I not say unto you, Go not?

19 And the men of the city said unto Elisha, Behold, I pray thee, the situation of this city is pleasant, as my lord seeth: but the water is naught, and the ground barren.

20 And he said, Bring me a new cruse, and put salt therein. And they brought it to him.

21 And he went forth unto the spring of the waters, and cast the salt in there, and said, Thus saith the LORD, I have healed these waters; there shall not be from thence any more death or barren land.

22 So the waters were healed unto this day, according to the saying of Elisha which he spake.

24 And he turned back, and looked on them, and cursed them in the name of the LORD. And there came forth two she bears out of the wood, and tare forty and two children of them.

Elijah divides Jordan. (1-8) Elijah is taken up into heaven. (9-12) Elisha is manifested to be Elijah's successor. (13-18) Elisha heals the waters of Jericho, Those that mocked Elisha destroyed. (19-25)1-8 The Lord had let Elijah know that his time was at hand. He therefore went to the different schools of the prophets to give them his last exhortations and blessing. The removal of Elijah was a type and figure of the ascension of Christ, and the opening of the kingdom of heaven to all believers. Elisha had long followed Elijah, and he would not leave him now when he hoped for the parting blessing. Let not those who follow Christ come short by tiring at last. The waters of Jordan, of old, yielded to the ark; now, to the prophet's mantle, as a token of God's presence. When God will take up his faithful ones to heaven, death is the Jordan which they must pass through, and they find a way through it. The death of Christ has divided those waters, that the ransomed of the Lord may pass over. O death, where is thy sting, thy hurt, thy terror!

9-12 That fulness, from whence prophets and apostles had all their supply, still exists as of old, and we are told to ask large supplies from it. Diligent attendance upon Elijah, particularly in his last hours, would be proper means for Elisha to obtain much of his spirit. The comforts of departing saints, and their experiences, help both to gild our comforts and to strengthen our resolutions. Elijah is carried to heaven in a fiery chariot. Many questions might be asked about this, which could not be answered. Let it suffice that we are told, what his Lord, when he came, found him doing. He was engaged in serious discourse, encouraging and directing Elisha about the kingdom of God among men. We mistake, if we think preparation for heaven is carried on only by contemplation and acts of devotion. The chariot and horses appeared like fire, something very glorious, not for burning, but brightness. By the manner in which Elijah and Enoch were taken from this world, God gave a glimpse of the eternal life brought to light by the gospel, of the glory reserved for the bodies of the saints, and of the opening of the kingdom of heaven to all believers. It was also a figure of Christ's ascension. Though Elijah was gone triumphantly to heaven, yet this world could ill spare him. Surely their hearts are hard, who feel not, when God, by taking away faithful, useful men, calls for weeping and mourning. Elijah was to Israel, by his counsels, reproofs, and prayers, better than the strongest force of chariot and horse, and kept off the judgments of God. Christ bequeathed to his disciples his precious gospel, like Elijah's mantle; the token of the Divine power being exerted to overturn the empire of Satan, and to set up the kingdom of God in the world. The same gospel remains with us, though the miraculous powers are withdrawn, and it has Divine strength for the conversion and salvation of sinners.

13-18 Elijah left his mantle to Elisha; as a token of the descent of the Spirit upon him; it was more than if he had left him thousands of gold and silver. Elisha took it up, not as a sacred relic to be worshipped, but as a significant garment to be worn. Now that Elijah was taken to heaven, Elisha inquired, 1. After God; when our creature-comforts are removed, we have a God to go to, who lives for ever. 2. After the God that Elijah served, and honoured, and pleaded for. The Lord God of the holy prophets is the same yesterday, to-day, and for ever; but what will it avail us to have the mantles of those that are gone, their places, their books, if we have not their spirit, their God? See Elisha's dividing the river; God's people need not fear at last passing through the Jordan of death as on dry ground. The sons of the prophets made a needless search for Elijah. Wise men may yield to that, for the sake of peace, and the good opinion of others, which yet their judgment is against, as needless and fruitless. Traversing hills and valleys will never bring us to Elijah, but following the example of his holy faith and zeal will, in due time.

19-25 Observe the miracle of healing the waters. Prophets should make every place to which they come better for them, endeavouring to sweeten bitter spirits, and to make barren souls fruitful, by the word of God, which is like the salt cast into the water by Elisha. It was an apt emblem of the effect produced by the grace of God on the sinful heart of man. Whole families, towns, and cities, sometimes have a new appearance through the preaching of the gospel; wickedness and evil have been changed into fruitfulness in the works of righteousness, which are, through Christ, to the praise and glory of God. Here is a curse on the youths of Bethel, enough to destroy them; it was not a curse causeless, for it was Elisha's character, as God's prophet, that they abused. They bade him "go up," reflecting on the taking up of Elijah into heaven. The prophet acted by Divine impulse. If the Holy Spirit had not directed Elisha's solemn curse, the providence of God would not have followed it with judgment. The Lord must be glorified as a righteous God who hates sin, and will reckon for it. Let young persons be afraid of speaking wicked words, for God notices what they say. Let them not mock at any for defects in mind or body; especially it is at their peril, if they scoff at any for well doing. Let parents that would have comfort in their children, train them up well, and do their utmost betimes to drive out the foolishness that is bound up in their hearts. And what will be the anguish of those parents, at the day of judgment, who witness the everlasting condemnation of their offspring, occasioned by their own bad example, carelessness, or wicked teaching! 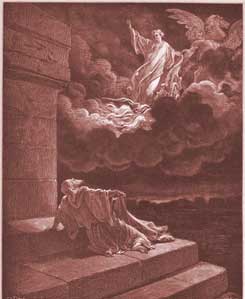 Elijah Ascends to Heaven in a Chariot of Fire