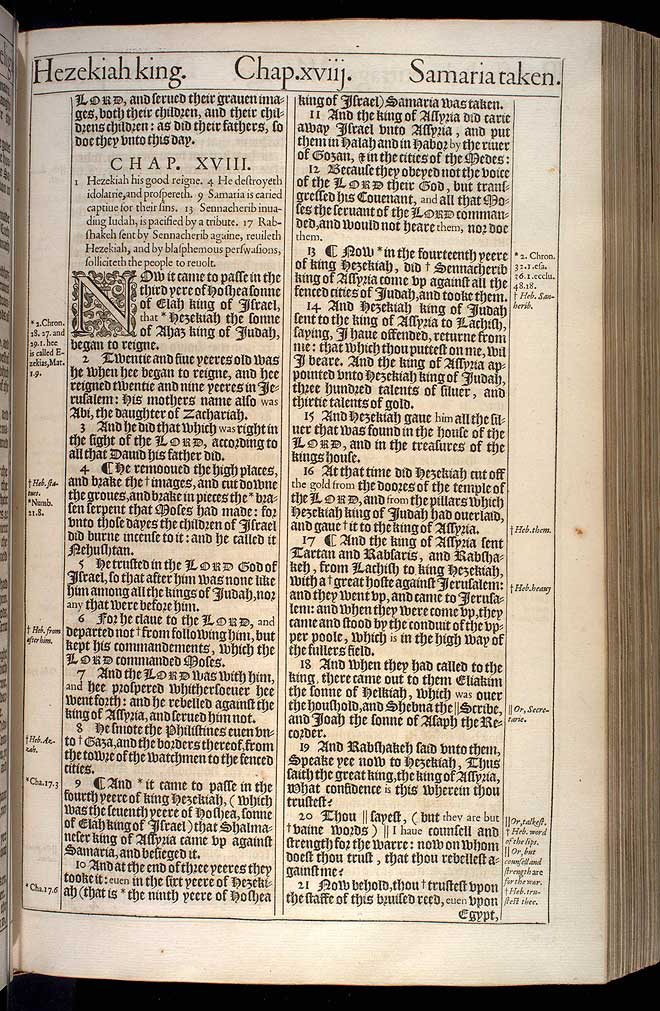 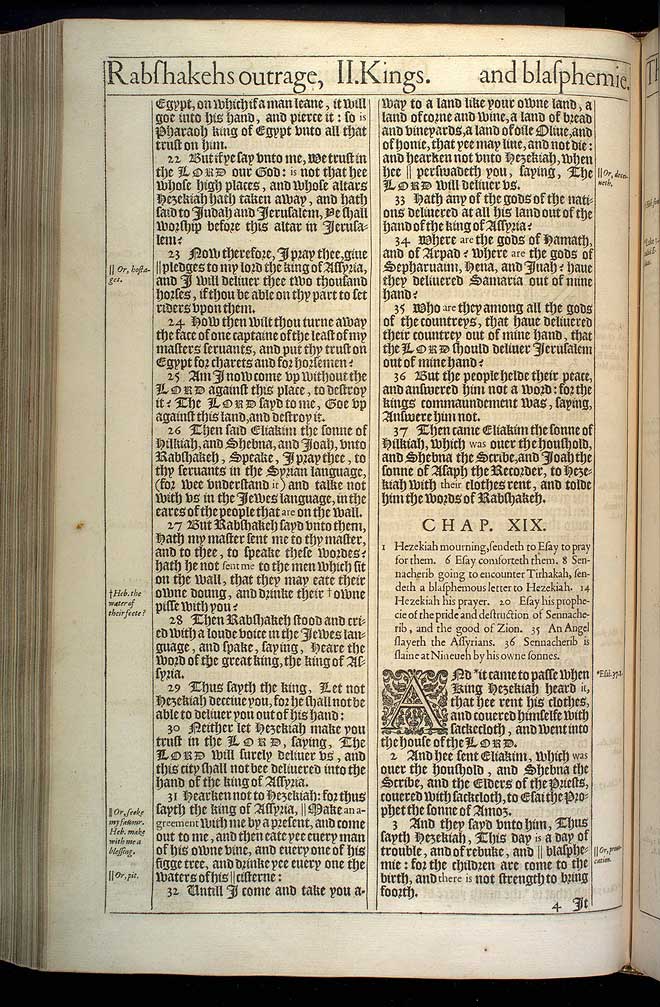 View this 2. Kings chapter 18 scan at a larger size

1 Hezekiah his good reigne. 4 He destroyeth idolatrie, and prospereth. 9 Samaria is caried captiue for their sins. 13 Sennacherib inuading Iudah, is pacified by a tribute. 17 Rabshakeh sent by Sennacherib againe, reuileth Hezekiah, and by blasphemous perswasions, solliciteth the people to reuolt.

1 Now it came to passe in the third yere of Hoshea sonne of Elah king of Israel, that Hezekiah the sonne of Ahaz king of Iudah, began to reigne.1

2 Twentie and fiue yeeres old was he when hee began to reigne, and hee reigned twentie and nine yeeres in Ierusalem: His mothers name also was Abi, the daughter of Zachariah.

3 And he did that which was right in the sight of the Lord, according to all that Dauid his father did.

4 ¶ He remooued the high places, and brake the images, and cut downe the groues, and brake in pieces the brasen serpent that Moses had made: for vnto those dayes the children of Israel did burne incense to it: and he called it Nehushtan.4

5 He trusted in the Lord God of Israel, so that after him was none like him among all the kings of Iudah, nor any that were before him.

6 For he claue to the Lord, and departed not from following him, but kept his commandements, which the Lord commanded Moses.6

7 And the Lord was with him, and hee prospered whithersoeuer hee went forth: and he rebelled against the king of Assyria, and serued him not.

8 He smote the Philistines euen vnto Gaza, and the borders thereof, from the towre of the watchmen to the fenced cities.8

9 ¶ And it came to passe in the fourth yeere of king Hezekiah, (which was the seuenth yeere of Hoshea, sonne of Elah king of Israel) that Shalmaneser king of Assyria came vp against Samaria, and besieged it.9

10 And at the end of three yeeres they tooke it: euen in the sixt yeere of Hezekiah (that is the ninth yeere of Hoshea king of Israel) Samaria was taken.10

11 And the king of Assyria did carie away Israel vnto Assyria, and put them in Halah and in Habor by the riuer of Gozan, & in the cities of the Medes:

12 Because they obeyed not the voice of the Lord their God, but transgressed his Couenant, and all that Moses the seruant of the Lord commanded, and would not heare them, nor doe them.

13 ¶ Now in the fourteenth yeere of king Hezekiah, did Sennacherib king of Assyria come vp against all the fenced cities of Iudah, and tooke them.13

15 And Hezekiah gaue him all the siluer that was found in the house of the Lord, and in the treasures of the kings house.

16 At that time did Hezekiah cut off the gold from the doores of the temple of the Lord, and from the pillars which Hezekiah king of Iudah had ouerlaid, and gaue it to the king of Assyria.16

17 ¶ And the king of Assyria sent Tartan and Rabsaris, and Rabshakeh, from Lachish to king Hezekiah, with a great hoste against Ierusalem: and they went vp, and came to Ierusalem: and when they were come vp, they came and stood by the conduit of the vpper poole, which is in the high way of the fullers field.17

18 And when they had called to the king there came out to them Eliakim the sonne of Helkiah, which was ouer the houshold, and Shebna the Scribe, and Ioah the sonne of Asaph the Recorder.18

19 And Rabshakeh said vnto them, Speake yee now to Hezekiah, Thus saith the great king, the king of Assyria, What confidence is this wherein thou trustest?

20 Thou sayest, (but they are but vaine words) I haue counsell and strength for the warre: now on whom doest thou trust, that thou rebellest against me?20

21 Now behold, thou trustest vpon the staffe of this bruised reed, euen vpon Egypt, on which if a man leane, it will goe into his hand, and pierce it: so is Pharaoh king of Egypt vnto all that trust on him.21

22 But if ye say vnto me, We trust in the Lord our God: is not that hee whose high places, and whose altars Hezekiah hath taken away, and hath said to Iudah and Ierusalem, Ye shall worship before this altar in Ierusalem?

23 Now therefore, I pray thee, giue pledges to my lord the king of Assyria, and I will deliuer thee two thousand horses, if thou be able on thy part to set riders vpon them.23

24 How then wilt thou turne away the face of one captaine of the least of my masters seruants, and put thy trust on Egypt for charets and for horsemen?

26 Then said Eliakim the sonne of Hilkiah, and Shebna, and Ioah, vnto Rabshakeh, Speake, I pray thee, to thy seruants in the Syrian language, (for wee vnderstand it) and talke not with vs in the Iewes language, in the eares of the people that are on the wall.

27 But Rabshakeh sayd vnto them, Hath my master sent me to thy master, and to thee, to speake these wordes? hath he not sent me to the men which sit on the wall, that they may eate their owne doung, and drinke their owne pisse with you?27

28 Then Rabshakeh stood and cried with a loude voice in the Iewes language, and spake, saying, Heare the word of the great king, the king of Assyria.

29 Thus sayth the king, Let not Hezekiah deceiue you, for he shall not be able to deliuer you out of his hand:

30 Neither let Hezekiah make you trust in the Lord, saying, The Lord will surely deliuer vs, and this city shall not bee deliuered into the hand of the king of Assyria.

31 Hearken not to Hezekiah: for thus sayth the king of Assyria, Make an agreement with me by a present, and come out to me, and then eate yee euery man of his owne vine, and euery one of his figge tree, and drinke yee euery one the waters of his cisterne:31

32 Untill I come and take you away to a land like your owne land, a land of corne and wine, a land of bread and vineyards, a land of oile Oliue, and of honie, that yee may liue, and not die: and hearken not vnto Hezekiah, when hee perswadeth you, saying, The Lord will deliuer vs.32

33 Hath any of the gods of the nations deliuered at all his land out of the hand of the king of Assyria?

36 But the people helde their peace, and answered him not a word: for the kings commaundement was, saying, Answere him not.

37 Then came Eliakim the sonne of Hilkiah, which was ouer the houshold, and Shebna the Scribe, and Ioah the sonne of Asaph the Recorder, to Hezekiah with their clothes rent, and tolde him the words of Rabshakeh.