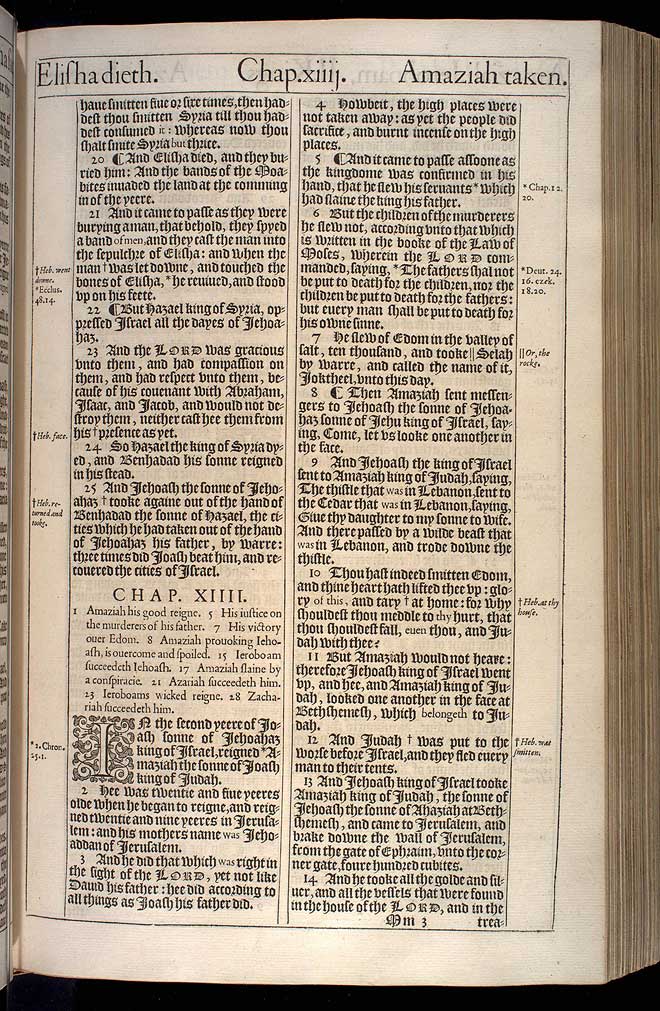 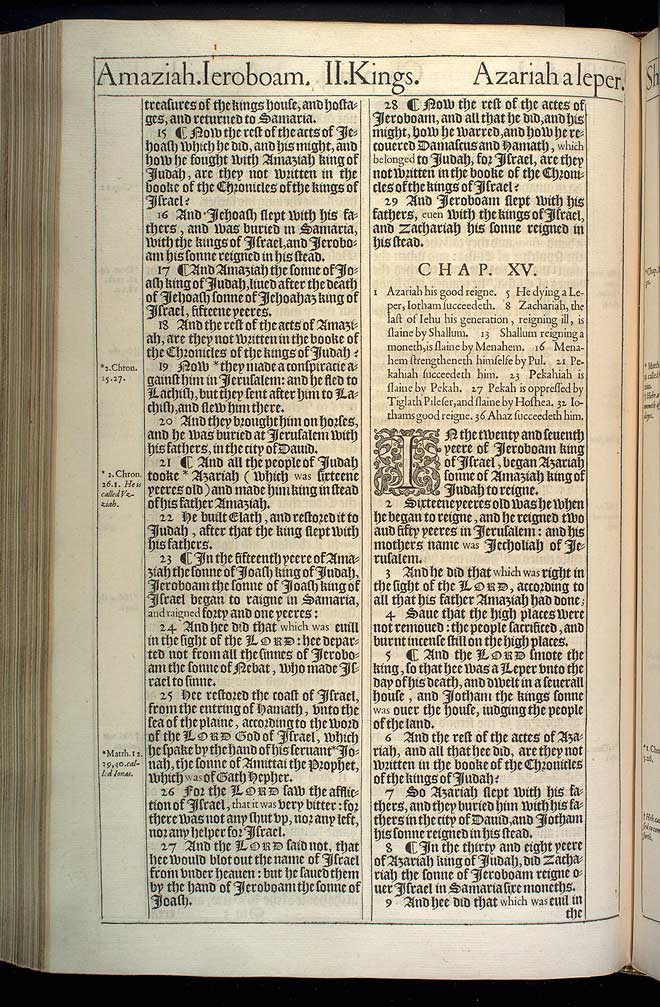 View this 2. Kings chapter 14 scan at a larger size

1 Amaziah his good reigne. 5 His iustice on the murderers of his father. 7 His victory ouer Edom. 8 Amaziah prouoking Iehoash, is ouercome and spoiled. 15 Ieroboam succeedeth Iehoash. 17 Amaziah slaine by a conspiracie. 21 Azariah succeedeth him. 23 Ieroboams wicked reigne. 28 Zachariah succeedeth him.

1 In the second yeere of Ioash sonne of Iehoahaz king of Israel, reigned Amaziah the sonne of Ioash king of Iudah.1

2 Hee was twentie and fiue yeeres olde when he began to reigne, and reigned twentie and nine yeeres in Ierusalem: and his mothers name was Iehoaddan of Ierusalem.

3 And he did that which was right in the sight of the Lord, yet not like Dauid his father: hee did according to all things as Ioash his father did.

5 ¶ And it came to passe assoone as the kingdome was confirmed in his hand, that he slew his seruants which had slaine the king his father.5

7 He slew of Edom in the valley of salt, ten thousand, and tooke Selah by warre, and called the name of it, Ioktheel, vnto this day.7

8 ¶ Then Amaziah sent messengers to Iehoash the sonne of Iehoahaz sonne of Iehu king of Israel, saying, Come, let vs looke one another in the face.

10 Thou hast indeed smitten Edom, and thine heart hath lifted thee vp: glory of this, and tary at home: for why shouldest thou meddle to thy hurt, that thou shouldest fall, euen thou, and Iudah with thee?10

11 But Amaziah would not heare: therefore Iehoash king of Israel went vp, and hee, and Amaziah king of Iudah, looked one another in the face at Bethshemesh, which belongeth to Iudah.

12 And Iudah was put to the worse before Israel, and they fled euery man to their tents.12

13 And Iehoash king of Israel tooke Amaziah king of Iudah, the sonne of Iehoash the sonne of Ahaziah at Bethshemesh, and came to Ierusalem, and brake downe the wall of Ierusalem, from the gate of Ephraim, vnto the corner gate, foure hundred cubites.

14 And he tooke all the golde and siluer, and all the vessels that were found in the house of the Lord, and in the treasures of the kings house, and hostages, and returned to Samaria.

15 ¶ Now the rest of the acts of Iehoash which he did, and his might, and how he fought with Amaziah king of Iudah, are they not written in the booke of the Chronicles of the kings of Israel?

16 And Iehoash slept with his fathers, and was buried in Samaria, with the kings of Israel, and Ieroboam his sonne reigned in his stead.

17 ¶ And Amaziah the sonne of Ioash king of Iudah, liued after the death of Iehoash sonne of Iehoahaz king of Israel, fifteene yeeres.

18 And the rest of the acts of Amaziah, are they not written in the booke of the Chronicles of the kings of Iudah?

19 Now they made a conspiracie against him in Ierusalem: and he fled to Lachish, but they sent after him to Lachish, and slew him there.19

20 And they brought him on horses, and he was buried at Ierusalem with his fathers, in the city of Dauid.

21 ¶ And all the people of Iudah tooke Azariah (which was sixteene yeeres old) and made him king in stead of his father Amaziah.21

22 He built Elath, and restored it to Iudah, after that the king slept with his fathers.

24 And hee did that which was euill in the sight of the Lord: hee departed not from all the sinnes of Ieroboam the sonne of Nebat, who made Israel to sinne.

25 Hee restored the coast of Israel, from the entring of Hamath, vnto the sea of the plaine, according to the word of the Lord God of Israel, which he spake by the hand of his seruant Ionah, the sonne of Amittai the Prophet, which was of Gath Hepher.25

26 For the Lord saw the affliction of Israel, that it was very bitter: for there was not any shut vp, nor any left, nor any helper for Israel.

27 And the Lord said not, that hee would blot out the name of Israel from vnder heauen: but he saued them by the hand of Ieroboam the sonne of Ioash.

28 ¶ Now the rest of the actes of Ieroboam, and all that he did, and his might, how he warred, and how he recouered Damascus and Hamath, which belonged to Iudah, for Israel, are they not written in the booke of the Chronicles of the kings of Israel?

29 And Ieroboam slept with his fathers, euen with the kings of Israel, and Zachariah his sonne reigned in his stead.