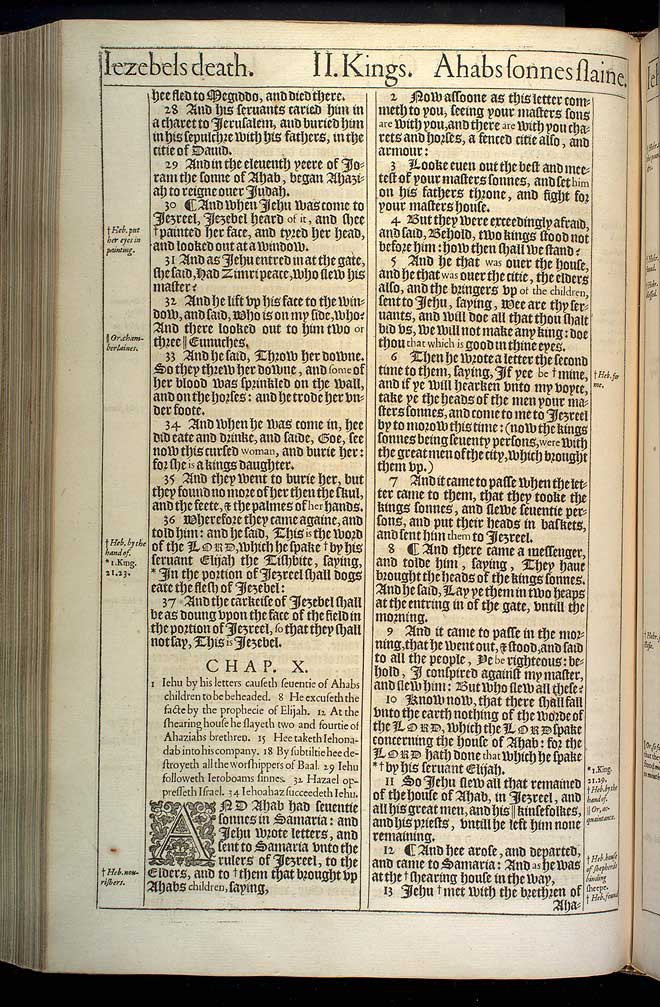 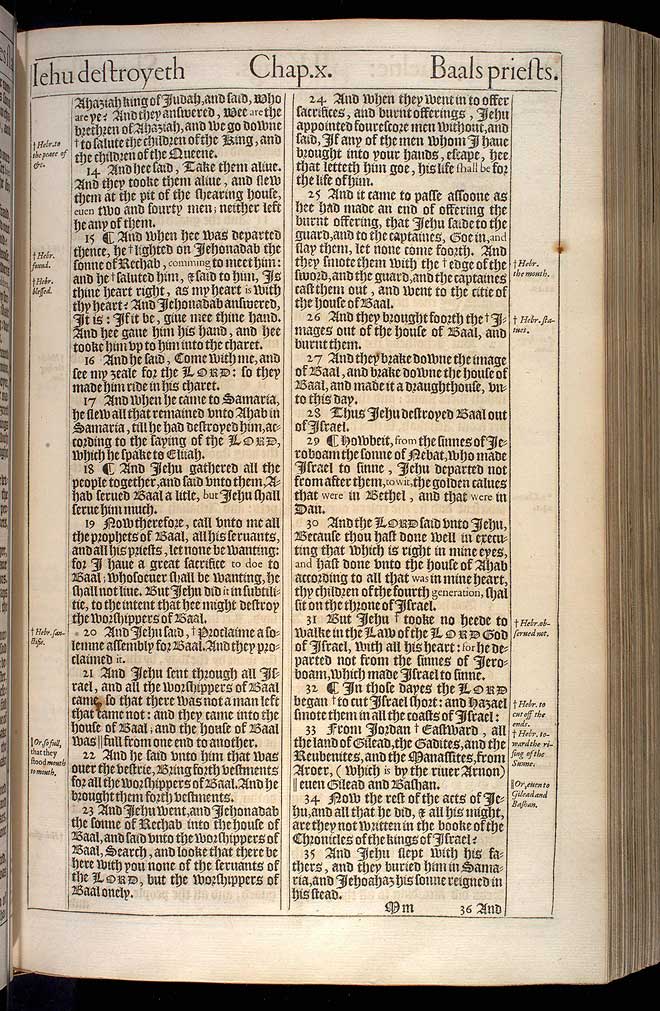 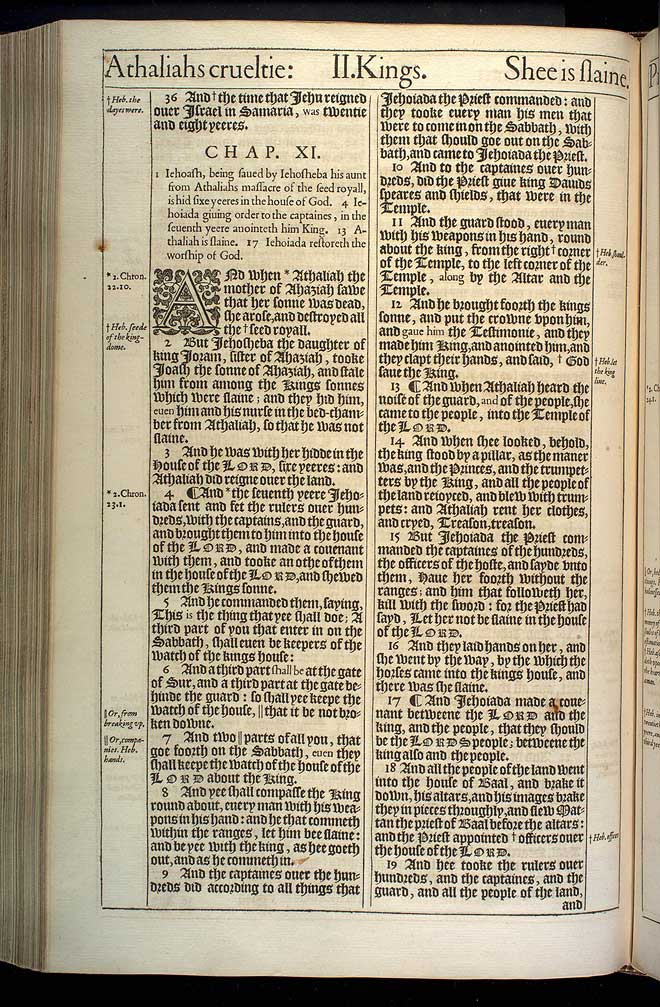 View this 2. Kings chapter 10 scan at a larger size

1 And Ahab had seuentie sonnes in Samaria: and Iehu wrote letters, and sent to Samaria vnto the rulers of Iezreel, to the Elders, and to them that brought vp Ahabs children, saying,1

2 Now assoone as this letter commeth to you, seeing your masters sons are with you, and there are with you charets and horses, a fenced citie also, and armour:

3 Looke euen out the best and meetest of your masters sonnes, and set him on his fathers throne, and fight for your masters house.

4 But they were exceedingly afraid, and said, Behold, two kings stood not before him: how then shall we stand?

6 Then he wrote a letter the second time to them, saying, If yee be mine, and if ye will hearken vnto my voyce, take ye the heads of the men your masters sonnes, and come to me to Iezreel by to morow this time: (now the kings sonnes being seuenty persons, were with the great men of the city, which brought them vp.)6

7 And it came to passe when the letter came to them, that they tooke the kings sonnes, and slewe seuentie persons, and put their heads in baskets, and sent him them to Iezreel.

8 ¶ And there came a messenger, and tolde him, saying, They haue brought the heads of the kings sonnes. And he said, Lay ye them in two heaps at the entring in of the gate, vntill the morning.

9 And it came to passe in the morning, that he went out, & stood, and said to all the people, Ye be righteous: behold, I conspired against my master, and slew him: But who slew all these?

10 Know now, that there shall fall vnto the earth nothing of the worde of the Lord, which the Lord spake concerning the house of Ahab: for the Lord hath done that which he spake by his seruant Elijah.10

11 So Iehu slew all that remained of the house of Ahab, in Iezreel, and all his great men, and his kinsefolkes, and his priests, vntill he left him none remaining.11

12 ¶ And hee arose, and departed, and came to Samaria: And as he was at the shearing house in the way,12

14 And hee said, Take them aliue. And they tooke them aliue, and slew them at the pit of the shearing house, euen two and fourty men; neither left he any of them.

15 ¶ And when hee was departed thence, he lighted on Iehonadab the sonne of Rechab, comming to meet him: and he saluted him, & said to him, Is thine heart right, as my heart is with thy heart? And Iehonadab answered, It is: If it be, giue mee thine hand. And hee gaue him his hand, and hee tooke him vp to him into the charet.15

16 And he said, Come with me, and see my zeale for the Lord: so they made him ride in his charet.

17 And when he came to Samaria, he slew all that remained vnto Ahab in Samaria, till he had destroyed him, according to the saying of the Lord, which he spake to Eliiah.

18 ¶ And Iehu gathered all the people together, and said vnto them, Ahab serued Baal a litle, but Iehu shall serue him much.

19 Now therefore, call vnto me all the prophets of Baal, all his seruants, and all his priests, let none be wanting: for I haue a great sacrifice to doe to Baal; whosoeuer shall be wanting, he shall not liue. But Iehu did it in subtilitie, to the intent that hee might destroy the worshippers of Baal.

20 And Iehu said, Proclaime a solemne assembly for Baal. And they proclaimed it.20

21 And Iehu sent through all Israel, and all the worshippers of Baal came, so that there was not a man left that came not: and they came into the house of Baal; and the house of Baal was full from one end to another.21

24 And when they went in to offer sacrifices, and burnt offerings, Iehu appointed fourescore men without, and said, If any of the men whom I haue brought into your hands, escape, hee that letteth him goe, his life shall be for the life of him.

26 And they brought foorth the Images out of the house of Baal, and burnt them.26

29 ¶ Howbeit, from the sinnes of Ieroboam the sonne of Nebat, who made Israel to sinne, Iehu departed not from after them, to wit, the golden calues that were in Bethel, and that were in Dan.

30 And the Lord said vnto Iehu, Because thou hast done well in executing that which is right in mine eyes, and hast done vnto the house of Ahab according to all that was in mine heart, thy children of the fourth generation, shal sit on the throne of Israel.

31 But Iehu tooke no heede to walke in the Law of the Lord God of Israel, with all his heart: for he departed not from the sinnes of Ieroboam, which made Israel to sinne.31

32 ¶ In those dayes the Lord began to cut Israel short: and Hazael smote them in all the coasts of Israel:32

33 From Iordan Eastward, all the land of Gilead, the Gadites, and the Reubenites, and the Manassites, from Aroer, (which is by the riuer Arnon) euen Gilead and Bashan.33

34 Now the rest of the acts of Iehu, and all that he did, & all his might, are they not written in the booke of the Chronicles of the kings of Israel?

35 And Iehu slept with his fathers, and they buried him in Samaria, and Iehoahaz his sonne reigned in his stead.

36 And the time that Iehu reigned ouer Israel in Samaria, was twentie and eight yeeres.36