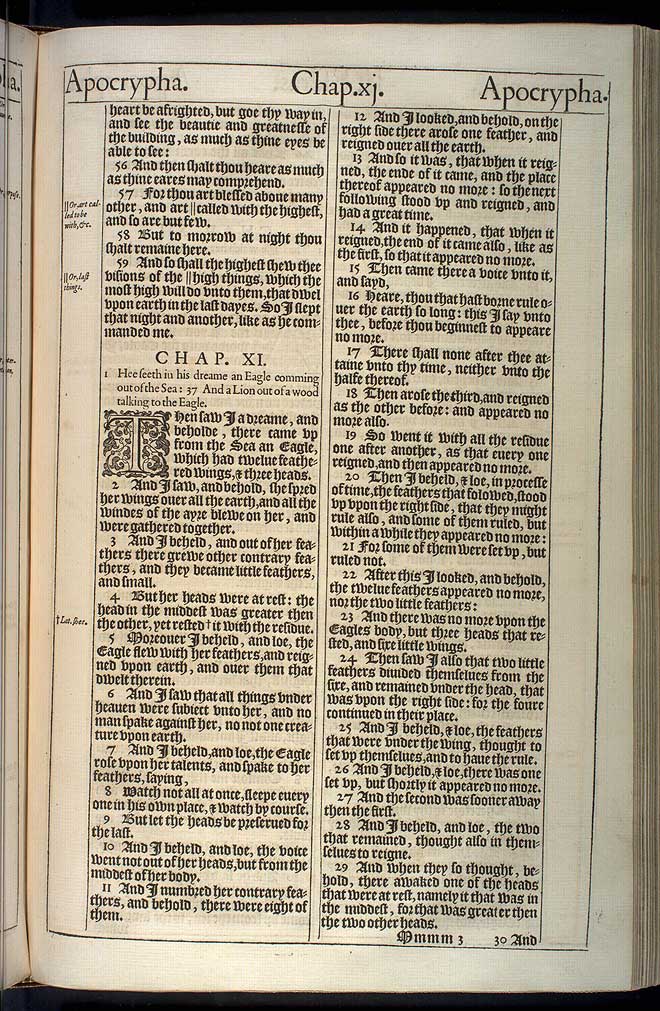 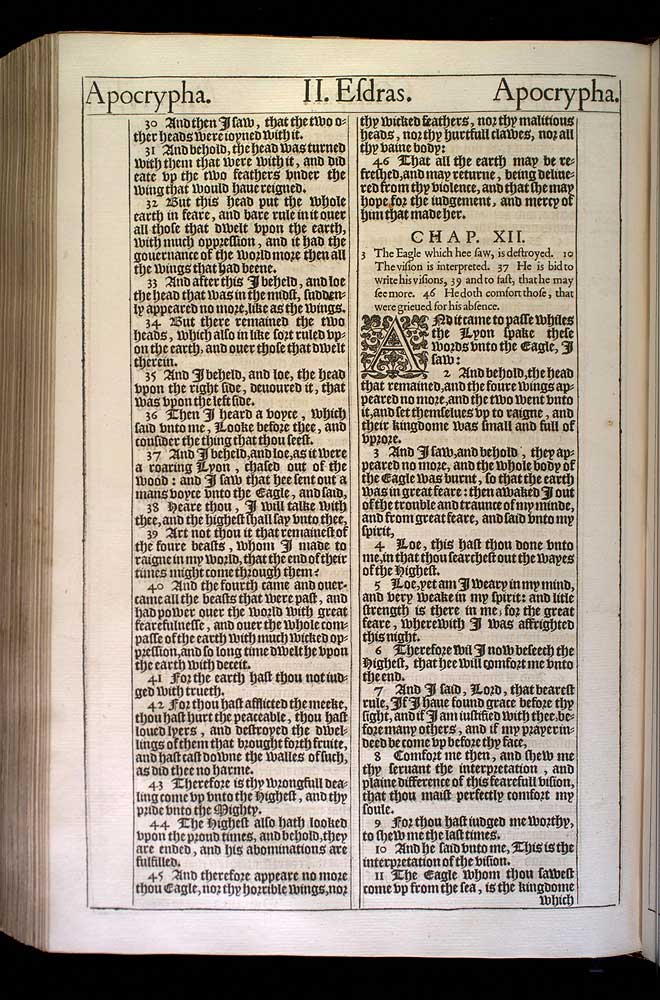 View this 2. Esdras chapter 11 scan at a larger size

1 Hee seeth in his dreame an Eagle comming out of the Sea: 37 And a Lion out of a wood talking to the Eagle.

1 Then saw I a dreame, and beholde, there came vp from the Sea an Eagle, which had twelue feathered wings, & three heads.

2 And I saw, and behold, she spred her wings ouer all the earth, and all the windes of the ayre blewe on her, and were gathered together.

4 But her heads were at rest: the head in the middest was greater then the other, yet rested it with the residue.4

5 Moreouer I beheld, and loe, the Eagle flew with her feathers, and reigned vpon earth, and ouer them that dwelt therein.

6 And I saw that all things vnder heauen were subiect vnto her, and no man spake against her, no not one creature vpon earth.

7 And I beheld, and loe, the Eagle rose vpon her talents, and spake to her feathers, saying,

8 Watch not all at once, sleepe euery one in his own place, & watch by course.

9 But let the heads be preserued for the last.

10 And I beheld, and loe, the voice went not out of her heads, but from the middest of her body.

11 And I numbred her contrary feathers, and behold, there were eight of them.

12 And I looked, and behold, on the right side there arose one feather, and reigned ouer all the earth.

13 And so it was, that when it reigned, the ende of it came, and the place thereof appeared no more: so the next following stood vp and reigned, and had a great time.

14 And it happened, that when it reigned, the end of it came also, like as the first, so that it appeared no more.

15 Then came there a voice vnto it, and sayd,

16 Heare, thou that hast borne rule ouer the earth so long: this I say vnto thee, before thou beginnest to appeare no more.

17 There shall none after thee attaine vnto thy time, neither vnto the halfe thereof.

18 Then arose the third, and reigned as the other before: and appeared no more also.

19 So went it with all the residue one after another, as that euery one reigned, and then appeared no more.

20 Then I beheld, & loe, in processe of time, the feathers that folowed, stood vp vpon the right side, that they might rule also, and some of them ruled, but within a while they appeared no more:

21 For some of them were set vp, but ruled not.

22 After this I looked, and behold, the twelue feathers appeared no more, nor the two little feathers:

23 And there was no more vpon the Eagles body, but three heads that rested, and sixe little wings.

24 Then saw I also that two little feathers diuided themselues from the sixe, and remained vnder the head, that was vpon the right side: for the foure continued in their place.

25 And I beheld, & loe, the feathers that were vnder the wing, thought to set vp themselues, and to haue the rule.

26 And I beheld, & loe, there was one set vp, but shortly it appeared no more.

27 And the second was sooner away then the first.

28 And I beheld, and loe, the two that remained, thought also in themselues to reigne.

29 And when they so thought, behold, there awaked one of the heads that were at rest, namely it that was in the middest, for that was greater then the two other heads.

30 And then I saw, that the two other heads were ioyned with it.

31 And behold, the head was turned with them that were with it, and did eate vp the two feathers vnder the wing that would haue reigned.

32 But this head put the whole earth in feare, and bare rule in it ouer all those that dwelt vpon the earth, with much oppression, and it had the gouernance of the world more then all the wings that had beene.

33 And after this I beheld, and loe the head that was in the midst, suddenly appeared no more, like as the wings.

34 But there remained the two heads, which also in like sort ruled vpon the earth, and ouer those that dwelt therein.

35 And I beheld, and loe, the head vpon the right side, deuoured it, that was vpon the left side.

36 Then I heard a voyce, which said vnto me, Looke before thee, and consider the thing that thou seest.

37 And I beheld, and loe, as it were a roaring Lyon, chased out of the wood: and I saw that hee sent out a mans voyce vnto the Eagle, and said,

38 Heare thou, I will talke with thee, and the highest shall say vnto thee,

39 Art not thou it that remainest of the foure beasts, whom I made to raigne in my world, that the end of their times might come through them?

40 And the fourth came and ouercame all the beasts that were past, and had power ouer the world with great fearefulnesse, and ouer the whole compasse of the earth with much wicked oppression, and so long time dwelt he vpon the earth with deceit.

41 For the earth hast thou not iudged with trueth.

42 For thou hast afflicted the meeke, thou hast hurt the peaceable, thou hast loued lyers, and destroyed the dwellings of them that brought forth fruite, and hast cast downe the walles of such, as did thee no harme.

43 Therefore is thy wrongfull dealing come vp vnto the Highest, and thy pride vnto the Mighty.

44 The Highest also hath looked vpon the proud times, and behold, they are ended, and his abominations are fulfilled.

45 And therefore appeare no more thou Eagle, nor thy horrible wings, nor thy wicked feathers, nor thy malitious heads, nor thy hurtfull clawes, nor all thy vaine body:

46 That all the earth may be refreshed, and may returne, being deliuered from thy violence, and that she may hope for the iudgement, and mercy of him that made her.