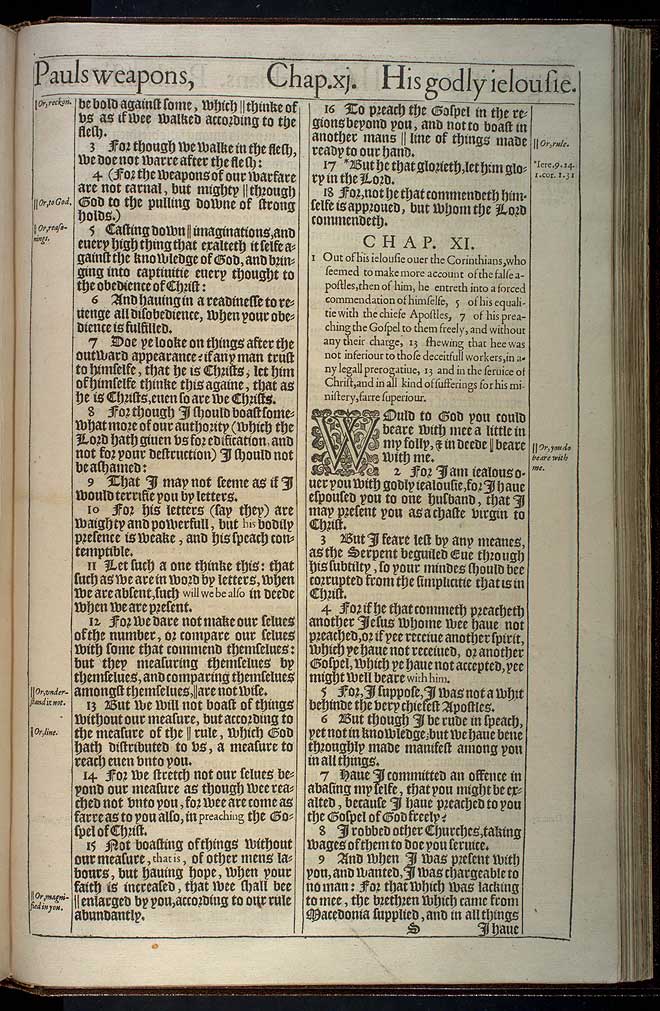 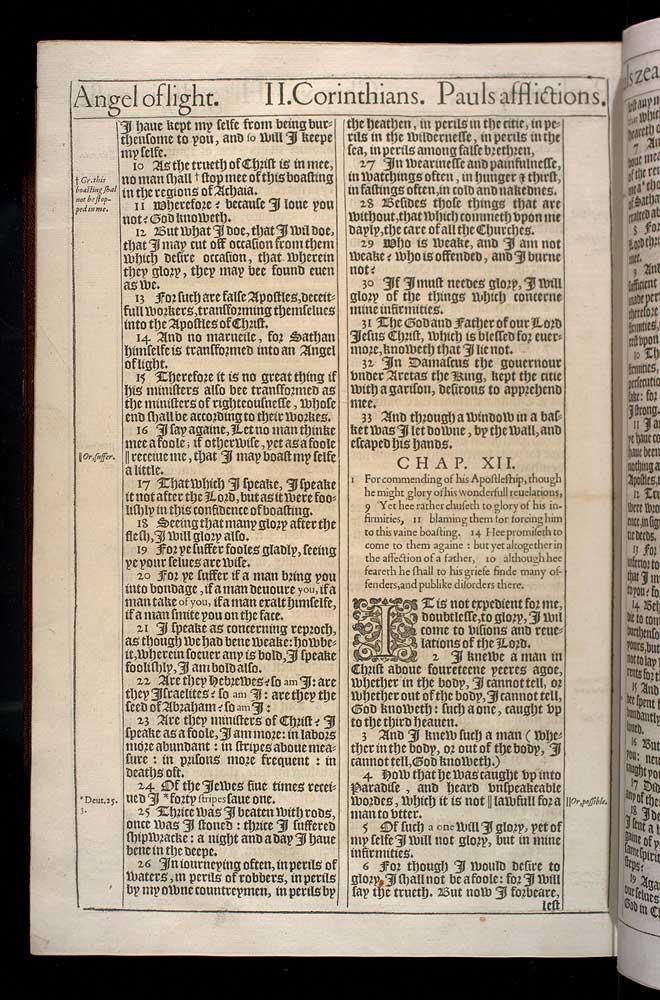 View this 2. Corinthians chapter 11 scan at a larger size

1 Out of his ielousie ouer the Corinthians, who seemed to make more account of the false apostles, then of him, he entreth into a forced commendation of himselfe, 5 of his equalitie with the chiefe Apostles, 7 of his preaching the Gospel to them freely, and without any their charge, 13 shewing that hee was not inferiour to those deceitfull workers, in any legall prerogatiue, 13 and in the seruice of Christ, and in all kind of sufferings for his ministery, farre superiour.

2 For I am iealous ouer you with godly iealousie, for I haue espoused you to one husband, that I may present you as a chaste virgin to Christ.

3 But I feare lest by any meanes, as the Serpent beguiled Eue through his subtilty, so your mindes should bee corrupted from the simplicitie that is in Christ.

5 For, I suppose, I was not a whit behinde the very chiefest Apostles.

6 But though I be rude in speach, yet not in knowledge; but we haue bene throughly made manifest among you in all things.

7 Haue I committed an offence in abasing my selfe, that you might be exalted, because I haue preached to you the Gospel of God freely?

8 I robbed other Churches, taking wages of them to doe you seruice.

9 And when I was present with you, and wanted, I was chargeable to no man: For that which was lacking to mee, the brethren which came from Macedonia supplied, and in all things I haue kept my selfe from being burthensome to you, and so will I keepe my selfe.

10 As the trueth of Christ is in mee, no man shall stop mee of this boasting in the regions of Achaia.10

11 Wherefore? because I loue you not? God knoweth.

12 But what I doe, that I wil doe, that I may cut off occasion from them which desire occasion, that wherein they glory, they may bee found euen as we.

13 For such are false Apostles, deceitfull workers, transforming themselues into the Apostles of Christ.

14 And no marueile, for Sathan himselfe is transformed into an Angel of light.

15 Therefore it is no great thing if his ministers also bee transformed as the ministers of righteousnesse, whose end shall be according to their workes.

16 I say againe, Let no man thinke mee a foole; if otherwise, yet as a foole receiue me, that I may boast my selfe a little.16

17 That which I speake, I speake it not after the Lord, but as it were foolishly in this confidence of boasting.

18 Seeing that many glory after the flesh, I will glory also.

21 I speake as concerning reproch, as though we had bene weake: howbeit, wherein soeuer any is bold, I speake foolishly, I am bold also.

23 Are they ministers of Christ? I speake as a foole, I am more: in labors more abundant: in stripes aboue measure: in prisons more frequent: in deaths oft.

24 Of the Iewes fiue times receiued I forty stripes saue one.24

25 Thrice was I beaten with rods, once was I stoned: thrice I suffered shipwracke: a night and a day I haue bene in the deepe.

28 Besides those things that are without, that which commeth vpon me dayly, the care of all the Churches.

29 Who is weake, and I am not weake? who is offended, and I burne not?

30 If I must needes glory, I will glory of the things which concerne mine infirmities.

31 The God and Father of our Lord Iesus Christ, which is blessed for euermore, knoweth that I lie not.

32 In Damascus the gouernour vnder Aretas the King, kept the citie with a garison, desirous to apprehend mee.

33 And through a window in a basket was I let downe, by the wall, and escaped his hands.