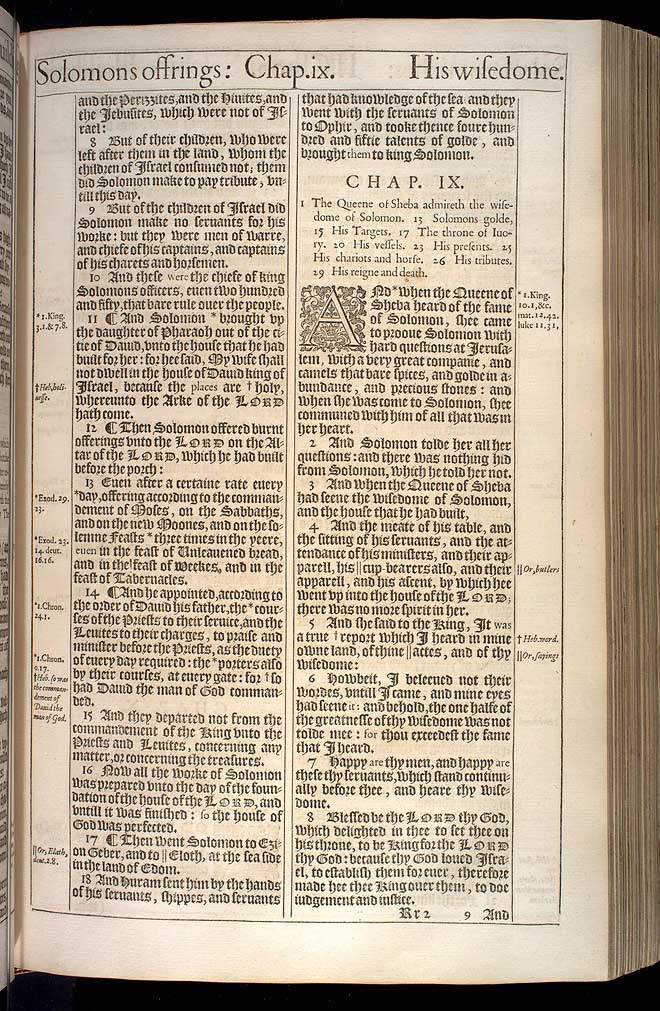 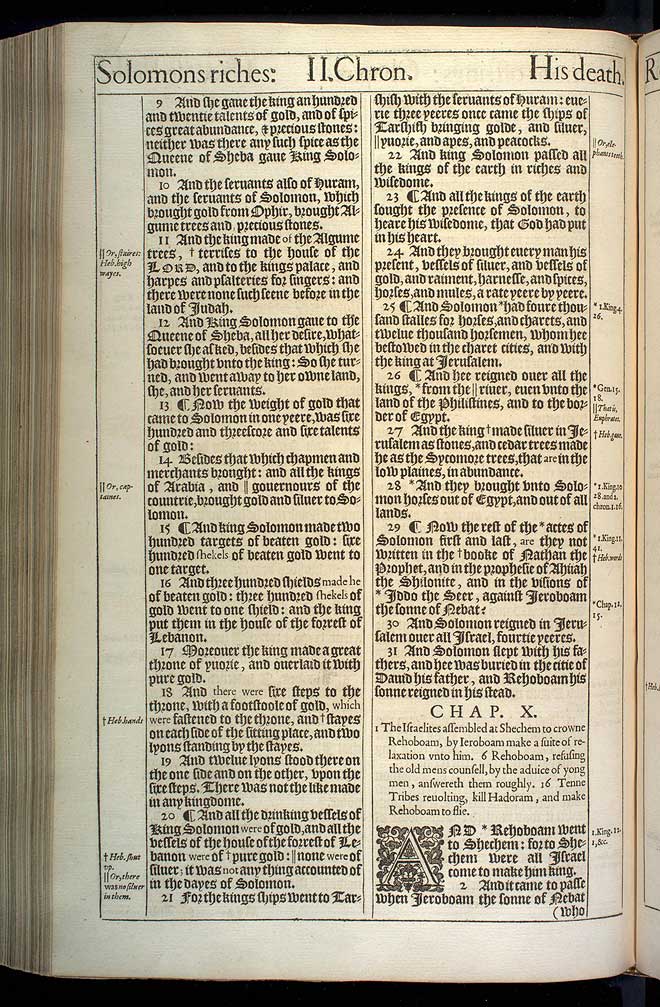 View this 2. Chronicles chapter 9 scan at a larger size

1 And when the Queene of Sheba heard of the fame of Solomon, shee came to prooue Solomon with hard questions at Ierusalem, with a very great companie, and camels that bare spices, and golde in abundance, and precious stones: and when she was come to Solomon, shee communed with him of all that was in her heart.1

2 And Solomon tolde her all her questions: and there was nothing hid from Solomon, which he told her not.

3 And when the Queene of Sheba had seene the wisedome of Solomon, and the house that he had built,

5 And she said to the King, It was a true report which I heard in mine owne land, of thine actes, and of thy wisedome:5

6 Howbeit, I beleeued not their wordes, vntill I came, and mine eyes had seene it: and behold, the one halfe of the greatnesse of thy wisedome was not tolde mee: for thou exceedest the fame that I heard.

7 Happy are thy men, and happy are these thy seruants, which stand continually before thee, and heare thy wisedome.

8 Blessed be the Lord thy God, which delighted in thee to set thee on his throne, to be King for the Lord thy God: because thy God loued Israel, to establish them for euer, therefore made hee thee King ouer them, to doe iudgement and iustice.

9 And she gaue the king an hundred and twentie talents of gold, and of spices great abundance, & precious stones: neither was there any such spice as the Queene of Sheba gaue King Solomon.

11 And the king made of the Algume trees, terrises to the house of the Lord, and to the kings palace, and harpes and psalteries for singers: and there were none such seene before in the laud of Iudah.11

12 And King Solomon gaue to the Queene of Sheba, all her desire, whatsoeuer she asked, besides that which she had brought vnto the king: So she turned, and went away to her owne land, she, and her seruants.

13 ¶ Now the weight of gold that came to Solomon in one yeere, was sixe hundred and threescore and sixe talents of gold:

14 Besides that which chapmen and merchants brought: and all the kings of Arabia, and gouernours of the countrie, brought gold and siluer to Solomon.14

17 Moreouer the king made a great throne of yuorie, and ouerlaid it with pure gold.

18 And there were sixe steps to the throne, with a footstoole of gold, which were fastened to the throne, and stayes on each side of the sitting place, and two lyons standing by the stayes.18

19 And twelue lyons stood there on the one side and on the other, vpon the sixe steps. There was not the like made in any kingdome.

20 ¶ And all the drinking vessels of King Solomon were of gold, and all the vessels of the house of the forrest of Lebanon were of pure gold: none were of siluer; it was not any thing accounted of in the dayes of Solomon.20

21 For the kings ships went to Tarshish with the seruants of Huram: euerie three yeeres once came the ships of Tarshish bringing golde, and siluer, yuorie, and apes, and peacocks.21

22 And king Solomon passed all the kings of the earth in riches and wisedome.

23 ¶ And all the kings of the earth sought the presence of Solomon, to heare his wisedome, that God had put in his heart.

24 And they brought euery man his present, vessels of siluer, and vessels of gold, and raiment, harnesse, and spices, horses, and mules, a rate yeere by yeere.

25 ¶ And Solomon had foure thousand stalles for horses, and charets, and twelue thousand horsemen, whom hee bestowed in the charet cities, and with the king at Ierusalem.25

26 ¶ And hee reigned ouer all the kings, from the riuer, euen vnto the land of the Philistines, and to the border of Egypt.26

27 And the king made siluer in Ierusalem as stones, and cedar trees made he as the Sycomore trees, that are in the low plaines, in abundance.27

28 And they brought vnto Solomon horses out of Egypt, and out of all lands.28

29 ¶ Now the rest of the actes of Solomon first and last, are they not written in the booke of Nathan the Prophet, and in the prophesie of Ahiiah the Shilonite, and in the visions of Iddo the Seer, against Ieroboam the sonne of Nebat?29

30 And Solomon reigned in Ierusalem ouer all Israel, fourtie yeeres.

31 And Solomon slept with his fathers, and hee was buried in the citie of Dauid his father, and Rehoboam his sonne reigned in his stead.