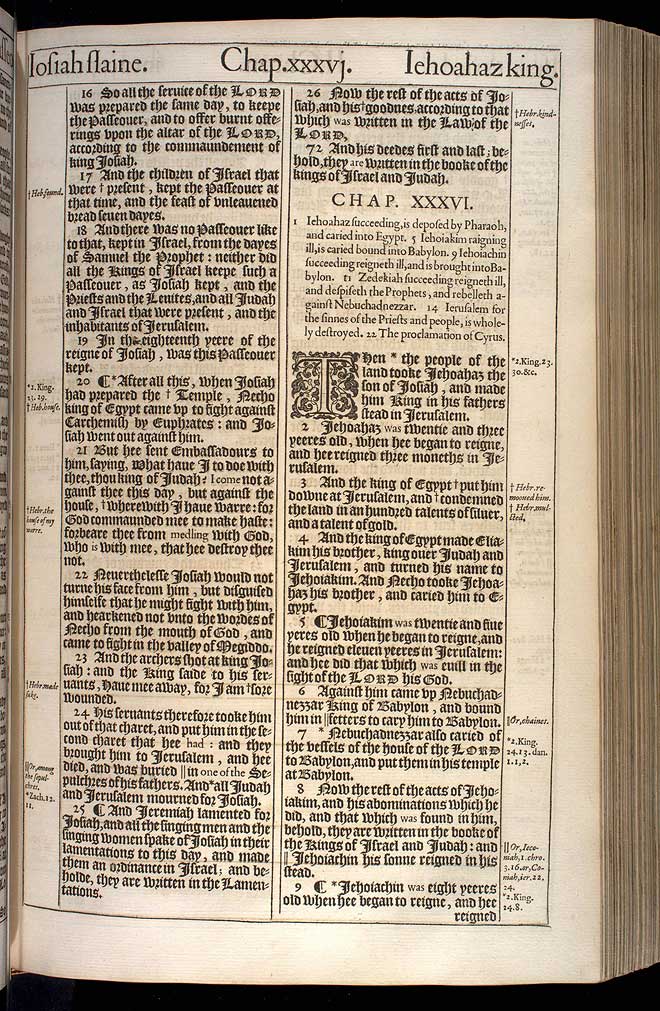 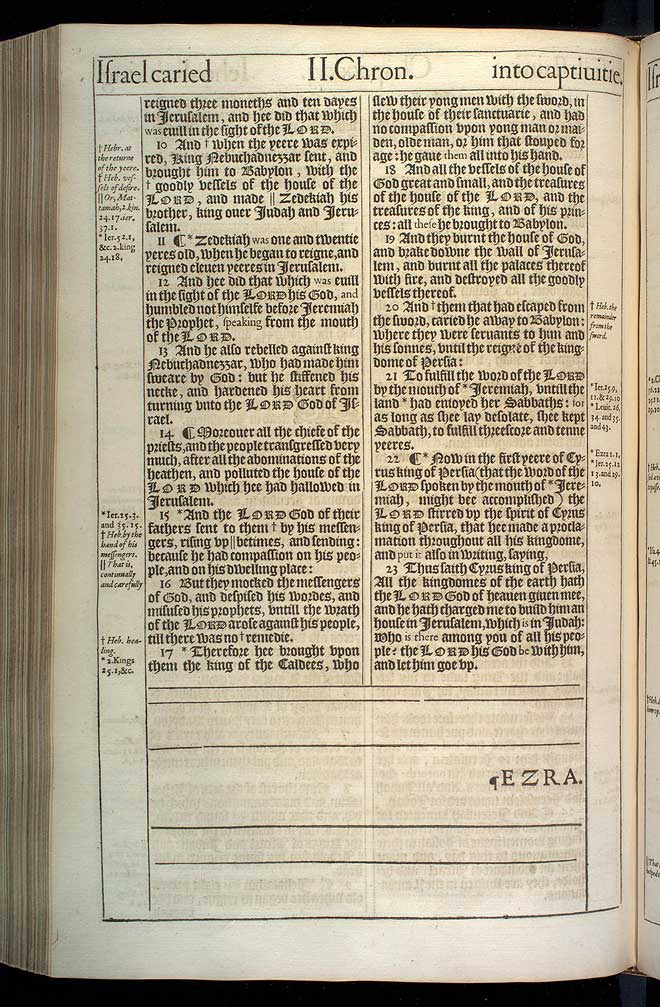 View this 2. Chronicles chapter 36 scan at a larger size

1 Then the people of the land tooke Iehoahaz the son of Iosiah, and made him King in his fathers stead in Ierusalem.1

2 Iehoahaz was twentie and three yeeres old, when hee began to reigne, and hee reigned three moneths in Ierusalem.

3 And the king of Egypt put him downe at Ierusalem, and condemned the land in an hundred talents of siluer, and a talent of gold.3

4 And the king of Egypt made Eliakim his brother, king ouer Iudah and Ierusalem, and turned his name to Iehoiakim. And Necho tooke Iehoahaz his brother, and caried him to Egypt.

5 ¶ Iehoiakim was twentie and fiue yeres old when he began to reigne, and he reigned eleuen yeeres in Ierusalem: and hee did that which was euill in the sight of the Lord his God.

6 Against him came vp Nebuchadnezzar King of Babylon, and bound him in fetters to cary him to Babylon.6

7 Nebuchadnezzar also caried of the vessels of the house of the Lord to Babylon, and put them in his temple at Babylon.7

8 Now the rest of the acts of Iehoiakim, and his abominations which he did, and that which was found in him, behold, they are written in the booke of the Kings of Israel and Iudah: and Iehoiachin his sonne reigned in his stead.8

9 ¶ Iehoiachin was eight yeeres old when hee began to reigne, and hee reigned three moneths and ten dayes in Ierusalem, and hee did that which was euill in the sight of the Lord.9

10 And when the yeere was expired, King Nebuchadnezzar sent, and brought him to Babylon, with the goodly vessels of the house of the Lord, and made Zedekiah his brother, king ouer Iudah and Ierusalem.10

11 ¶ Zedekiah was one and twentie yeres old, when he began to reigne, and reigned eleuen yeeres in Ierusalem.11

12 And hee did that which was euill in the sight of the Lord his God, and humbled not himselfe before Ieremiah the Prophet, speaking from the mouth of the Lord.

13 And he also rebelled against king Nebuchadnezzar, who had made him sweare by God: but he stiffened his necke, and hardened his heart from turning vnto the Lord God of Israel.

14 ¶ Moreouer all the chiefe of the priests, and the people transgressed very much, after all the abominations of the heathen, and polluted the house of the Lord which hee had hallowed in Ierusalem.

15 And the Lord God of their fathers sent to them by his messengers, rising vp betimes, and sending: because he had compassion on his people, and on his dwelling place:15

16 But they mocked the messengers of God, and despised his wordes, and misused his prophets, vntill the wrath of the Lord arose against his people, till there was no remedie.16

17 Therefore hee brought vpon them the king of the Caldees, who slew their yong men with the sword, in the house of their sanctuarie, and had no compassion vpon yong man or maiden, olde man, or him that stouped for age: he gaue them all into his hand.17

19 And they burnt the house of God, and brake downe the wall of Ierusalem, and burnt all the palaces thereof with fire, and destroyed all the goodly vessels thereof.

20 And them that had escaped from the sword, caried he away to Babylon: where they were seruants to him and his sonnes, vntil the reigne of the kingdome of Persia:20

21 To fulfill the word of the Lord by the mouth of Ieremiah, vntill the land had enioyed her Sabbaths: for as long as shee lay desolate, shee kept Sabbath, to fulfill threescore and tenne yeeres.21

23 Thus saith Cyrus king of Persia, All the kingdomes of the earth hath the Lord God of heauen giuen mee, and he hath charged me to build him an house in Ierusalem, which is in Iudah: Who is there among you of all his people? the Lord his God be with him, and let him goe vp.