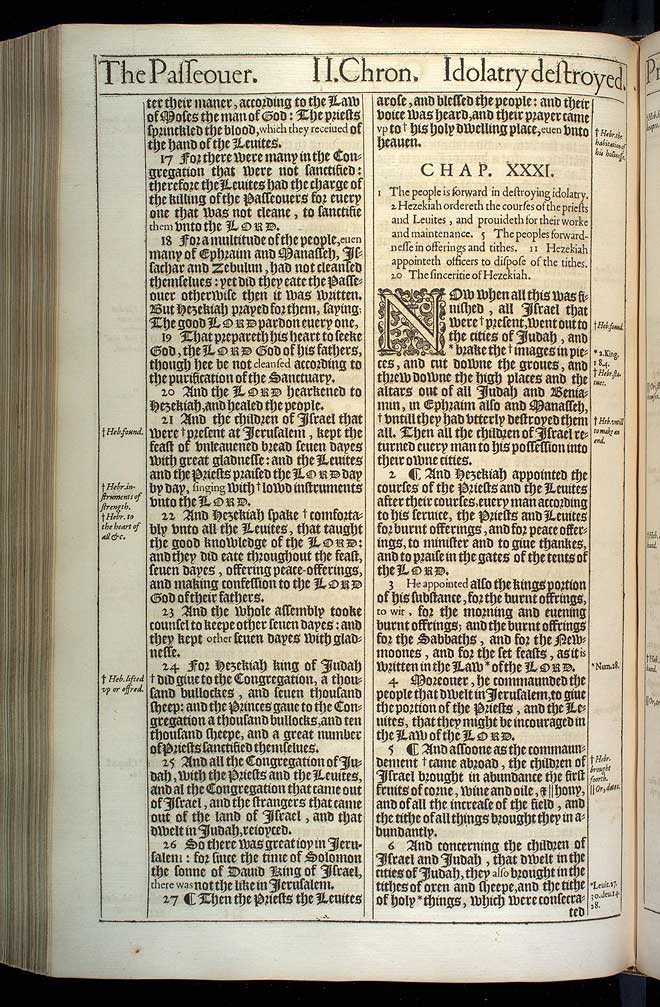 View this 2. Chronicles chapter 31 scan at a larger size

1 The people is forward in destroying idolatry. 2 Hezekiah ordereth the courses of the priests and Leuites, and prouideth for their worke and maintenance. 5 The peoples forwardnesse in offerings and tithes. 11 Hezekiah appointeth officers to dispose of the tithes. 20 The sinceritie of Hezekiah.

1 Now when all this was finished, all Israel that were present, went out to the cities of Iudah, and brake the images in pieces, and cut downe the groues, and threw downe the high places and the altars out of all Iudah and Beniamin, in Ephraim also and Manasseh, vntill they had vtterly destroyed them all. Then all the children of Israel returned euery man to his possession into their owne cities.1

2 ¶ And Hezekiah appointed the courses of the Priests and the Leuites after their courses, euery man according to his seruice, the Priests and Leuites for burnt offerings, and for peace offerings, to minister and to giue thankes, and to praise in the gates of the tents of the Lord.

4 Moreouer, he commaunded the people that dwelt in Ierusalem, to giue the portion of the Priests, and the Leuites, that they might be incouraged in the Law of the Lord.

5 ¶ And assoone as the commaundement came abroad, the children of Israel brought in abundance the first fruits of corne, wine and oile, & hony, and of all the increase of the field, and the tithe of all things brought they in abundantly.5

6 And concerning the children of Israel and Iudah, that dwelt in the cities of Iudah, they also brought in the tithes of oxen and sheepe, and the tithe of holy things, which were consecrated vnto the Lord their God, and layd them by heapes.6

7 In the third moneth they began to lay the foundation of the heapes, and finished them in the seuenth moneth.

8 And when Hezekiah and the princes came, and saw the heapes, they blessed the Lord, and his people Israel.

9 Then Hezekiah questioned with the priests and the Leuites concerning the heapes.

10 And Azariah the chiefe priest of the house of Zadok, answered him & said: Since the people began to bring the offerings into the house of the Lord, wee haue had enough to eate, and haue left plentie: for the Lord hath blessed his people; and that which is left, is this great store.

11 ¶ Then Hezekiah commanded to prepare chambers in the house of the Lord, and they prepared them,11

12 And brought in the offerings and the tithes, and the dedicate things, faithfully: ouer which Cononiah the Leuite was ruler, and Shimei his brother was the next.

13 And Iehiel, and Azaziah, and Nahath, and Asahel, and Ierimoth, and Iozabad, and Eliel, and Ismachiah, and Mahath, and Benaiah were ouerseers vnder the hande of Cononiah, and Shimei his brother, at the commandement of Hezekiah the king, and Azariah the ruler of the house of God.13

14 And Kore the sonne of Immah the Leuite the porter toward the East, was ouer the free will offerings of God, to distribute the oblations of the Lord, and the most holy things.

15 And next him were Eden, and Miniamin, and Ieshua, and Shemaiah, Amariah, and Shechaniah, in the cities of the priests, in their set office, to giue to their brethren by courses, as wel to the great as to the small:15

16 Beside their genealogie of males, from three yeeres old and vpward, euen vnto euery one that entreth into the house of the Lord, his dayly portion for their seruice in their charges, according to their courses:

17 Both to the genealogie of the priests by the house of their fathers, and the Leuites from twenty yeeres olde and vpward, in their charges by their courses:

18 And to the genealogie of all their litle ones, their wiues, and their sonnes, and their daughters, through all the congregation: for in their set office they sanctified themselues in holinesse.18

19 Also of the sonnes of Aaron the priests, which were in the fields of the suburbs of their cities, in euery seuerall citie, the men that were expressed by name, to giue portions to all the males among the priests, and to all that were reckoned by genealogies, among the Leuites.

20 ¶ And thus did Hezekiah throughout al Iudah, and wrought that which was good and right, and trueth before the Lord his God.

21 And in euery worke that he began in the seruice of the house of God, and in the law, and in the commandements to seeke his God, he did it with all his heart, and prospered.