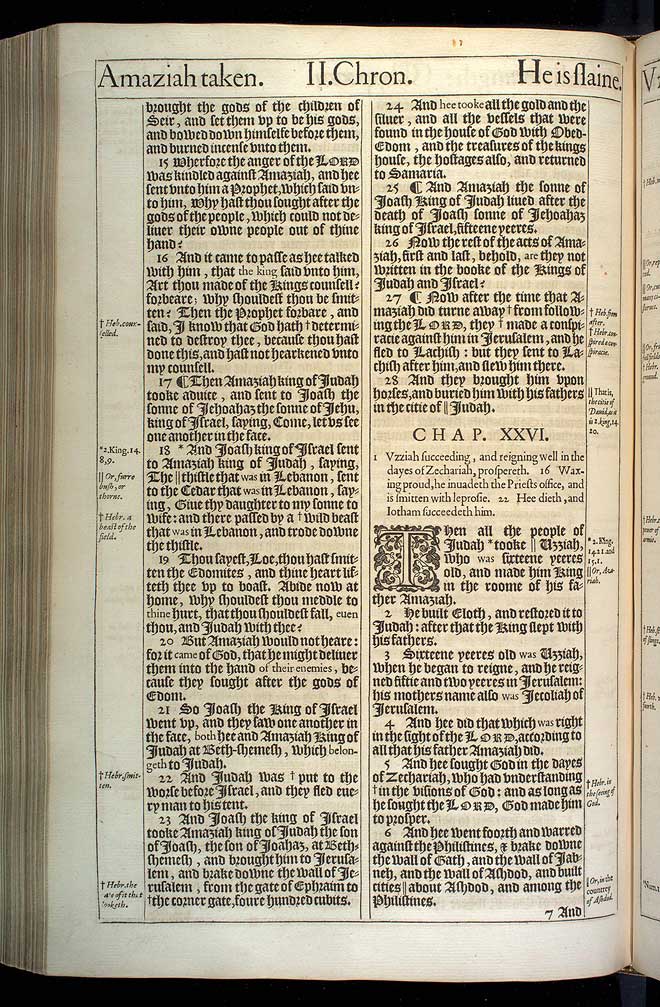 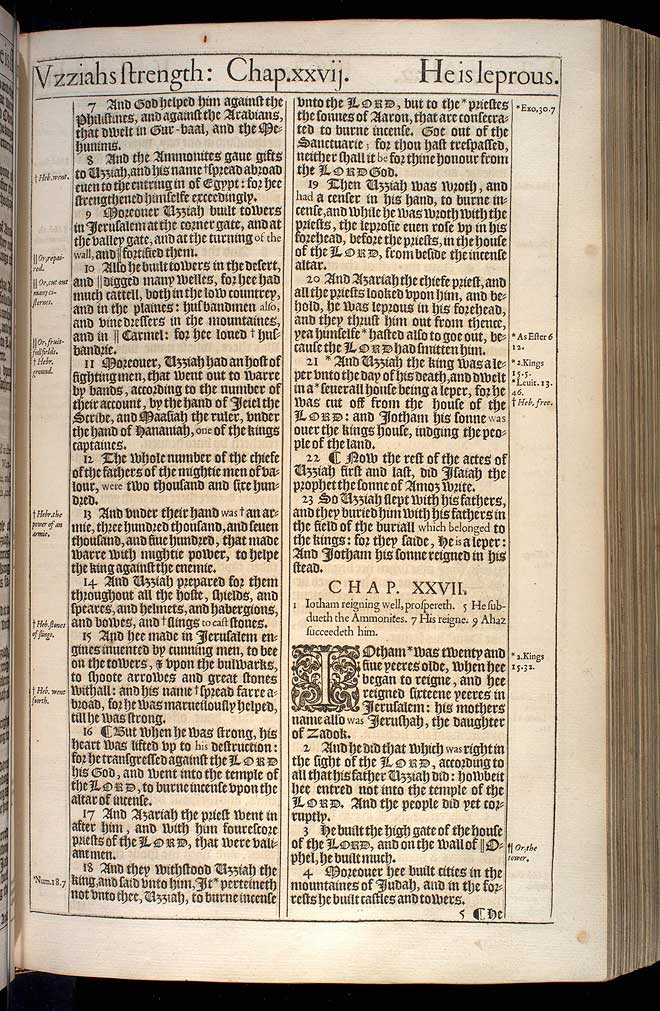 View this 2. Chronicles chapter 26 scan at a larger size

1 Vzziah succeeding, and reigning well in the dayes of Zechariah, prospereth. 16 Waxing proud, he inuadeth the Priests office, and is smitten with leprosie. 22 Hee dieth, and Iotham succeedeth him.

1 Then all the people of Iudah tooke Uzziah, who was sixteene yeeres old, and made him King in the roome of his father Amaziah.1

2 He built Eloth, and restored it to Iudah: after that the King slept with his fathers.

3 Sixteene yeeres old was Uzziah, when he began to reigne, and he reigned fiftie and two yeeres in Ierusalem: his mothers name also was Iecoliah of Ierusalem.

4 And hee did that which was right in the sight of the Lord, according to all that his father Amaziah did.

5 And hee sought God in the dayes of Zechariah, who had vnderstanding in the visions of God: and as long as he sought the Lord, God made him to prosper.5

7 And God helped him against the Philistines, and against the Arabians, that dwelt in Gur-baal, and the Mehunims.

8 And the Ammonites gaue gifts to Uzziah, and his name spread abroad euen to the entring in of Egypt: for hee strengthened himselfe exceedingly.8

10 Also he built towers in the desert, and digged many welles, for hee had much cattell, both in the low countrey, and in the plaines: husbandmen also, and vine dressers in the mountaines, and in Carmel: for hee loued husbandrie.10

11 Moreouer, Uzziah had an host of fighting men, that went out to warre by bands, according to the number of their account, by the hand of Ieiel the Scribe, and Maasiah the ruler, vnder the hand of Hananiah, one of the kings captaines.

12 The whole number of the chiefe of the fathers of the mightie men of valour, were two thousand and sixe hundred.

13 And vnder their hand was an armie, three hundred thousand, and seuen thousand, and fiue hundred, that made warre with mightie power, to helpe the king against the enemie.13

14 And Uzziah prepared for them throughout all the hoste, shields, and speares, and helmets, and habergions, and bowes, and slings to cast stones.14

15 And hee made in Ierusalem engines inuented by cunning men, to bee on the towers, & vpon the bulwarks, to shoote arrowes and great stones withall: and his name spread farre abroad, for he was marueilously helped, till he was strong.15

16 ¶ But when he was strong, his heart was lifted vp to his destruction: for he transgressed against the Lord his God, and went into the temple of the Lord, to burne incense vpon the altar of incense.

17 And Azariah the priest went in after him, and with him fourescore priests of the Lord, that were valiant men.

18 And they withstood Uzziah the king, and said vnto him, It perteineth not vnto thee, Uzziah, to burne incense vnto the Lord, but to the priestes the sonnes of Aaron, that are consecrated to burne incense. Goe out of the Sanctuarie; for thou hast trespassed, neither shall it be for thine honour from the Lord God.18

19 Then Uzziah was wroth, and had a censer in his hand, to burne incense, and while he was wroth with the priests, the leprosie euen rose vp in his forehead, before the priests, in the house of the Lord, from beside the incense altar.

20 And Azariah the chiefe priest, and all the priests looked vpon him, and behold, he was leprous in his forehead, and they thrust him out from thence, yea himselfe hasted also to goe out, because the Lord had smitten him.20

21 And Uzziah the king was a leper vnto the day of his death, and dwelt in a seuerall house being a leper, for he was cut off from the house of the Lord: and Iotham his sonne was ouer the kings house, iudging the people of the land.21

22 ¶ Now the rest of the actes of Uzziah first and last, did Isaiah the prophet the sonne of Amoz write.

23 So Uzziah slept with his fathers, and they buried him with his fathers in the field of the buriall which belonged to the kings: for they saide, He is a leper: And Iotham his sonne reigned in his stead.