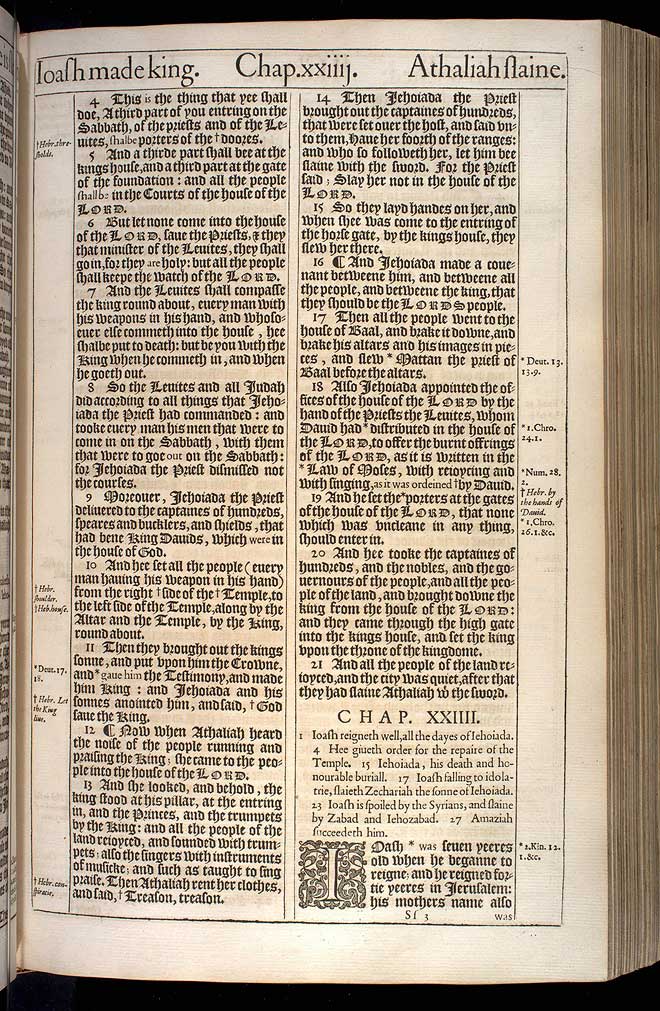 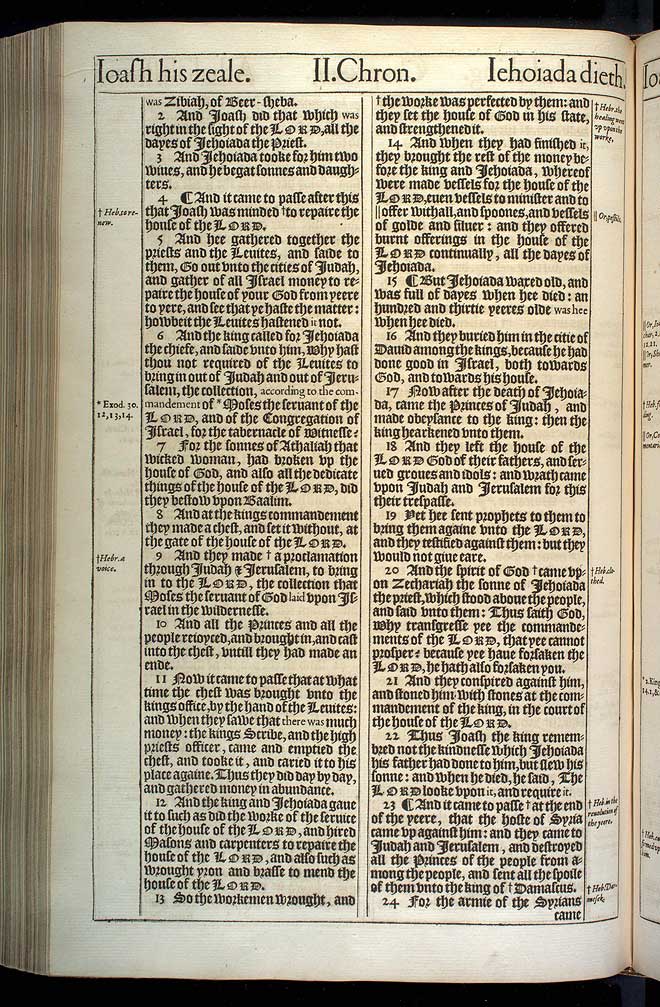 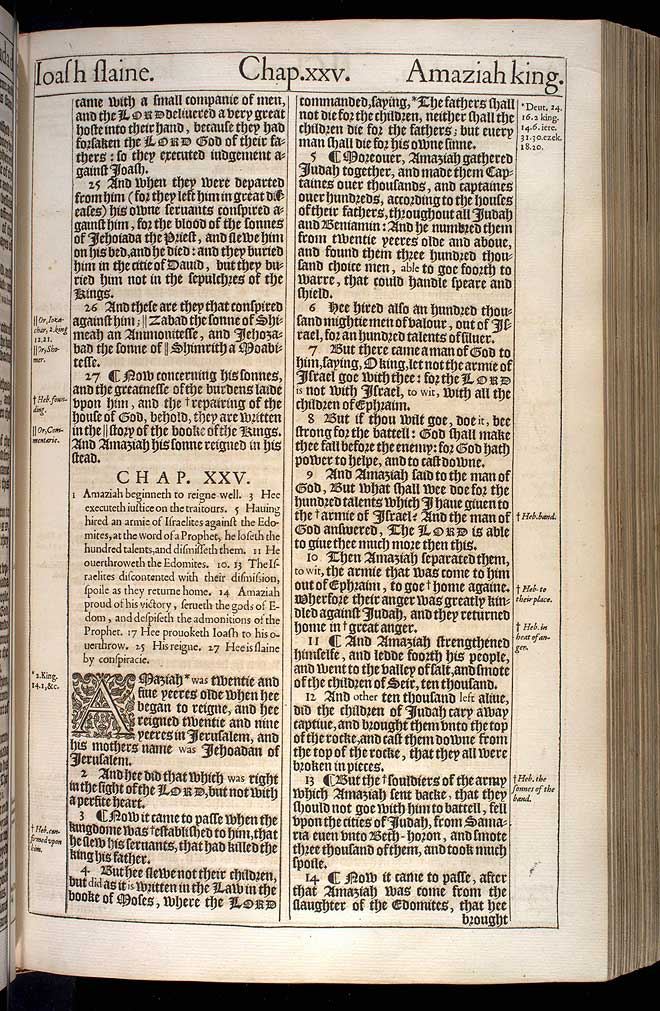 View this 2. Chronicles chapter 24 scan at a larger size

1 Ioash was seuen yeeres old when he beganne to reigne; and he reigned fortie yeeres in Ierusalem: his mothers name also was Zibiah, of Beer-sheba.1

2 And Ioash did that which was right in the sight of the Lord, all the dayes of Iehoiada the Priest.

3 And Iehoiada tooke for him two wiues, and he begat sonnes and daughters.

4 ¶ And it came to passe after this that Ioash was minded to repaire the house of the Lord.4

5 And hee gathered together the priests and the Leuites, and saide to them, Go out vnto the cities of Iudah, and gather of all Israel money to repaire the house of your God from yeere to yere, and see that ye haste the matter: howbeit the Leuites hastened it not.

6 And the king called for Iehoiada the chiefe, and saide vnto him, Why hast thou not required of the Leuites to bring in out of Iudah and out of Ierusalem, the collection, according to the commandement of Moses the seruant of the Lord, and of the Congregation of Israel, for the tabernacle of Witnesse?6

7 For the sonnes of Athaliah that wicked woman, had broken vp the house of God, and also all the dedicate things of the house of the Lord, did they bestow vpon Baalim.

8 And at the kings commandement they made a chest, and set it without, at the gate of the house of the Lord.

9 And they made a proclamation through Iudah & Ierusalem, to bring in to the Lord, the collection that Moses the seruant of God laid vpon Israel in the wildernesse.9

10 And all the Princes and all the people reioyced, and brought in, and cast into the chest, vntill they had made an ende.

11 Now it came to passe that at what time the chest was brought vnto the kings office, by the hand of the Leuites: and when they sawe that there was much money: the kings Scribe, and the high priests officer, came and emptied the chest, and tooke it, and caried it to his place againe. Thus they did day by day, and gathered money in abundance.

13 So the workemen wrought, and the worke was perfected by them: and they set the house of God in his state, and strengthened it.13

14 And when they had finished it, they brought the rest of the money before the king and Iehoiada, whereof were made vessels for the house of the Lord, euen vessels to minister and to offer withall, and spoones, and vessels of golde and siluer: and they offered burnt offerings in the house of the Lord continually, all the dayes of Iehoiada.14

15 ¶ But Iehoiada waxed old, and was full of dayes when hee died: an hundred and thirtie yeeres olde was hee when hee died.

16 And they buried him in the citie of Dauid among the kings, because he had done good in Israel, both towards God, and towards his house.

17 Now after the death of Iehoiada, came the Princes of Iudah, and made obeysance to the king: then the king hearkened vnto them.

18 And they left the house of the Lord God of their fathers, and serued groues and idols: and wrath came vpon Iudah and Ierusalem for this their trespasse.

19 Yet hee sent prophets to them to bring them againe vnto the Lord, and they testified against them: but they would not giue eare.

20 And the spirit of God came vpon Zechariah the sonne of Iehoiada the priest, which stood aboue the people, and said vnto them: Thus saith God, Why transgresse yee the commandements of the Lord, that yee cannot prosper? Because yee haue forsaken the Lord, he hath also forsaken you.20

21 And they conspired against him, and stoned him with stones at the commandement of the king, in the court of the house of the Lord.

22 Thus Ioash the king remembred not the kindnesse which Iehoiada his father had done to him, but slew his sonne: and when he died, he said, The Lord looke vpon it, and require it.

23 ¶ And it came to passe at the end of the yeere, that the hoste of Syria came vp against him: and they came to Iudah and Ierusalem, and destroyed all the Princes of the people from among the people, and sent all the spoile of them vnto the king of Damascus.23

24 For the armie of the Syrians came with a small companie of men, and the Lord deliuered a very great hoste into their hand, because they had forsaken the Lord God of their fathers: so they executed iudgement against Ioash.

25 And when they were departed from him (for they left him in great diseases) his owne seruants conspired against him, for the blood of the sonnes of Iehoiada the Priest, and slewe him on his bed, and he died: and they buried him in the citie of Dauid, but they buried him not in the sepulchres of the Kings.

27 ¶ Now concerning his sonnes, and the greatnesse of the burdens laide vpon him, and the repairing of the house of God, behold, they are written in the story of the booke of the Kings. And Amaziah his sonne reigned in his stead.27