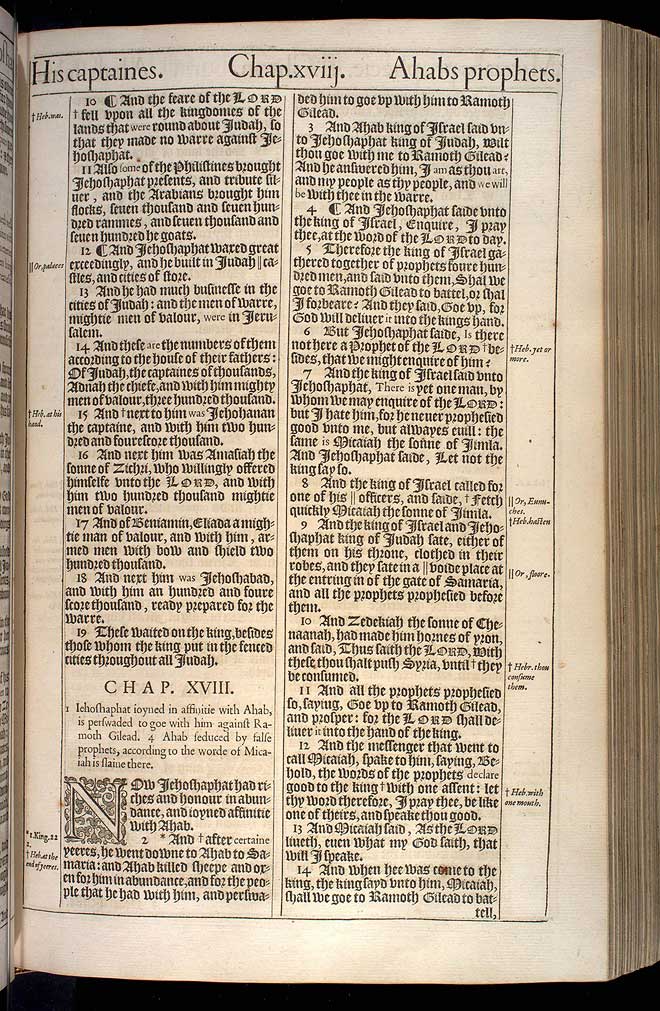 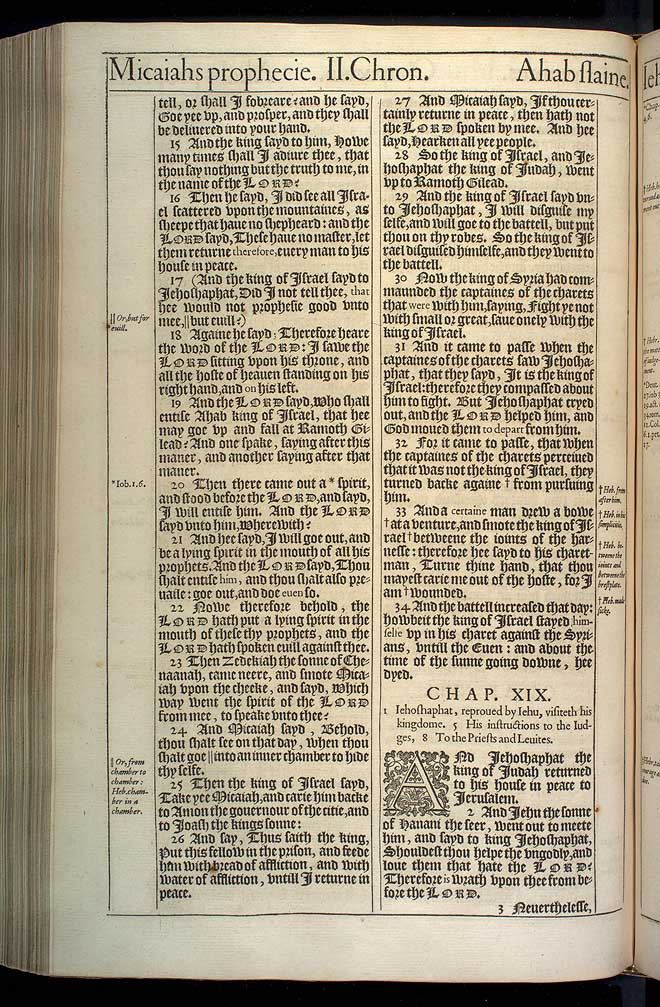 View this 2. Chronicles chapter 18 scan at a larger size

1 Iehoshaphat ioyned in affinitie with Ahab, is perswaded to goe with him against Ramoth Gilead. 4 Ahab seduced by false prophets, according to the worde of Micaiah is slaine there.

1 Now Iehoshaphat had riches and honour in abundance, and ioyned affinitie with Ahab.

2 And after certaine yeeres, he went downe to Ahab to Samaria: and Ahab killed sheepe and oxen for him in abundance, and for the people that he had with him, and perswaded him to goe vp with him to Ramoth Gilead.2

3 And Ahab king of Israel said vnto Iehoshaphat king of Iudah, Wilt thou goe with me to Ramoth Gilead? And he answered him, I am as thou art, and my people as thy people, and we will be with thee in the warre.

4 ¶ And Iehoshaphat saide vnto the king of Israel, Enquire, I pray thee, at the word of the Lord to day.

5 Therefore the king of Israel gathered together of prophets foure hundred men, and said vnto them, Shal we goe to Ramoth Gilead to battel, or shal I forbeare? And they said, Goe vp, for God will deliuer it into the kings hand.

6 But Iehoshaphat saide, Is there not here a Prophet of the Lord besides, that we might enquire of him?6

7 And the king of Israel said vnto Iehoshaphat, There is yet one man, by whom we may enquire of the Lord: but I hate him, for he neuer prophesied good vnto me, but alwayes euill: the same is Micaiah the sonne of Iimla. And Iehoshaphat saide, Let not the king say so.

8 And the king of Israel called for one of his officers, and saide, Fetch quickly Micaiah the sonne of Iimla.8

9 And the king of Israel and Iehoshaphat king of Iudah sate, either of them on his throne, clothed in their robes, and they sate in a voide place at the entring in of the gate of Samaria, and all the prophets prophesied before them.9

10 And Zedekiah the sonne of Chenaanah, had made him hornes of yron, and said, Thus saith the Lord, With these thou shalt push Syria, vntil they be consumed.10

11 And all the prophets prophesied so, saying, Goe vp to Ramoth Gilead, and prosper: for the Lord shall deliuer it into the hand of the king.

12 And the messenger that went to call Micaiah, spake to him, saying, Behold, the words of the prophets declare good to the king with one assent: let thy word therefore, I pray thee be like one of theirs, and speake thou good.12

13 And Micaiah said, As the Lord liueth, euen what my God saith, that will I speake.

14 And when hee was come to the king, the king sayd vnto him, Micaiah, shall we goe to Ramoth Gilead to battell, or shall I fobreare? and he sayd, Goe yee vp, and prosper, and they shall be deliuered into your hand.

15 And the king sayd to him, Howe many times shall I adiure thee, that thou say nothing but the truth to me, in the name of the Lord?

16 Then he sayd, I did see all Israel scattered vpon the mountaines, as sheepe that haue no shepheard: and the Lord sayd, These haue no master, let them returne therefore, euery man to his house in peace.

17 (And the king of Israel sayd to Iehoshaphat, Did I not tell thee, that hee would not prophesie good vnto mee, but euill?)17

18 Againe he sayd; Therefore heare the word of the Lord: I sawe the Lord sitting vpon his throne, and all the hoste of heauen standing on his right hand, and on his left.

19 And the Lord sayd, Who shall entise Ahab king of Israel, that hee may goe vp and fall at Ramoth Gilead? And one spake, saying after this maner, and another saying after that maner.

20 Then there came out a spirit, and stood before the Lord, and sayd, I will entise him. And the Lord sayd vnto him, Wherewith?20

21 And hee sayd, I will goe out, and be a lying spirit in the mouth of all his prophets. And the Lord sayd, Thou shalt entise him, and thou shalt also preuaile: goe out, and doe euen so.

22 Nowe therefore behold, the Lord hath put a lying spirit in the mouth of these thy prophets, and the Lord hath spoken euill against thee.

23 Then Zedekiah the sonne of Chenaanah, came neere, and smote Micaiah vpon the cheeke, and sayd, Which way went the spirit of the Lord from mee, to speake vnto thee?

24 And Micaiah sayd, Behold, thou shalt see on that day, when thou shalt goe into an inner chamber to hide thy selfe.24

25 Then the king of Israel sayd, Take yee Micaiah, and carie him backe to Amon the gouernour of the citie, and to Ioash the kings sonne:

26 And say, Thus saith the king, Put this fellow in the prison, and feede him with bread of affliction, and with water of affliction, vntill I returne in peace.

27 And Micaiah sayd, If thou certainly returne in peace, then hath not the Lord spoken by mee. And hee sayd, Hearken all yee people.

30 Now the king of Syria had commaunded the captaines of the charets that were with him, saying, Fight ye not with small or great, saue onely with the king of Israel.

31 And it came to passe when the captaines of the charets saw Iehoshaphat, that they sayd, It is the king of Israel: therefore they compassed about him to fight. But Iehoshaphat cryed out, and the Lord helped him, and God moued them to depart from him.

32 For it came to passe, that when the captaines of the charets perceiued that it was not the king of Israel, they turned backe againe from pursuing him.32

33 And a certaine man drew a bowe at a venture, and smote the king of Israel betweene the ioints of the harnesse: therefore hee sayd to his charetman, Turne thine hand, that thou mayest carie me out of the hoste, for I am wounded.33

34 And the battell increased that day: howbeit the king of Israel stayed himselfe vp in his charet against the Syrians, vntill the Euen: and about the time of the sunne going downe, hee dyed.