1 And I turned, and lift vp mine eyes, and looked, and beholde, there came foure charets out from betweene two mountaines, and the mountaines were mountaines of brasse.

2 In the first charet were red horses, and in the second charet, blacke horses.

3 And in the third charet white horses, and in the fourth charet grisled and bay horses.

4 Then I answered, and said vnto the Angel that talked with mee, What are these, my Lord ?

5 And the Angel answered and said vnto me, These are the foure spirits of the heauens, which go forth from standing before the Lord of all the earth.

6 The blacke horses which are therin, goe forth into the North countrey, and the white goe forth after them, and the grisled goe forth toward the South countrey.

9 ¶ And the word of the Lord came vnto me, saying,

10 Take of them of the captiuitie, euen of Heldai, of Tobijah, and of Iedaiah, which are come from Babylon, and come thou the same day, and go into the house of Iosiah the son of Zephaniah.

11 Then take siluer, and golde, and make crownes, and set them vpon the head of Ioshua the sonne of Iosedech, the high priest.

12 And speake vnto him, saying, Thus speaketh the Lord of hostes, saying, Behold, the man whose name is the Branch, and he shall growe vp out of his place, and he shall build the Temple of the Lord:

14 And the crownes shall bee to Helem, and to Tobijah, and to Iedaiah, and to Hen the sonne of Zephaniah for a memoriall, in the Temple of the Lord.

15 And they that are farre off, shall come and build in the Temple of the Lord, and ye shall knowe that the Lord of hosts hath sent me vnto you. And this shall come to passe, if ye will diligently obey the voyce of the Lord your God.

The vision of the chariots. (1-8) Joshua, the high priest, crowned as a type of Christ. (9-15)1-8 This vision may represent the ways of Providence in the government of this lower world. Whatever the providences of God about us are, as to public or private affairs, we should see them all as coming from between the mountains of brass, the immoveable counsels and decrees of God; and therefore reckon it as much our folly to quarrel with them, as it is our duty to submit to them. His providences move swiftly and strongly as chariots, but all are directed and governed by his infinite wisdom and sovereign will. The red horses signify war and bloodshed. The black, signify the dismal consequences of war, famines, pestilences, and desolations. The white, signify the return of comfort, peace, and prosperity. The mixed colour, signify events of different complexions, a day of prosperity and a day of adversity. The angels go forth as messengers of God's counsels, and ministers of his justice and mercy. And the secret motions and impulses upon the spirits of men, by which the designs of Providence are carried on, are these four spirits of the heavens, which go forth from God, and fulfil what the God of the spirits of all flesh appoints. All the events which take place in the world spring from the unchangeable counsels of the Lord, which are formed in unerring wisdom, perfect justice, truth, and goodness; and from history it is found that events happened about the period when this vision was sent to the prophet, which seem referred to therein.

9-15 Some Jews from Babylon brought an offering to the house of God. Those who cannot forward a good work by their persons, must, as they are able, forward it by their purses: if some find hands, let others fill them. Crowns are to be made, and put upon the head of Joshua. The sign was used, to make the promise more noticed, that God will, in the fulness of time, raise up a great High Priest, like Joshua, who is but the figure of one that is to come. Christ is not only the Foundation, but the Founder of this temple, by his Spirit and grace. Glory is a burden, but not too heavy for Him to bear who upholds all things. The cross was His glory, and he bore that; so is the crown an exceeding weight of glory, and he bears that. The counsel of peace should be between the priest and the throne, between the priestly and kingly offices of Jesus Christ. The peace and welfare of the gospel church, and of all believers, shall be wrought, though not by two several persons, yet by two several offices meeting in one; Christ, purchasing all peace by his priesthood, maintaining and defending it by his kingdom. The crowns used in this solemnity must be kept in the temple, as evidence of this promise of the Messiah. Let us not think of separating what God has joined in his counsel of peace. We cannot come to God by Christ as our Priest, if we refuse to have him rule over us as our King. We have no real ground to think our peace is made with God, unless we try to keep his commandments.

View All Discussusion for Zechariah Chapter 6... 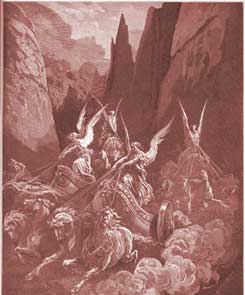 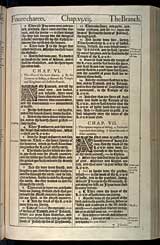