1 Open thy doores, O Lebanon, that the fire may deuoure thy cedars.

2 Howle firre tree, for the cedar is fallen; because all the mighty are spoiled; howle O yee okes of Bashan, for the forrest of the vintage is come downe.

4 Thus saith the Lord my God; Feede the flocke of the slaughter;

5 Whose possessours slay them, and hold themselues not guiltie: and they that sell thē say, Blessed be the Lord; for I am rich: and their owne shepheards pitie them not.

6 For I will no more pitie the inhabitants of the land, saith the Lord: but loe, I will deliuer the men euery one into his neighbours hand, and into the hand of his King, and they shall smite the land, and out of their hand I will not deliuer them.

7 And I will feede the flocke of slaughter, euen you, O poore of the flock: and I tooke vnto me two staues; the one I called Beautie, and the other I called Bandes, and I fed the flocke.

8 Three shepheards also I cut off in one moneth, and my soule loathed them, and their soule also abhorred mee.

9 Then said I, I will not feede you: that that dieth, let it die: and that that is to be cut off, let it be cut off, and let the rest eate, euery one the flesh of another.

10 ¶ And I tooke my staffe, euen Beautie, and cut it asunder, that I might breake my couenant which I had made with all the people.

11 And it was broken in that day: and so the poore of the flocke that waited vpon me, knew that it was the word of the Lord.

12 And I said vnto them, If yee thinke good, giue me my price: and if not, forbeare: so they weighed for my price thirtie pieces of siluer.

13 And the Lord said vnto mee, Cast it vnto the potter: a goodly price, that I was prised at of them. And I tooke the thirtie pieces of siluer, and cast them to the potter in the house of the Lord.

14 Then I cut asunder mine other staffe, euen Bands, that I might break the brotherhood betweene Iudah and Israel.

15 ¶ And the Lord said vnto me, Take vnto thee yet the instruments of a foolish shepheard.

16 For loe, I wil raise vp a shepherd in the land, which shall not visit those that bee cut off, neither shall seeke the yong one, nor heale that that is broken, nor feed that that standeth still: but he shal eate the flesh of the fat, and teare their clawes in pieces.

Destruction to come upon the Jews. (1-3) The Lord's dealing with the Jews. (4-14) The emblem and curse of a foolish shepherd. (15-17)1-3 In figurative expressions, that destruction of Jerusalem, and of the Jewish church and nation, is foretold, which our Lord Jesus, when the time was at hand, prophesied plainly and expressly. How can the fir trees stand, if the cedars fall? The falls of the wise and good into sin, and the falls of the rich and great into trouble, are loud alarms to those every way their inferiors. It is sad with a people, when those who should be as shepherds to them, are as young lions. The pride of Jordan was the thickets on the banks; and when the river overflowed the banks, the lions came up from them roaring. Thus the doom of Jerusalem may alarm other churches.

4-14 Christ came into this world for judgment to the Jewish church and nation, which were wretchedly corrupt and degenerate. Those have their minds wofully blinded, who do ill, and justify themselves in it; but God will not hold those guiltless who hold themselves so. How can we go to God to beg a blessing on unlawful methods of getting wealth, or to return thanks for success in them? There was a general decay of religion among them, and they regarded it not. The Good Shepherd would feed his flock, but his attention would chiefly be directed to the poor. As an emblem, the prophet seems to have taken two staves; Beauty, denoted the privileges of the Jewish nation, in their national covenant; the other he called Bands, denoting the harmony which hitherto united them as the flock of God. But they chose to cleave to false teachers. The carnal mind and the friendship of the world are enmity to God; and God hates all the workers of iniquity: it is easy to foresee what this will end in. The prophet demanded wages, or a reward, and received thirty pieces of silver. By Divine direction he cast it to the potter, as in disdain for the smallness of the sum. This shadowed forth the bargain of Judas to betray Christ, and the final method of applying it. Nothing ruins a people so certainly, as weakening the brotherhood among them. This follows the dissolving of the covenant between God and them: when sin abounds, love waxes cold, and civil contests follow. No wonder if those fall out among themselves, who have provoked God to fall out with them. Wilful contempt of Christ is the great cause of men's ruin. And if professors rightly valued Christ, they would not contend about little matters.

15-17 God, having showed the misery of this people in their being justly left by the Good Shepherd, shows their further misery in being abused by foolish shepherds. The description suits the character Christ gives of the scribes and Pharisees. They never do any thing to support the weak, or comfort the feeble-minded; but seek their own ease, while they are barbarous to the flock. The idol shepherd has the garb and appearance of a shepherd, receives submission, and is supported at much expense; but he leaves the flock to perish through neglect, or leads them to ruin by his example. This suits many in different churches and nations, but the warning had an awful fulfilment in the Jewish teachers. And while such deceive others to their ruin, they will themselves have the deepest condemnation.

View All Discussusion for Zechariah Chapter 11... 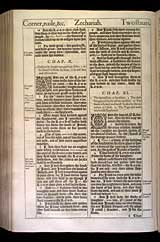