Why is Wisdom of Solomon shown with the King James Bible?

1 Better it is to haue no children, and to haue vertue: for the memoriall thereof is immortal: because it is knowen with God and with men.

2 When it is present, men take example at it, and when it is gone they desire it: it weareth a crown, and triumpheth for euer, hauing gotten the victorie, striuing for vndefiled rewards.

3 But the multiplying brood of the vngodly shall not thriue, nor take deepe rooting from bastard slips, nor lay any fast foundation.

4 For though they flourish in branches for a time: yet standing not fast, they shall be shaken with the winde: and through the force of windes they shall be rooted out.

5 The vnperfect branches shall bee broken off, their fruit vnprofitable, not ripe to eate: yea meet for nothing.

6 For children begotten of vnlawfull beds, are witnesses of wickednes against their parents in their triall.

7 But though the righteous be preuented with death: yet shal he be in rest.

8 For honourable age is not that which standeth in length of time, nor that is measured by number of yeeres.

9 But wisedome is the gray haire vnto men, & an vnspotted life is old age.

10 He pleased God, and was beloued of him: so that liuing amongst sinners, he was translated.

11 Yea, speedily was he taken away, lest that wickednes should alter his vnderstanding, or deceit beguile his soule.

12 For the bewitching of naughtines doth obscure things that are honest: and the wandring of concupiscence, doth vndermine the simple mind.

13 He being made perfect in a short time, fulfilled a long time.

14 For his soule pleased the Lord: therefore hasted he to take him away, from among the wicked.

15 This the people saw, and vnderstood it not: neither laid they vp this in their mindes, That his grace and mercie is with his Saints, and that he hath respect vnto his chosen.

16 Thus the righteous that is dead, shall condemne the vngodly, which are liuing, and youth that is soone perfected, the many yeeres and old age of the vnrighteous.

17 For they shall see the end of the wise, & shall not vnderstand what God in his counsell hath decreed of him, and to what end the Lord hath set him in safetie.

18 They shal see him and despise him, but God shall laugh them to scorne, and they shal hereafter be a vile carkeis, and a reproch among the dead for euermore.

19 For he shall rend them, and cast them downe headlong, that they shalbe speechles: and he shal shake them from the foundation: and they shall bee vtterly laid waste, and be in sorow: and their memoriall shall perish.

20 And when they cast vp the accounts of their sinnes, they shall come with feare: and their owne iniquities shall conuince them to their face.

View All Discussusion for Wisdom of Solomon Chapter 4... 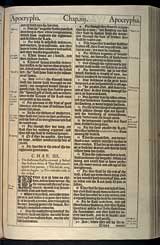