1 Paul a seruant of God, and an Apostle of Iesus Christ, according to the Faith of Gods Elect, and the acknowledging of the trueth which is after godlinesse,

2 In hope of eternall life, which God that cannot lie, promised before the world began:

3 But hath in due times manifested his word through preaching, which is committed vnto mee according to the commandement of God our Sauiour:

4 To Titus mine owne Sonne after the common faith, Grace, mercie, and peace from God the Father, and the Lord Iesus Christ our Sauiour.

5 For this cause left I thee in Crete, that thou shouldest set in order the things that are wanting, and ordaine Elders in euery citie, as I had appointed thee.

6 If any be blamelesse, the husband of one wife, hauing faithfull children, not accused of riot, or vnruly.

7 For a Bishop must be blameles, as the steward of God: not selfewilled, not soone angry, not giuen to wine, no striker, not giuen to filthie lucre,

8 But a louer of hospitality, a louer of good men, sober, iust, holy, temperate,

9 Holding fast the faithfull word, as hee hath beene taught, that he may bee able by sound doctrine, both to exhort and to conuince the gainsayers.

10 For there are many vnruly and vaine talkers and deceiuers, specially they of the circumcision:

11 Whose mouthes must be stopped, who subuert whole houses, teaching things which they ought not, for filthie lucres sake.

12 One of themselues, euen a Prophet of their owne, said: The Cretians are alway lyers, euill beasts, slow bellies.

13 This witnesse is true: wherefore rebuke them sharpely that they may be sound in the faith;

14 Not giuing heede to Iewish fables, and commandements of men that turne from the trueth.

15 Unto the pure all things are pure, but vnto them that are defiled, and vnbeleeuing, is nothing pure: but euen their mind and conscience is defiled.

16 They professe that they know God; but in workes they deny him, being abominable, and disobedient, and vnto euery good worke reprobate.

This epistle chiefly contains directions to Titus concerning the elders of the Church, and the manner in which he should give instruction; and the latter part tells him to urge obedience to magistrates, to enforce good works, avoid foolish questions, and shun heresies. The instructions the apostle gave are all plain and simple. The Christian religion was not formed to answer worldly or selfish views, but it is the wisdom of God and the power of God.The apostle salutes Titus. (1-4) The qualifications of a faithful pastor. (5-9) The evil temper and practices of false teachers. (10-16)1-4 All are the servants of God who are not slaves of sin and Satan. All gospel truth is according to godliness, teaching the fear of God. The intent of the gospel is to raise up hope as well as faith; to take off the mind and heart from the world, and to raise them to heaven and the things above. How excellent then is the gospel, which was the matter of Divine promise so early, and what thanks are due for our privileges! Faith comes by hearing, and hearing by the word of God; and whoso is appointed and called, must preach the word. Grace is the free favour of God, and acceptance with him. Mercy, the fruits of the favour, in the pardon of sin, and freedom from all miseries both here and hereafter. And peace is the effect and fruit of mercy. Peace with God through Christ who is our Peace, and with the creatures and ourselves. Grace is the fountain of all blessings. Mercy, and peace, and all good, spring out of this.

5-9 The character and qualification of pastors, here called elders and bishops, agree with what the apostle wrote to Timothy. Being such bishops and overseers of the flock, to be examples to them, and God's stewards to take care of the affairs of his household, there is great reason that they should be blameless. What they are not to be, is plainly shown, as well as what they are to be, as servants of Christ, and able ministers of the letter and practice of the gospel. And here are described the spirit and practice becoming such as should be examples of good works.

10-16 False teachers are described. Faithful ministers must oppose such in good time, that their folly being made manifest, they may go no further They had a base end in what they did; serving a worldly interest under pretence of religion: for the love of money is the root of all evil. Such should be resisted, and put to shame, by sound doctrine from the Scriptures. Shameful actions, the reproach of heathens, should be far from Christians; falsehood and lying, envious craft and cruelty, brutal and sensual practices, and idleness and sloth, are sins condemned even by the light of nature. But Christian meekness is as far from cowardly passing over sin and error, as from anger and impatience. And though there may be national differences of character, yet the heart of man in every age and place is deceitful and desperately wicked. But the sharpest reproofs must aim at the good of the reproved; and soundness in the faith is most desirable and necessary. To those who are defiled and unbelieving, nothing is pure; they abuse, and turn things lawful and good into sin. Many profess to know God, yet in their lives deny and reject him. See the miserable state of hypocrites, such as have a form of godliness, but are without the power; yet let us not be so ready to fix this charge on others, as careful that it does not apply to ourselves.

View All Discussusion for Titus Chapter 1... 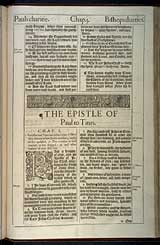