Why is Susanna shown with the King James Bible?

1 There dwelt a man in Babylon, called Ioacim.

2 And hee tooke a wife, whose name was Susanna, the daughter of Chelcias, a very faire woman, and one that feared the Lord.

3 Her parents also were righteous, and taught their daughter according to the Law of Moses.

4 Now Ioacim was a great rich man, and had a faire garden ioyning vnto his house, and to him resorted the Iewes: because he was more honourable then all others.

5 The same yeere were appointed two of the Ancients of the people to be iudges, such as the Lord spake of, that wickednesse came from Babylon from ancient iudges, who seemed to gouerne the people.

6 These kept much at Ioacims house: and all that had any suits in lawe, came vnto them.

7 Now when the people departed away at noone, Susanna went into her husbands garden to walke.

8 And the two Elders saw her going in euery day and walking: so that their lust was inflamed toward her.

9 And they peruerted their owne mind, and turned away their eyes, that they might not looke vnto heauen, nor remember iust iudgements.

10 And albeit they both were wounded with her loue: yet durst not one shew another his griefe.

11 For they were ashamed to declare their lust, that they desired to haue to doe with her.

12 Yet they watched diligently from day to day to see her.

13 And the one said to the other, Let vs now goe home: for it is dinner time.

14 So when they were gone out, they parted the one from the other, and turning backe againe they came to the same place, and after that they had asked one another the cause, they acknowledged their lust: then appointed they a time both together, when they might find her alone.

15 And it fell out as they watched a fit time, she went in as before, with two maids onely, and she was desirous to wash her selfe in the garden: for it was hot.

16 And there was no body there saue the two Elders, that had hid themselues, and watched her.

17 Then she said to her maids, Bring me oile and washing bals, and shut the garden doores, that I may wash me.

18 And they did as she bad them, and shut the garden doores, and went out themselues at priuie doores to fetch the things that she had commaunded them: but they saw not the Elders, because they were hid.

19 Now when the maids were gone forth, the two Elders rose vp, and ran vnto her, saying,

20 Behold, the garden doores are shut, that no man can see vs, and we are in loue with thee: therefore consent vnto vs, and lie with vs.

21 If thou wilt not, we will beare witnesse against thee, that a young man was with thee: and therefore thou didst send away thy maides from thee.

22 Then Susanna sighed and said, I am straited on euery side: for if I doe this thing, it is death vnto me: and if I doe it not, I cannot escape your hands.

23 It is better for me to fall into your hands, and not doe it: then to sinne in the sight of the Lord.

24 With that Susanna cried with a loud voice: and the two Elders cried out against her.

25 Then ranne the one, and opened the garden doore.

26 So when the seruants of the house heard the crie in the garden, they rushed in at a priuie doore to see what was done vnto her.

27 But when the Elders had declared their matter, the seruants were greatly ashamed: for there was neuer such a report made of Susanna.

28 And it came to passe the next day, when the people were assembled to her husband Ioacim, the two Elders came also full of mischieuous imagination against Susanna to put her to death,

29 And said before the people, Send for Susanna, the daughter of Chelcias, Ioacims wife. And so they sent.

30 So she came with her father and mother, her children and all her kinred.

31 Now Susanna was a very delicate woman and beauteous to behold.

32 And these wicked men commanded to vncouer her face (for she was couered) that they might be filled with her beautie.

33 Therefore her friends, and all that saw her, wept.

34 Then the two Elders stood vp in the mids of the people, and laid their hands vpon her head.

35 And she weeping looked vp towards heauen: for her heart trusted in the Lord.

36 And the Elders said, As we walked in the garden alone, this woman came in, with two maides, and shut the garden doores, & sent the maides away.

37 Then a young man who there was hid, came vnto her & lay with her.

38 Then we that stood in a corner of the garden, seeing this wickednesse, ran vnto them.

39 And when we saw them together, the man we could not hold: for he was stronger then we, and opened the doore, and leaped out.

40 But hauing taken this woman, we asked who the young man was: but she would not tell vs: these things doe we testifie.

41 Then the assembly beleeued them, as those that were the Elders and Iudges of the people: so they condemned her to death.

42 Then Susanna cried out with a loud voice and said: O euerlasting God that knowest the secrets, and knowest all things before they be:

43 Thou knowest that they haue borne false witnesse against me, and behold I must die: whereas I neuer did such things, as these men haue maliciously inuented against me.

44 And the Lord heard her voice.

45 Therefore when she was led to be put to death: the Lord raised vp the holy spirit of a young youth, whose name was Daniel,

46 Who cried with a loud voice: I am cleare frō the blood of this woman.

47 Then all the people turned them towards him, & said: what meane these words that thou hast spoken?

48 So he standing in the mids of them, said, Are ye such fooles ye sonnes of Israel, that without examination or knowledge of the truth, ye haue condemned a daughter of Israel?

49 Returne againe to the place of iudgement: for they haue borne false witnesse against her

50 Wherefore all the people turned againe in hast, and the Elders said vnto him, Come sit downe among vs, and shew it vs, seeing God hath giuen thee the honour of an Elder.

51 Then said Daniel vnto them, Put these two aside one farre from another, and I will examine them.

52 So when they were put asunder one from another, hee called one of them, and said vnto him, O thou that art waxen old in wickednesse: now thy sinnes which thou hast committed aforetime, are come to light.

53 For thou hast pronounced false iudgement, and hast condemned the innocent, and hast let the guiltie goe free, albeit the Lord saith, The innocent and righteous shalt thou not slay.

54 Now then if thou hast seene her: tell me, Under what tree sawest thou them companying together? who answered, Under a masticke tree.

55 And Daniel said, Uery wel; Thou hast lied against thine owne head: for euen now the Angel of God hath receiued the sentence of God, to cut thee in two.

56 So hee put him aside, and commanded to bring the other, & said vnto him, O thou seed of Chanaan, and not of Iuda, beauty hath deceiued thee, and lust hath peruerted thine heart.

57 Thus haue yee dealt with the daughters of Israel, and they for feare companied with you: but the daughter of Iuda would not abide your wickednesse.

58 Now therefore tell mee, Under what tree didst thou take them companying together? who answered, Under a holme tree.

59 Then said Daniel vnto him, Well: thou hast also lied against thine owne head: for the Angel of God waiteth with the sword to cut thee in two, that he may destroy you.

60 With that all the assembly cried out with a lowd voice, and praised God who saueth them that trust in him.

61 And they arose against the two Elders, (for Daniel had conuicted them of false witnesse by their owne mouth)

62 And according to the Law of Moses, they did vnto them in such sort as they malitiously intended to doe to their neighbour: And they put them to death. Thus the innocent blood was saued the same day.

63 Therefore Chelcias and his wife praised God for their daughter Susanna, with Ioacim her husband, and all the kinred: because there was no dishonestie found in her.

64 From that day foorth was Daniel had in great reputation in the sight of the people.

View All Discussusion for Susanna Chapter 1... 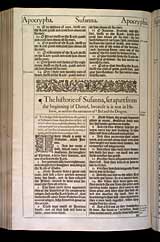