1 By night on my bed I sought him whome my soule loueth. I sought him, but I found him not.

2 I will rise now, and goe about the citie in the streets, and in the broad wayes I will seeke him whom my soule loueth: I sought him, but I found him not.

3 The watchmen that goe about the citie, found me: to whom I said, Saw ye him whom my soule loueth?

4 It was but a litle that I passed from them, but I found him whome my soule loueth: I helde him, and would not let him goe, vntill I had brought him into my mothers house, and into the chamber of her that conceiued me.

5 I charge you, O ye daughters of Ierusalem, by the Roes and by the Hindes of the field, that ye stirre not vp, nor awake my loue, till he please.

6 ¶ Who is this that commeth out of the wildernes like pillars of smoke, perfumed with myrrhe and frankincense, with all powders of the merchant?

7 Behold his bed, which is Solomons: threescore valiant men are about it, of the valiant of Israel:

8 They all hold swords, being expert in warre: Euery man hath his sword vpon his thigh, because of feare in the night.

9 King Solomon made himselfe a charet of the wood of Lebanon.

10 He made the pillars thereof of siluer, the bottome thereof of gold, the couering of it, of purple; the midst thereof being paued with loue, for the daughters of Ierusalem.

11 Goe foorth, O yee daughters of Zion, and behold king Solomon with the Crowne wherewith his mother crowned him in the day of his espousals, and in the day of the gladnesse of his heart.

Commentary for Song of Solomon 3

The trials of the church by the withdrawing of Christ. (1-5) The excellences of the church, The care of Christ for her. (6-11)1-5 It was hard to the Old Testament church to find Christ in the ceremonial law; the watchmen of that church gave little assistance to those who sought after him. The night is a time of coldness, darkness, and drowsiness, and of dim apprehensions concerning spiritual things. At first, when uneasy, some feeble efforts are made to obtain the comfort of communion with Christ. This proves in vain; the believer is then roused to increased diligence. The streets and broad-ways seem to imply the means of grace in which the Lord is to be sought. Application is made to those who watch for men's souls. Immediate satisfaction is not found. We must not rest in any means, but by faith apply directly to Christ. The holding of Christ, and not letting him go, denotes earnest cleaving to him. What prevails is a humble, ardent suing by prayer, with a lively exercise of faith on his promises. So long as the faith of believers keeps hold of Christ, he will not be offended at their earnest asking, yea, he is well pleased with it. The believer desires to make others acquainted with his Saviour. Wherever we find Christ, we must take him home with us to our houses, especially to our hearts; and we should call upon ourselves and each other, to beware of grieving our holy Comforter, and provoking the departure of the Beloved.

6-11 A wilderness is an emblem of the world; the believer comes out of it when he is delivered from the love of its sinful pleasures and pursuits, and refuses to comply with its customs and fashions, to seek happiness in communion with the Saviour. A poor soul shall come up, at last, under the conduct of the Comforter; like a cloud of incense ascending from the altar, or the smoke of the burnt-offerings. This signifies pious and devout affections, and the mounting of the soul heaven-ward. The believer is filled with the graces of God's Spirit; his devotions now are very lively. These graces and comforts are from the heavenly Canaan. He, who is the Peace of his people, the King of the heavenly Zion, has provided for the safe conveyance of his redeemed through the wilderness of this world. The bed, or palanquin, was contrived for rest and easy conveyance, but its beauty and magnificence showed the quality of its owner. The church is well guarded; more are with her than are against her: believers, when they repose in Christ, and with him, though they have their fears in the night, are yet safe. The chariot here denotes the covenant of redemption, the way of our salvation. This is that work of Christ, which makes him loved and admired in the eyes of believers. It is framed and contrived, both for the glory of Christ, and for the comfort of believers; it is well ordered in all things and sure. The blood of the covenant, that rich purple, is the cover of this chariot, by which believers are sheltered from the wind and storms of Divine wrath, and the troubles of this world; but the midst of it is that love of Christ which passes knowledge, this is for believers to repose upon. Christ, in his gospel, manifests himself. Take special notice of his crown. Applying this to Christ, it speaks the honour put upon him, and his power and dominion.

View All Discussusion for Song of Solomon Chapter 3... 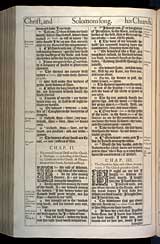