1 Nowe it came to passe in the dayes when þe Iudges ruled, that there was a famine in the land: and a certaine man of Bethlehem Iudah, went to soiourne in the countrey of Moab, he, and his wife, and his two sonnes.

3 And Elimelech Naomies husband died, and shee was left, and her two sonnes;

5 And Mahlon and Chilion died also both of them, and the woman was left of her two sonnes, and her husband.

7 Wherefore she went foorth out of the place where she was, and her two daughters in law with her: and they went on the way to returne vnto the land of Iudah.

8 Aud Naomi said vnto her two daughters in law, Goe, returne each to her mothers house: the Lord deale kindly with you, as ye haue dealt with the dead, and with me.

9 The Lord graunt you, that you may finde rest each of you in the house of her husband. Then she kissed them, and they lift vp their voyce and wept.

10 And they said vnto her, Surely wee will returne with thee, vnto thy people.

11 And Naomi said, Turne againe, my daughters: why will you goe with mee? Are there yet any moe sonnes in my wombe, that they may be your husbands?

12 Turne againe, my daughters, go your way, for I am too old to haue an husband: if I should say, I haue hope, if I should haue a husband also to night, and should also beare sonnes:

13 Would ye tary for them till they were growen? would ye stay for them from hauing husbands? nay my daughters: for it grieueth me much for your sakes, that the hand of the Lord is gone out against me.

14 And they lift vp their voyce, and wept againe: and Orpah kissed her mother in law, but Ruth claue vnto her.

16 And Ruth said, Intreate mee not to leaue thee, or to returne from following after thee: for whither thou goest, I will goe; and where thou lodgest, I will lodge: thy people shall be my people, and thy God my God:

17 Where thou diest, wil I die, and there will I bee buried: the Lord doe so to me, and more also, if ought but death part thee and me.

18 When shee sawe that shee was stedfastly minded to goe with her, then shee left speaking vnto her.

19 ¶ So they two went vntill they came to Bethlehem: And it came to passe when they were come to Bethlehem, that all the citie was mooued about them, and they said, Is this Naomi?

20 And she said vnto them, Call me not Naomi; call mee Mara: for the Almightie hath dealt very bitterly with me.

21 I went out full, and the Lord hath bought me home againe emptie: Why then call ye me Naomi, seeing the Lord hath testified against me, and the Almighty hath afflicted me?

22 So Naomi returned, and Ruth the Moabitesse her daughter in law with her, which returned out of the countrey of Moab: and they came to Bethlehem, in the beginning of barley haruest.

We find in this book excellent examples of faith, piety, patience, humility, industry, and loving-kindness, in the common events of life. Also we see the special care which God's providence take of our smallest concerns, encouraging us to full trust therein. We may view this book as a beautiful, because natural representation of human life; as a curious detail of important facts; and as a part of the plan of redemption.Elimelech and his sons die in the land of Moab. (1-5) Naomi returns home. (6-14) Orpah stays behind, but Ruth goes with Naomi. (15-18) They come to Bethlehem. (19-22)1-5 Elimelech's care to provide for his family, was not to be blamed; but his removal into the country of Moab could not be justified. And the removal ended in the wasting of his family. It is folly to think of escaping that cross, which, being laid in our way, we ought to take up. Changing our place seldom is mending it. Those who bring young people into bad acquaintance, and take them out of the way of public ordinances, thought they may think them well-principled, and armed against temptation, know not what will be the end. It does not appear that the women the sons of Elimelech married, were proselyted to the Jewish religion. Earthly trials or enjoyments are of short continuance. Death continually removes those of every age and situation, and mars all our outward comforts: we cannot too strongly prefer those advantages which shall last for ever.

6-14 Naomi began to think of returning, after the death of her two sons. When death comes into a family, it ought to reform what is amiss there. Earth is made bitter to us, that heaven may be made dear. Naomi seems to have been a person of faith and piety. She dismissed her daughters-in-law with prayer. It is very proper for friends, when they part, to part with them thus part in love. Did Naomi do well, to discourage her daughters from going with her, when she might save them from the idolatry of Moab, and bring them to the faith and worship of the God of Israel? Naomi, no doubt, desired to do that; but if they went with her, she would not have them to go upon her account. Those that take upon them a profession of religion only to oblige their friends, or for the sake of company, will be converts of small value. If they did come with her, she would have them make it their deliberate choice, and sit down first and count the cost, as it concerns those to do who make a profession of religion. And more desire "rest in the house of a husband," or some wordly settlement or earthly satisfaction, than the rest to which Christ invites our souls; therefore when tried they will depart from Christ, though perhaps with some sorrow.

15-18 See Ruth's resolution, and her good affection to Naomi. Orpah was loth to part from her; yet she did not love her well enough to leave Moab for her sake. Thus, many have a value and affection for Christ, yet come short of salvation by him, because they will not forsake other things for him. They love him, yet leave him, because they do not love him enough, but love other things better. Ruth is an example of the grace of God, inclining the soul to choose the better part. Naomi could desire no more than the solemn declaration Ruth made. See the power of resolution; it silences temptation. Those that go in religious ways without a stedfast mind, stand like a door half open, which invites a thief; but resolution shuts and bolts the door, resists the devil and forces him to flee.

19-22 Naomi and Ruth came to Bethlehem. Afflictions will make great and surprising changes in a little time. May God, by his grace, fit us for all such changes, especially the great change!, Naomi signifies "pleasant," or "amiable;" Mara, "bitter," or "bitterness." She was now a woman of a sorrowful spirit. She had come home empty, poor, a widow and childless. But there is a fulness for believers of which they never can be emptied; a good part which shall not be taken from those who have it. The cup of affliction is a "bitter" cup, but she owns that the affliction came from God. It well becomes us to have our hearts humbled under humbling providences. It is not affliction itself, but affliction rightly borne, that does us good.

View All Discussusion for Ruth Chapter 1... 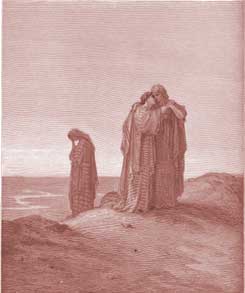 Naomi and Her Daughters-in-Law 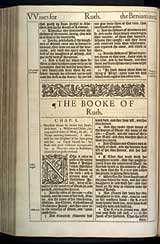