1 I say the trueth in Christ, I lie not, my conscience also bearing mee witnesse in the holy Ghost,

2 That I haue great heauinesse, and continuall sorrow in my heart.

3 For I could wish that my selfe were accursed from Christ, for my brethren my kinsemen according to the flesh:

4 Who are Israelites: to whom perteineth the adoption, and the glory, and the couenants, and the giuing of the Law, and the seruice of God, and the promises:

5 Whose are the fathers, and of whom as concerning the flesh Christ came, who is ouer all, God blessed for euer, Amen.

6 Not as though the word of God hath taken none effect. For they are not all Israel which are of Israel:

7 Neither because they are the seed of Abraham are they all children: but in Isaac shall thy seed be called.

9 For this is the word of promise, At this time will I come, and Sara shall haue a sonne.

10 And not onely this, but when Rebecca also had conceiued by one, euen by our father Isaac,

11 (For the children being not yet borne, neither hauing done any good or euil, that the purpose of God according to election might stand, not of workes, but of him that calleth.)

12 It was said vnto her, The elder shall serue the yonger.

13 As it is written, Iacob haue I loued, but Esau haue I hated.

14 What shall we say then? Is there vnrighteousnes with God? God forbid.

16 So then it is not of him that willeth, nor of him that runneth, but of God that sheweth mercy.

17 For the Scripture saith vnto Pharaoh, Euen for this same purpose haue I raised thee vp, that I might shew my power in thee, and that my Name might bee declared throughout all the earth.

18 Therefore hath hee mercie on whom hee will haue mercy, and whom he will, he hardeneth.

19 Thou wilt say then vnto mee; Why doeth he yet find fault? For who hath resisted his will?

20 Nay but O man, who art thou that repliest against God? Shall the thing formed say to him that formed it, Why hast thou made me thus?

21 Hath not the potter power ouer the clay, of the same lumpe, to make one vessell vnto honour, and another vnto dishonour?

22 What if God, willing to shew his wrath, & to make his power knowen, indured with much long suffering the vessels of wrath fitted to destruction:

23 And that he might make knowen the riches of his glory on the vessels of mercy, which hee had afore prepared vnto glorie?

24 Euen vs whom hee hath called, not of the Iewes onely, but also of the Gentiles.

25 As he saith also in Osee, I will call them my people, which were not my people: and her, beloued, which was not beloued.

26 And it shall come to passe, that in the place where it was saide vnto them, Ye are not my people, there shall they bee called the children of the liuing God.

27 Esaias also crieth concerning Israel, Though the number of the children of Israel be as the sand of the sea, a remnant shalbe saued.

28 For he will finish the worke, and cut it short in righteousnesse: because a short worke will the Lord make vpon the earth.

29 And as Esaias said before, Except the Lord of Sabboth had left vs a seed, we had bene as Sodoma, and bene made like vnto Gomorrha.

32 Wherefore? because they sought it, not by faith, but as it were by the works of the Law: for they stumbled at that stumbling stone,

33 As it is written, Beholde, I lay in Sion a stumbling stone, and rocke of offence: and whosoeuer beleeueth on him, shall not be ashamed.

The apostle's concern that his countrymen were strangers to the gospel. (1-5) The promises are made good to the spiritual seed of Abraham. (6-13) Answers to objections against God's sovereign conduct, in exercising mercy and justice. (14-24) This sovereignty is in God's dealing both with Jews and Gentiles. (25-29) The falling short of the Jews is owing to their seeking justification, not by faith, but by the works of the law. (30-33)1-5 Being about to discuss the rejection of the Jews and the calling of the Gentiles, and to show that the whole agrees with the sovereign electing love of God, the apostle expresses strongly his affection for his people. He solemnly appeals to Christ; and his conscience, enlightened and directed by the Holy Spirit, bore witness to his sincerity. He would submit to be treated as "accursed," to be disgraced, crucified; and even for a time be in the deepest horror and distress; if he could rescue his nation from the destruction about to come upon them for their obstinate unbelief. To be insensible to the eternal condition of our fellow-creatures, is contrary both to the love required by the law, and the mercy of the gospel. They had long been professed worshippers of Jehovah. The law, and the national covenant which was grounded thereon, belonged to them. The temple worship was typical of salvation by the Messiah, and the means of communion with God. All the promises concerning Christ and his salvation were given to them. He is not only over all, as Mediator, but he is God blessed for ever.

6-13 The rejection of the Jews by the gospel dispensation, did not break God's promise to the patriarchs. The promises and threatenings shall be fulfilled. Grace does not run in the blood; nor are saving benefits always found with outward church privileges. Not only some of Abraham's seed were chosen, and others not, but God therein wrought according to the counsel of his own will. God foresaw both Esau and Jacob as born in sin, by nature children of wrath even as others. If left to themselves they would have continued in sin through life; but for wise and holy reasons, not made known to us, he purposed to change Jacob's heart, and to leave Esau to his perverseness. This instance of Esau and Jacob throws light upon the Divine conduct to the fallen race of man. The whole Scripture shows the difference between the professed Christian and the real believer. Outward privileges are bestowed on many who are not the children of God. There is, however, full encouragement to diligent use of the means of grace which God has appointed.

14-24 Whatever God does, must be just. Wherein the holy, happy people of God differ from others, God's grace alone makes them differ. In this preventing, effectual, distinguishing grace, he acts as a benefactor, whose grace is his own. None have deserved it; so that those who are saved, must thank God only; and those who perish, must blame themselves only, #Hos 13:9|. God is bound no further than he has been pleased to bind himself by his own covenant and promise, which is his revealed will. And this is, that he will receive, and not cast out, those that come to Christ; but the drawing of souls in order to that coming, is an anticipating, distinguishing favour to whom he will. Why does he yet find fault? This is not an objection to be made by the creature against his Creator, by man against God. The truth, as it is in Jesus, abases man as nothing, as less than nothing, and advances God as sovereign Lord of all. Who art thou that art so foolish, so feeble, so unable to judge the Divine counsels? It becomes us to submit to him, not to reply against him. Would not men allow the infinite God the same sovereign right to manage the affairs of the creation, as the potter exercises in disposing of his clay, when of the same lump he makes one vessel to a more honourable, and one to a meaner use? God could do no wrong, however it might appear to men. God will make it appear that he hates sin. Also, he formed vessels filled with mercy. Sanctification is the preparation of the soul for glory. This is God's work. Sinners fit themselves for hell, but it is God who prepares saints for heaven; and all whom God designs for heaven hereafter, he fits for heaven now. Would we know who these vessels of mercy are? Those whom God has called; and these not of the Jews only, but of the Gentiles. Surely there can be no unrighteousness in any of these Divine dispensations. Nor in God's exercising long-suffering, patience, and forbearance towards sinners under increasing guilt, before he brings utter destruction upon them. The fault is in the hardened sinner himself. As to all who love and fear God, however such truths appear beyond their reason to fathom, yet they should keep silence before him. It is the Lord alone who made us to differ; we should adore his pardoning mercy and new-creating grace, and give diligence to make our calling and election sure.

25-29 The rejecting of the Jews, and the taking in the Gentiles, were foretold in the Old Testament. It tends very much to the clearing of a truth, to observe how the Scripture is fulfilled in it. It is a wonder of Divine power and mercy that there are any saved: for even those left to be a seed, if God had dealt with them according to their sins, had perished with the rest. This great truth this Scripture teaches us. Even among the vast number of professing Christians it is to be feared that only a remnant will be saved.

30-33 The Gentiles knew not their guilt and misery, therefore were not careful to procure a remedy. Yet they attained to righteousness by faith. Not by becoming proselytes to the Jewish religion, and submitting to the ceremonial law; but by embracing Christ, and believing in him, and submitting to the gospel. The Jews talked much of justification and holiness, and seemed very ambitious to be the favourites of God. They sought, but not in the right way, not in the humbling way, not in the appointed way. Not by faith, not by embracing Christ, depending upon Christ, and submitting to the gospel. They expected justification by observing the precepts and ceremonies of the law of Moses. The unbelieving Jews had a fair offer of righteousness, life, and salvation, made them upon gospel terms, which they did not like, and would not accept. Have we sought to know how we may be justified before God, seeking that blessing in the way here pointed out, by faith in Christ, as the Lord our Righteousness? Then we shall not be ashamed in that awful day, when all refuges of lies shall be swept away, and the Divine wrath shall overflow every hiding-place but that which God hath prepared in his own Son.

View All Discussusion for Romans Chapter 9... 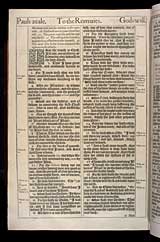