1 Therefore being iustified by faith, wee haue peace with God, through our Lord Iesus Christ.

2 By whom also wee haue accesse by faith, into this grace wherein wee stand, and reioyce in hope of the glory of God.

3 And not onely so, but we glory in tribulations also, knowing that tribulation worketh patience:

4 And patience, experience: and experience, hope:

5 And hope maketh not ashamed, because the loue of God is shed abroad in our hearts, by the holy Ghost, which is giuen vnto vs.

6 For when wee were yet without strength, in due time, Christ died for the vngodly.

7 For scarcely for a righteous man will one die: yet peraduenture for a good man, some would euen dare to dye.

8 But God commendeth his loue towards vs, in that, while we were yet sinners, Christ died for vs.

9 Much more then being now iustified by his blood, we shalbe saued from wrath through him.

10 For if when wee were enemies, we were reconciled to God, by the death of his sonne: much more being reconciled, we shalbe saued by his life.

11 And not onely so, but wee also ioy in God, through our Lorde Iesus Christ, by whom we haue now receiued the atonement.

12 Wherefore, as by one man sinne entred into the world, and death by sin: and so death passed vpon all men, for that all haue sinned.

13 For vntill the Law sinne was in the world: but sin is not imputed when there is no Law.

14 Neuertheles, death reigned from Adam to Moses, euen ouer them that had not sinned after the similitude of Adams transgression, who is the figure of him that was to come:

15 But not as the offence, so also is the free gift: for if through the offence of one, many bee dead: much more the grace of God, and the gift by grace, which is by one man Iesus Christ, hath abounded vnto many.

16 And not as it was by one that sinned, so is the gift: for the iudgement was by one to condemnation: but the free gift is of many offences vnto iustification.

17 For if by one mans offence, death raigned by one, much more they which receiue abundance of grace and of the gift of righteousnes, shall reigne in life by one, Iesus Christ.

19 For as by one mans disobedience many were made sinners: so by the obedience of one, shall many bee made righteous.

20 Moreouer, the Lawe entred, that the offence might abound: but where sinne abounded, grace did much more abound.

The happy effects of justification through faith in the righteousness of Christ. (1-5) That we are reconciled by his blood. (6-11) The fall of Adam brought all mankind into sin and death. (12-14) The grace of God, through the righteousness of Christ, has more power to bring salvation, than Adam's sin had to bring misery, (15-19) as grace did superabound. (20,21)1-5 A blessed change takes place in the sinner's state, when he becomes a true believer, whatever he has been. Being justified by faith he has peace with God. The holy, righteous God, cannot be at peace with a sinner, while under the guilt of sin. Justification takes away the guilt, and so makes way for peace. This is through our Lord Jesus Christ; through him as the great Peace-maker, the Mediator between God and man. The saints' happy state is a state of grace. Into this grace we are brought, which teaches that we were not born in this state. We could not have got into it of ourselves, but we are led into it, as pardoned offenders. Therein we stand, a posture that denotes perseverance; we stand firm and safe, upheld by the power of the enemy. And those who have hope for the glory of God hereafter, have enough to rejoice in now. Tribulation worketh patience, not in and of itself, but the powerful grace of God working in and with the tribulation. Patient sufferers have most of the Divine consolations, which abound as afflictions abound. It works needful experience of ourselves. This hope will not disappoint, because it is sealed with the Holy Spirit as a Spirit of love. It is the gracious work of the blessed Spirit to shed abroad the love of God in the hearts of all the saints. A right sense of God's love to us, will make us not ashamed, either of our hope, or of our sufferings for him.

6-11 Christ died for sinners; not only such as were useless, but such as were guilty and hateful; such that their everlasting destruction would be to the glory of God's justice. Christ died to save us, not in our sins, but from our sins; and we were yet sinners when he died for us. Nay, the carnal mind is not only an enemy to God, but enmity itself, chap. #8:7; Col 1:21|. But God designed to deliver from sin, and to work a great change. While the sinful state continues, God loathes the sinner, and the sinner loathes God, #Zec 11:8|. And that for such as these Christ should die, is a mystery; no other such an instance of love is known, so that it may well be the employment of eternity to adore and wonder at it. Again; what idea had the apostle when he supposed the case of some one dying for a righteous man? And yet he only put it as a thing that might be. Was it not the undergoing this suffering, that the person intended to be benefitted might be released therefrom? But from what are believers in Christ released by his death? Not from bodily death; for that they all do and must endure. The evil, from which the deliverance could be effected only in this astonishing manner, must be more dreadful than natural death. There is no evil, to which the argument can be applied, except that which the apostle actually affirms, sin, and wrath, the punishment of sin, determined by the unerring justice of God. And if, by Divine grace, they were thus brought to repent, and to believe in Christ, and thus were justified by the price of his bloodshedding, and by faith in that atonement, much more through Him who died for them and rose again, would they be kept from falling under the power of sin and Satan, or departing finally from him. The living Lord of all, will complete the purpose of his dying love, by saving all true believers to the uttermost. Having such a pledge of salvation in the love of God through Christ, the apostle declared that believers not only rejoiced in the hope of heaven, and even in their tribulations for Christ's sake, but they gloried in God also, as their unchangeable Friend and all-sufficient Portion, through Christ only.

12-14 The design of what follows is plain. It is to exalt our views respecting the blessings Christ has procured for us, by comparing them with the evil which followed upon the fall of our first father; and by showing that these blessings not only extend to the removal of these evils, but far beyond. Adam sinning, his nature became guilty and corrupted, and so came to his children. Thus in him all have sinned. And death is by sin; for death is the wages of sin. Then entered all that misery which is the due desert of sin; temporal, spiritual, eternal death. If Adam had not sinned, he had not died; but a sentence of death was passed, as upon a criminal; it passed through all men, as an infectious disease that none escape. In proof of our union with Adam, and our part in his first transgression, observe, that sin prevailed in the world, for many ages before the giving of the law by Moses. And death reigned in that long time, not only over adults who wilfully sinned, but also over multitudes of infants, which shows that they had fallen in Adam under condemnation, and that the sin of Adam extended to all his posterity. He was a figure or type of Him that was to come as Surety of a new covenant, for all who are related to Him.

15-19 Through one man's offence, all mankind are exposed to eternal condemnation. But the grace and mercy of God, and the free gift of righteousness and salvation, are through Jesus Christ, as man: yet the Lord from heaven has brought the multitude of believers into a more safe and exalted state than that from which they fell in Adam. This free gift did not place them anew in a state of trial, but fixed them in a state of justification, as Adam would have been placed, had he stood. Notwithstanding the differences, there is a striking similarity. As by the offence of one, sin and death prevailed to the condemnation of all men, so by the righteousness of one, grace prevailed to the justification of all related to Christ by faith. Through the grace of God, the gift by grace has abounded to many through Christ; yet multitudes choose to remain under the dominion of sin and death, rather than to apply for the blessings of the reign of grace. But Christ will in nowise cast out any who are willing to come to him.

20,21 By Christ and his righteousness, we have more and greater privileges than we lost by the offence of Adam. The moral law showed that many thoughts, tempers, words, and actions, were sinful, thus transgressions were multiplied. Not making sin to abound the more, but discovering the sinfulness of it, even as the letting in a clearer light into a room, discovers the dust and filth which were there before, but were not seen. The sin of Adam, and the effect of corruption in us, are the abounding of that offence which appeared on the entrance of the law. And the terrors of the law make gospel comforts the more sweet. Thus God the Holy Spirit has, by the blessed apostle, delivered to us a most important truth, full of consolation, suited to our need as sinners. Whatever one may have above another, every man is a sinner against God, stands condemned by the law, and needs pardon. A righteousness that is to justify cannot be made up of a mixture of sin and holiness. There can be no title to an eternal reward without a pure and spotless righteousness: let us look for it, even to the righteousness of Christ.

View All Discussusion for Romans Chapter 5... 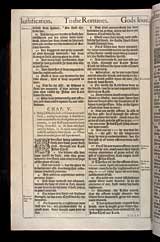