1 What shall we say then, that Abraham our father, as perteining to the flesh, hath found?

2 For if Abraham were iustified by workes, hee hath whereof to glory, but not before God.

3 For what saith the Scripture? Abraham beleeued God, and it was counted vnto him for righteousnes.

4 Now to him that worketh, is the reward not reckoned of grace, but of debt.

5 But to him that worketh not, but beleeueth on him that iustifieth the vngodly; his faith is counted for righteousnesse.

6 Euen as Dauid also describeth the blessednesse of the man, vnto whom God imputeth righteousnesse without works:

7 Saying, Blessed are they whose iniquities are forgiuen, and whose sinnes are couered.

8 Blessed is the man to whome the Lord will not impute sinne.

9 Commeth this blessednes then vpon the circumcision onely, or vpon the vncircumcision also? for wee say that faith was reckoned to Abraham for righteousnesse.

11 And hee receiued the signe of circumcision, a seale of the righteousnesse of the faith, which hee had yet being vncircumcised: that he might be the father of all them that beleeue, though they be not circumcised; that righteousnesse might be imputed vnto them also:

12 And the father of circumcision, to them who are not of the circumcision onely, but also walke in the steppes of that faith of our father Abraham, which he had being yet vncircumcised.

13 For the promise that he should be the heire of the world, was not to Abraham, or to his seed through the Lawe, but through the righteousnesse of faith.

14 For if they which are of the law be heires, faith is made voide, and the promise made of none effect.

15 Because the law worketh wrath: for where no Lawe is, there is no transgression.

16 Therefore it is of faith, that it might bee by grace; to the ende the promise might be sure to all the seede, not to that onely which is of the Law, but to that also which is of the faith of Abraham, who is the father of vs all,

17 (As it is written, I haue made thee a father of many nations) before him whom he beleeued, euen God who quickeneth the dead, and calleth those things which bee not, as though they were,

18 Who against hope, beleeued in hope, that hee might become the father of many nations: according to that which was spoken, So shall thy seede bee.

19 And being not weake in faith, hee considered not his owne body now dead, when hee was about an hundred yere old, neither yet the deadnes of Saraes wombe.

20 Hee staggered not at the promise of God through vnbeliefe: but was strong in faith, giuing glory to God:

21 And being fully perswaded, that what he had promised, he was able also to performe.

22 And therefore it was imputed to him for righteousnesse.

23 Now it was not written for his sake alone, that it was imputed to him:

24 But for vs also, to whome it shall bee imputed, if wee beleeue on him that raised vp Iesus our Lord from the dead,

25 Who was deliuered for our offences, and was raised againe for our iustification.

The doctrine of justification by faith is shown by the case of Abraham. (1-12) He received the promise through the righteousness of faith. (13-22) And we are justified in the same way of believing. (23-25)1-12 To meet the views of the Jews, the apostle first refers to the example of Abraham, in whom the Jews gloried as their most renowned forefather. However exalted in various respects, he had nothing to boast in the presence of God, being saved by grace, through faith, even as others. Without noticing the years which passed before his call, and the failures at times in his obedience, and even in his faith, it was expressly stated in Scripture that "he believed God, and it was counted to him for righteousness," #Ge 15:6|. From this example it is observed, that if any man could work the full measure required by the law, the reward must be reckoned as a debt, which evidently was not the case even of Abraham, seeing faith was reckoned to him for righteousness. When believers are justified by faith, "their faith being counted for righteousness," their faith does not justify them as a part, small or great, of their righteousness; but as the appointed means of uniting them to Him who has chosen as the name whereby he shall be called, "the Lord our Righteousness." Pardoned people are the only blessed people. It clearly appears from the Scripture, that Abraham was justified several years before his circumcision. It is, therefore, plain that this rite was not necessary in order to justification. It was a sign of the original corruption of human nature. And it was such a sign as was also an outward seal, appointed not only to confirm God's promises to him and to his seed, and their obligation to be the Lord's, but likewise to assure him of his being already a real partaker of the righteousness of faith. Thus Abraham was the spiritual forefather of all believers, who walked after the example of his obedient faith. The seal of the Holy Spirit in our sanctification, making us new creatures, is the inward evidence of the righteousness of faith.

13-22 The promise was made to Abraham long before the law. It points at Christ, and it refers to the promise, #Ge 12:3|. In Thee shall all families of the earth be blessed. The law worketh wrath, by showing that every transgressor is exposed to the Divine displeasure. As God intended to give men a title to the promised blessings, so he appointed it to be by faith, that it might be wholly of grace, to make it sure to all who were of the like precious faith with Abraham, whether Jews or Gentiles, in all ages. The justification and salvation of sinners, the taking to himself the Gentiles who had not been a people, were a gracious calling of things which are not, as though they were; and this giving a being to things that were not, proves the almighty power of God. The nature and power of Abraham's faith are shown. He believed God's testimony, and looked for the performance of his promise, firmly hoping when the case seemed hopeless. It is weakness of faith, that makes a man lie poring on the difficulties in the way of a promise. Abraham took it not for a point that would admit of argument or debate. Unbelief is at the bottom of all our staggerings at God's promises. The strength of faith appeared in its victory over fears. God honours faith; and great faith honours God. It was imputed to him for righteousness. Faith is a grace that of all others gives glory to God. Faith clearly is the instrument by which we receive the righteousness of God, the redemption which is by Christ; and that which is the instrument whereby we take or receive it, cannot be the thing itself, nor can it be the gift thereby taken and received. Abraham's faith did not justify him by its own merit or value, but as giving him a part in Christ.

23-25 The history of Abraham, and of his justification, was recorded to teach men of after-ages; those especially to whom the gospel was then made known. It is plain, that we are not justified by the merit of our own works, but by faith in Jesus Christ and his righteousness; which is the truth urged in this and the foregoing chapter, as the great spring and foundation of all comfort. Christ did meritoriously work our justification and salvation by his death and passion, but the power and perfection thereof, with respect to us, depend on his resurrection. By his death he paid our debt, in his resurrection he received our acquittance, #Isa 53:8|. When he was discharged, we, in Him and together with Him, received the discharge from the guilt and punishment of all our sins. This last verse is an abridgement or summary of the whole gospel.

View All Discussusion for Romans Chapter 4... 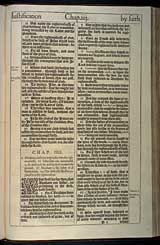