1 Paul a seruant of Iesus Christ, called to bee an Apostle, separated vnto the Gospel of God,

2 (Which he had promised afore by his Prophets in the holy Scriptures,)

3 Concerning his Sonne Iesus Christ our Lord, which was made of the seed of Dauid according to the flesh,

4 And declared to be the Sonne of God, with power, according to the Spirit of holinesse, by the resurrection from the dead.

5 By whom we haue receiued grace and Apostleship for obedience to the faith among all nations for his Name,

6 Among whom are ye also the called of Iesus Christ.

7 To all that be in Rome, beloued of God, called to be Saints: Grace to you and peace from God our Father, and the Lord Iesus Christ.

8 First I thanke my God through Iesus Christ for you all, that your faith is spoken of throughout the whole world.

9 For God is my witnesse, whom I serue with my spirit in the Gospel of his Sonne, that without ceasing I make mention of you, alwayes in my prayers,

10 Making request, (if by any meanes now at length I might haue a prosperous iourney by the will of God) to come vnto you.

11 For I long to see you, that I may impart vnto you some spirituall gift, to the end you may be established,

12 That is, that I may be comforted together with you, by the mutual faith both of you and me.

13 Now I would not haue you ignorant, brethren, that oftentimes I purposed to come vnto you, (but was let hitherto) that I might haue some fruit among you also, euen as among other Gentiles.

15 So, as much as in mee is, I am ready to preach the Gospel to you that are at Rome also.

16 For I am not ashamed of the Gopel of Christ: for it is the power of God vnto saluation, to euery one that beleeueth, to the Iew first, and also to the Greeke.

17 For therein is the righteousnesse of God reueiled from faith to faith: as it is written, The iust shall liue by faith.

19 Because that which may bee knowen of God, is manifest in them, for God hath shewed it vnto them.

20 For the inuisible things of him from the Creation of the world, are clearely seene, being vnderstood by the things that are made, euen his eternall Power and Godhead, so that they are without excuse:

21 Because that when they knew God, they glorified him not as God, neither were thankefull, but became vaine in their imaginations, and their foolish heart was darkened:

22 Professing themselues to be wise, they became fooles:

23 And changed the glory of the vncorruptible God, into an image made like to corruptible man, and to birdes, and foure footed beasts, and creeping things:

24 Wherefore God also gaue them vp to vncleannesse, through the lusts of their owne hearts, to dishonour their owne bodies betweene themselues:

25 Who changed the trueth of God into a lye, and worshipped and serued the creature more then the Creatour, who is blessed for euer. Amen.

26 For this cause God gaue them vp vnto vile affections: for euen their women did change the naturall vse into that which is against nature:

27 And likewise also the men, leauing the naturall vse of the woman, burned in their lust one towards another, men with men working that which is vnseemely, and receiuing in themselues that recompense of their errour which was meet.

28 And euen as they did not like to retaine God in their knowledge, God gaue them ouer to a reprobate minde, to doe those things which are not conuenient:

32 Who knowing the iudgement of God, (that they which commit such things, are worthy of death) not onely do the same, but haue pleasure in them that doe them.

The scope or design of the apostle in writing to the Romans appears to have been, to answer the unbelieving, and to teach the believing Jew; to confirm the Christian and to convert the idolatrous Gentile; and to show the Gentile convert as equal with the Jewish, in respect of his religious condition, and his rank in the Divine favour. These several designs are brought into on view, by opposing or arguing with the infidel or unbelieving Jew, in favour of the Christian or believing Gentile. The way of a sinner's acceptance with God, or justification in his sight, merely by grace, through faith in the righteousness of Christ, without distinction of nations, is plainly stated. This doctrine is cleared from the objections raised by Judaizing Christians, who were for making terms of acceptance with God by a mixture of the law and the gospel, and for shutting out the Gentiles from any share in the blessings of salvation brought in by the Messiah. In the conclusion, holiness is further enforced by practical exhortations.The apostle's commission. (1-7) Prays for the saints at Rome, and expresses his desire to see them. (8-15) The gospel way of justification by faith, for Jews and Gentiles. (16,17) The sins of the Gentiles set forth. (18-32)1-7 The doctrine of which the apostle Paul wrote, set forth the fulfilment of the promises by the prophets. It spoke of the Son of God, even Jesus the Saviour, the promised Messiah, who came from David as to his human nature, but was also declared to be the Son of God, by the Divine power which raised him from the dead. The Christian profession does not consist in a notional knowledge or a bare assent, much less in perverse disputings, but in obedience. And all those, and those only, are brought to obedience of the faith, who are effectually called of Jesus Christ. Here is, 1. The privilege of Christians; they are beloved of God, and are members of that body which is beloved. 2. The duty of Christians; to be holy, hereunto are they called, called to be saints. These the apostle saluted, by wishing them grace to sanctify their souls, and peace to comfort their hearts, as springing from the free mercy of God, the reconciled Father of all believers, and coming to them through the Lord Jesus Christ.

8-15 We must show love for our friends, not only by praying for them, but by praising God for them. As in our purposes, so in our desires, we must remember to say, If the Lord will, #Jas 4:15|. Our journeys are made prosperous or otherwise, according to the will of God. We should readily impart to others what God has trusted to us, rejoicing to make others joyful, especially taking pleasure in communing with those who believe the same things with us. If redeemed by the blood, and converted by the grace of the Lord Jesus, we are altogether his; and for his sake we are debtors to all men, to do all the good we can. Such services are our duty.

16,17 In these verses the apostle opens the design of the whole epistle, in which he brings forward a charge of sinfulness against all flesh; declares the only method of deliverance from condemnation, by faith in the mercy of God, through Jesus Christ; and then builds upon it purity of heart, grateful obedience, and earnest desires to improve in all those Christian graces and tempers, which nothing but a lively faith in Christ can bring forth. God is a just and holy God, and we are guilty sinners. It is necessary that we have a righteousness to appear in before him: there is such a righteousness brought in by the Messiah, and made known in the gospel; a gracious method of acceptance, notwithstanding the guilt of our sins. It is the righteousness of Christ, who is God, coming from a satisfaction of infinite value. Faith is all in all, both in the beginning and progress of Christian life. It is not from faith to works, as if faith put us into a justified state, and then works kept us in it; but it is all along from faith to faith; it is faith pressing forward, and gaining the victory over unbelief.

18-25 The apostle begins to show that all mankind need the salvation of the gospel, because none could obtain the favour of God, or escape his wrath by their own works. For no man can plead that he has fulfilled all his obligations to God and to his neighbour; nor can any truly say that he has fully acted up to the light afforded him. The sinfulness of man is described as ungodliness against the laws of the first table, and unrighteousness against those of the second. The cause of that sinfulness is holding the truth in unrighteousness. All, more or less, do what they know to be wrong, and omit what they know to be right, so that the plea of ignorance cannot be allowed from any. Our Creator's invisible power and Godhead are so clearly shown in the works he has made, that even idolaters and wicked Gentiles are left without excuse. They foolishly followed idolatry; and rational creatures changed the worship of the glorious Creator, for that of brutes, reptiles, and senseless images. They wandered from God, till all traces of true religion must have been lost, had not the revelation of the gospel prevented it. For whatever may be pretended, as to the sufficiency of man's reason to discover Divine truth and moral obligation, or to govern the practice aright, facts cannot be denied. And these plainly show that men have dishonoured God by the most absurd idolatries and superstitions; and have degraded themselves by the vilest affections and most abominable deeds.

26-32 In the horrid depravity of the heathen, the truth of our Lord's words was shown: "Light was come into the world, but men loved darkness rather than light, because their deeds were evil; for he that doeth evil hateth the light." The truth was not to their taste. And we all know how soon a man will contrive, against the strongest evidence, to reason himself out of the belief of what he dislikes. But a man cannot be brought to greater slavery than to be given up to his own lusts. As the Gentiles did not like to keep God in their knowledge, they committed crimes wholly against reason and their own welfare. The nature of man, whether pagan or Christian, is still the same; and the charges of the apostle apply more or less to the state and character of men at all times, till they are brought to full submission to the faith of Christ, and renewed by Divine power. There never yet was a man, who had not reason to lament his strong corruptions, and his secret dislike to the will of God. Therefore this chapter is a call to self-examination, the end of which should be, a deep conviction of sin, and of the necessity of deliverance from a state of condemnation.

View All Discussusion for Romans Chapter 1... 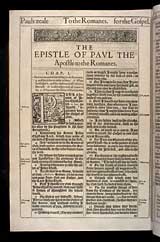