1 And I sawe when the Lambe opened one of the seales, and I heard as it were the noise of thunder, one of the foure beastes, saying, Come and see.

2 And I saw, and behold, a white horse, and hee that sate on him had a bowe, and a crowne was giuen vnto him, and hee went foorth conquering, and to conquere.

4 And there went out another horse that was red: and power was giuen to him that sate thereon to take peace from the earth, and that they should kill one another: and there was giuen vnto him a great sword.

5 And when hee had opened the third seale, I heard the third beast say, Come and see. And I beheld, and loe, a blacke horse: and hee that sate on him had a paire of balances in his hand.

7 And when hee had opened the fourth seale, I heard the voice of the fourth beast say, Come and see.

8 And I looked, and behold, a pale horse, & his name that sate on him was Death, and hell followed with him: and power was giuen vnto them, ouer the fourth part of the earth to kill with sword, & with hunger, and with death, and with the beastes of the earth.

9 And when hee had opened the fift seale, I saw vnder the altar, the soules of them that were slaine for the word of God, and for the testimony which they held.

10 And they cried with a lowd voice, saying, How long, O Lord, holy and true, doest thou not iudge and auenge our blood on them that dwell on the earth?

11 And white robes were giuen vnto euery one of them, and it was sayd vnto them, that they should rest yet for a little season, vntill their fellow seruants also, and their brethren that should be killed as they were, should be fulfilled.

12 And I beheld when he had opened the sixt seale, and loe, there was a great earthquake, and the Sunne became blacke as sackecloth of haire, and the Moone became as blood.

13 And the starres of heauen fell vnto the earth, euen as a figge tree casteth her vntimely figs when she is shaken of a mighty winde.

14 And the heauen departed as a scrowle when it is rolled together, and euery mountaine and Island were moued out of their places.

15 And the kings of the earth, and the great men, and the rich men, and the chiefe captaines, and the mighty men, and euery bondman, and euery free man, hid themselues in the dennes, and in the rockes of the mountaines,

16 And said to the mountaines and rockes, Fall on vs, and hide vs from the face of him that sitteth on the throne, and from the wrath of the Lambe:

17 For the great day of his wrath is come, and who shall be able to stand?

The opening of the seals, The first, second, third, and fourth. (1-8) The fifth. (9-11) The sixth. (12-17)1-8 Christ, the Lamb, opens the first seal: observe what appeared. A rider on a white horse. By the going forth of this white horse, a time of peace, or the early progress of the Christian religion, seems to be intended; its going forth in purity, at the time when its heavenly Founder sent his apostles to teach all nations, adding, Lo! I am with you alway, even to the end of the world. The Divine religion goes out crowned, having the Divine favour resting upon it, armed spiritually against its foes, and destined to be victorious in the end. On opening the second seal, a red horse appeared; this signifies desolating judgments. The sword of war and persecution is a dreadful judgment; it takes away peace from the earth, one of the greatest blessings; and men who should love one another, and help one another, are set upon killing one another. Such scenes also followed the pure age of early Christianity, when, neglectful of charity and the bond of peace, the Christian leaders, divided among themselves, appealed to the sword, and entangled themselves in guilt. On opening the third seal, a black horse appeared; a colour denoting mourning and woe, darkness and ignorance. He that sat on it had a yoke in his hand. Attempts were made to put a yoke of superstitious observances on the disciples. As the stream of Christianity flowed further from its pure fountain, it became more and more corrupt. During the progress of this black horse, the necessaries of life should be at excessive prices, and the more costly things should not be hurt. According to prophetic language, these articles signified that food of religious knowledge, by which the souls of men are sustained unto everlasting life; such we are invited to buy, #Isa 55:1|. But when the dark clouds of ignorance and superstition, denoted by the black horse, spread over the Christian world, the knowledge and practice of true religion became scarce. When a people loathe their spiritual food, God may justly deprive them of their daily bread. The famine of bread is a terrible judgment; but the famine of the word is more so. Upon opening the fourth seal, another horse appeared, of a pale colour. The rider was Death, the king of terrors. The attendants, or followers of this king of terrors, hell, a state of eternal misery to all who die in their sins; and in times of general destruction, multitudes go down unprepared into the pit. The period of the fourth seal is one of great slaughter and devastation, destroying whatever may tend to make life happy, making ravages on the spiritual lives of men. Thus the mystery of iniquity was completed, and its power extended both over the lives and consciences of men. The exact times of these four seals cannot be ascertained, for the changes were gradual. God gave them power, that is, those instruments of his anger, or those judgments: all public calamities are at his command; they only go forth when God sends them, and no further than he permits.

9-11 The sight the apostle beheld at the opening the fifth seal was very affecting. He saw the souls of the martyrs under the altar; at the foot of the altar in heaven, at the feet of Christ. Persecutors can only kill the body; after that there is no more they can do; the soul lives. God has provided a good place in the better world, for those who are faithful unto death. It is not their own death, but the sacrifice of Christ, that gives them entrance into heaven. The cause in which they suffered, was for the word of God; the best any man can lay down his life for; faith in God's word, and the unshaken confession of that faith. They commit their cause to Him to whom vengeance belongs. The Lord is the comforter of his afflicted servants, and precious is their blood in his sight. As the measure of the sin of persecutors is filling up, so is the number of the persecuted, martyred servants of Christ. When this is fulfilled, God will send tribulation to those who trouble them, and unbroken happiness and rest to those that are troubled.

12-17 When the sixth seal was opened, there was a great earthquake. The foundations of churches and states would be terribly shaken. Such bold figurative descriptions of great changes abound in the prophecies of Scripture; for these events are emblems, and declare the end of the world and the day of judgment. Dread and terror would seize on all sorts of men. Neither grandeur, riches, valour, nor strength, can support men at that time. They would be glad to be no more seen; yea, to have no longer any being. Though Christ be a Lamb, he can be angry, and the wrath of the Lamb is exceedingly dreadful; for if the Redeemer himself, who appeases the wrath of God, be our enemy, where shall we find a friend to plead for us? As men have their day of opportunity, and their seasons of grace, so God has his day of righteous wrath. It seems that the overthrow of the paganism of the Roman empire is here meant. The idolaters are described as hiding themselves in their dens and secret caves, and vainly seeking to escape ruin. In such a day, when the signs of the times show those who believe in God's word, that the King of kings is approaching, Christians are called to a decided course, and to a bold confession of Christ and his truth before their fellowmen. Whatever they may have to endure, the short contempt of man is to be borne, rather than that shame which is everlasting.

View All Discussusion for Revelation Chapter 6... 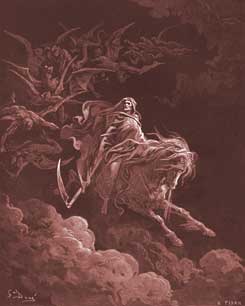 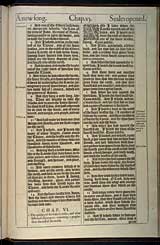