1 And I saw in þe right hand of him that sate on the Throne, a booke written within, & on the backeside, sealed with seuen seales.

2 And I saw a strong Angel proclaiming with a loude voice; Who is worthy to open the booke, and to loose the seales thereof?

3 And no man in heauen, nor in earth, neither vnder the earth, was able to open the booke, neither to looke thereon.

4 And I wept much, because no man was found worthy to open, and to reade the booke, neither to looke thereon.

5 And one of the Elders saith vnto me, Weepe not: beholde, the Lion of the tribe of Iuda, the roote of Dauid, hath preuailed to open the booke, and to loose the seuen seales thereof.

6 And I beheld, and loe, in the middest of the Throne, and of the foure beastes, and in the midst of the Elders stood a Lambe as it had beene slaine, hauing seuen hornes and seuen eyes, which are the seuen Spirits of God, sent foorth into all the earth.

7 And he came, and tooke the booke out of the right hand of him that sate vpon the Throne.

8 And when he had taken the booke, the foure Beasts, and foure and twenty Elders fel down before the Lambe, hauing euery one of them harps, and golden vials full of odours, which are the prayers of Saints.

9 And they sung a new song, saying, Thou art worthy to take the Booke, and to open the seales thereof: for thou wast slaine, and hast redeemed vs to God by thy blood, out of euery kinred, and tongue, and people, and nation:

10 And hast made vs vnto our God Kings and Priests, and we shall reigne on the earth.

11 And I beheld, and I heard the voyce of many Angels, round about the Throne, and the beasts and the Elders, and the number of them was ten thousand times tenne thousand, and thousands of thousands,

12 Saying with a lowd voice, Worthy is the Lambe that was slaine, to receiue power, and riches, and wisedome, and strength, and honour, and glory, and blessing.

13 And euery creature which is in heauen, and on the earth, and vnder the earth, and such as are in the sea, and all that are in them, heard I, saying, Blessing, honour, glory, and power bee vnto him that sitteth vpon the Throne, and vnto the Lambe for euer and euer.

A book sealed with seven seals, which could be opened by none but Christ, who took the book to open it. (1-7) Upon which all honour is ascribed to him, as worthy to open it. (8-14)1-7 The apostle saw in the hand of Him that sat upon the throne, a roll of parchments in the form usual in those times, and sealed with seven seals. This represented the secret purposes of God about to be revealed. The designs and methods of Divine Providence, toward the church and the world, are stated, fixed, and made a matter of record. The counsels of God are altogether hidden from the eye and understanding of the creature. The several parts are not unsealed and opened at once, but after each other, till the whole mystery of God's counsel and conduct is finished in the world. The creatures cannot open it, nor read it; the Lord only can do so. Those who see most of God, are most desirous to see more; and those who have seen his glory, desire to know his will. But even good men may be too eager and hasty to look into the mysteries of the Divine conduct. Such desires, if not soon answered, turn to grief and sorrow. If John wept much because he could not look into the book of God's decrees, what reason have many to shed floods of tears for their ignorance of the gospel of Christ! of that on which everlasting salvation depends! We need not weep that we cannot foresee future events respecting ourselves in this world; the eager expectation of future prospects, or the foresight of future calamities, would alike unfit us for present duties and conflicts, or render our prosperous days distressing. Yet we may desire to learn, from the promises and prophecies of Scripture, what will be the final event to believers and to the church; and the Incarnate Son has prevailed, that we should learn all that we need to know. Christ stands as Mediator between God and both ministers and people. He is called a Lion, but he appears as a Lamb slain. He appears with the marks of his sufferings, to show that he pleads for us in heaven, in virtue of his satisfaction. He appears as a Lamb, having seven horns and seven eyes; perfect power to execute all the will of God, and perfect wisdom to understand it, and to do it in the most effectual manner. The Father put the book of his eternal counsels into the hand of Christ, and Christ readily and gladly took it into his hand; for he delights to make known the will of his Father; and the Holy Spirit is given by him to reveal the truth and will of God.

8-14 It is matter of joy to all the world, to see that God deals with men in grace and mercy through the Redeemer. He governs the world, not merely as a Creator, but as our Saviour. The harps were instruments of praise; the vials were full of odours, or incense, which signify the prayers of the saints: prayer and praise should always go together. Christ has redeemed his people from the bondage of sin, guilt, and Satan. He has not only purchased liberty for them, but the highest honour and preferment; he made them kings and priests; kings, to rule over their own spirits, and to overcome the world, and the evil one; and he makes them priests; giving them access to himself, and liberty to offer up spiritual sacrifices. What words can more fully declare that Christ is, and ought to be worshipped, equally with the Father, by all creatures, to all eternity! Happy those who shall adore and praise in heaven, and who shall for ever bless the Lamb, who delivered and set them apart for himself by his blood. How worthy art thou, O God, Father, Son, and Holy Ghost, of our highest praises! All creatures should proclaim thy greatness, and adore thy majesty.

View All Discussusion for Revelation Chapter 5... 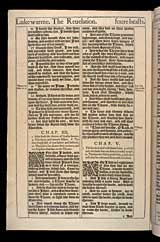