1 And I saw a new heauen, and a new earth: for the first heauen, and the first earth were passed away, and there was no more sea.

2 And I Iohn saw the holy City, new Hierusalem comming down from God out of heauen, prepared as a bride adorned for her husband.

3 And I heard a great voice out of heauen, saying, Behold, the Tabernacle of God is with men, and he wil dwell with them, and they shall be his people, and God himselfe shalbe with them, and be their God.

4 And God shall wipe away all teares from their eyes: and there shall bee no more death, neither sorrow, nor crying, neither shall there bee any more paine: for the former things are passed away.

5 And he that sate vpon the throne, said, Behold, I make all things new. And hee said vnto me, Write: for these words are true and faithfull.

6 And he said vnto mee, It is done: I am Alpha and Omega, the beginning and the end. I will giue vnto him that is athirst, of the fountaine of the water of life, freely.

7 He that ouercommeth, shall inherite all things, and I will bee his God, and he shall be my sonne.

8 But the fearefull, and vnbeleeuing, and the abominable, and murderers, and whore mongers, and sorcerers, and idolaters, and all lyars, shall haue their part in the lake which burneth with fire and brimstone: which is the second death.

9 And there came vnto me one of the seuen Angels, which had the seuen vials full of the seuen last plagues, and talked with me, saying, Come hither, I will shew thee the Bride, the Lambes wife.

10 And he caried me away in the spirit to a great and high mountaine, and shewed me that great citie, the holy Hierusalem, descending out of heauen from God,

11 Hauing the glory of God: and her light was like vnto a stone most precious; euen like a iasper stone, cleare as christal,

12 And had a wall great and high, and had twelue gates, and at the gates twelue Angels, & names written thereon, which are the names of the twelue tribes of the children of Israel.

14 And the wall of the citie had twelue foundations, and in them the names of the twelue Apostles of the Lambe.

15 And hee that talked with mee, had a golden reede to measure the citie, and the gates thereof, and the wall thereof.

17 And he measured the wall thereof, an hundred, and fourtie, and foure cubites, according to the measure of a man, that is, of the Angel.

18 And the building of the wall of it was of Iasper, and the city was pure gold, like vnto cleare glasse.

19 And the foundations of the wall of the city were garnished with all maner of precious stones. The first foundation was Iasper, the second Saphir, the third a Chalcedony, the fourth an Emerald,

20 The fift Sardonix, the sixt Sardius, the seuenth Chrysolite, the eight Beryl, the ninth a Topas, the tenth a Chrysoprasus, the eleuenth a Iacinct, the twelfth an Amethyst.

21 And the twelue gates were twelue pearles, euery seuerall gate was of one pearle, and the streete of the city was pure golde, as it were transparent glasse.

22 And I saw no Temple therein: For the Lord God Almightie, and the Lambe, are the Temple of it.

23 And the citie had no need of the Sunne, neither of the Moone to shine in it: for the glory of God did lighten it, and the Lambe is the light thereof.

24 And the nations of them which are saued, shall walke in the light of it: and the kings of the earth doe bring their glory and honour into it.

25 And the gates of it shall not bee shut at all by day: for there shall bee no night there.

26 And they shall bring the glorie and honour of the nations into it.

27 And there shall in no wise enter into it any thing that defileth, neither whatsoeuer worketh abomination, or maketh a lie: but they which are written in the Lambes booke of life.

A new heaven, and new earth: the new Jerusalem where God dwells, and banishes all sorrow from his people. (1-8) Its heavenly origin, glory, and secure defence. (9-21) Its perfect happiness, as enlightened with the presence of God and the Lamb, and in the free access of multitudes, made holy. (22-27)1-8 The new heaven and the new earth will not be separate from each other; the earth of the saints, their glorified, bodies, will be heavenly. The old world, with all its troubles and tumults, will have passed away. There will be no sea; this aptly represents freedom from conflicting passions, temptations, troubles, changes, and alarms; from whatever can divide or interrupt the communion of saints. This new Jerusalem is the church of God in its new and perfect state, the church triumphant. Its blessedness came wholly from God, and depends on him. The presence of God with his people in heaven, will not be interrupt as it is on earth, he will dwell with them continually. All effects of former trouble shall be done away. They have often been in tears, by reason of sin, of affliction, of the calamities of the church; but no signs, no remembrance of former sorrows shall remain. Christ makes all things new. If we are willing and desirous that the gracious Redeemer should make all things new in order hearts and nature, he will make all things new in respect of our situation, till he has brought us to enjoy complete happiness. See the certainty of the promise. God gives his titles, Alpha and Omega, the Beginning and the End, as a pledge for the full performance. Sensual and sinful pleasures are muddy and poisoned waters; and the best earthly comforts are like the scanty supplies of a cistern; when idolized, they become broken cisterns, and yield only vexation. But the joys which Christ imparts are like waters springing from a fountain, pure, refreshing, abundant, and eternal. The sanctifying consolations of the Holy Spirit prepare for heavenly happiness; they are streams which flow for us in the wilderness. The fearful durst not meet the difficulties of religion, their slavish fear came from their unbelief; but those who were so dastardly as not to dare to take up the cross of Christ, were yet so desperate as to run into abominable wickedness. The agonies and terrors of the first death will lead to the far greater terrors and agonies of eternal death.

9-21 God has various employments for his holy angels. Sometimes they sound the trumpet of Divine Providence, and warn a careless world; sometimes they discover things of a heavenly nature of the heirs of salvation. Those who would have clear views of heaven, must get as near to heaven as they can, on the mount of meditation and faith. The subject of the vision is the church of God in a perfect, triumphant state, shining in its lustre; glorious in relation to Christ; which shows that the happiness of heaven consists in intercourse with God, and in conformity to him. The change of emblems from a bride to a city, shows that we are only to take general ideas from this description. The wall is for security. Heaven is a safe state; those who are there, are separated and secured from all evils and enemies. This city is vast; here is room for all the people of God. The foundation of the wall; the promise and power of God, and the purchase of Christ, are the strong foundations of the safety and happiness of the church. These foundations are set forth by twelve sorts of precious stones, denoting the variety and excellence of the doctrines of the gospel, or of the graces of the Holy Spirit, or the personal excellences of the Lord Jesus Christ. Heaven has gates; there is a free admission to all that are sanctified; they shall not find themselves shut out. These gates were all of pearls. Christ is the Pearl of great price, and he is our Way to God. The street of the city was pure gold, like transparent glass. The saints in heaven tread gold under foot. The saints are there at rest, yet it is not a state of sleep and idleness; they have communion, not only with God, but with one another. All these glories but faintly represent heaven.

22-27 Perfect and direct communion with God, will more than supply the place of gospel institutions. And what words can more full express the union and co-equality of the Son with the Father, in the Godhead? What a dismal world would this be, if it were not for the light of the sun! What is there in heaven that supplies its place? The glory of God lightens that city, and the Lamb is the Light thereof. God in Christ will be an everlasting Fountain of knowledge and joy to the saints in heaven. There is no night, therefore no need of shutting the gates; all is at peace and secure. The whole shows us that we should be more and more led to think of heaven as filled with the glory of God, and enlightened by the presence of the Lord Jesus. Nothing sinful or unclean, idolatrous, or false and deceitful, can enter. All the inhabitants are made perfect in holiness. Now the saints feel a sad mixture of corruption, which hinders them in the service of God, and interrupts their communion with him; but, at their entrance into the holy of holies, they are washed in the laver of Christ's blood, and presented to the Father without spot. None are admitted into heaven who work abominations. It is free from hypocrites, such as make lies. As nothing unclean can enter heaven, let us be stirred up by these glimpses of heavenly things, to use all diligence, and to perfect holiness in the fear of God.

View All Discussusion for Revelation Chapter 21... 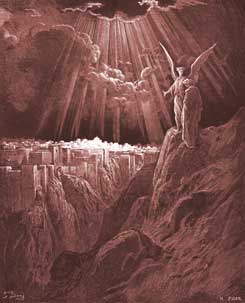 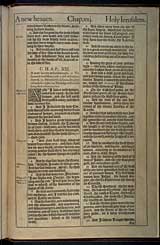