1 And I saw an Angel come down from heauen, hauing the key of the bottomles pit, & a great chaine in his hand.

2 And hee laid hold on the dragon that old serpent, which is the deuill and Satan, and bound him a thousand yeres,

3 And cast him into the bottomlesse pit, and shut him vp, and set a seale vpon him, that he should deceiue the nations no more, till the thousand yeeres should bee fulfilled: and after that hee must be loosed a little season.

4 And I saw thrones, and they sate vpon them, and iudgement was giuen vnto them: & I saw the soules of them that were beheaded for the witnesse of Iesus, and for the word of God, and which had not worshipped the beast, neither his image, neither had receiued his marke vpon their foreheads, or in their hands; and they liued and reigned with Christ a thousand yeeres.

5 But the rest of the dead liued not againe vntill the thousand yeeres were finished. This is the first resurrection.

6 Blessed & holy is he that hath part in þe first resurrection: on such the second death hath no power, but they shall be Priests of God, and of Christ, and shall reigne with him a thousand yeeres.

7 And when the thousand yeeres are expired, Satan shall be loosed out of his prison,

8 And shall goe out to deceiue the nations which are in the foure quarters of the earth, Gog & Magog, to gather them together to battell: the number of whom is as the sand of the sea.

9 And they went vp on the breadth of the earth, and compassed the campe of the Saints about, and the beloued citie: and fire came downe from God out of heauen, and deuoured them.

10 And the deuil that deceiued them, was cast into the lake of fire and brimstone, where the beast and the false prophet are, and shall be tormented day and night, for euer and euer.

11 And I saw a great white throne, and him that sate on it, from whose face the earth and the heauen fled away, and there was found no place for them.

12 And I sawe the dead, small and great, stand before God: and the books were opened: & another booke was opened, which is the booke of life: and the dead were iudged out of those things which were written in the books, according to their works.

14 And death and hell were cast into the lake of fire: this is the second death.

15 And whosoeuer was not found written in the booke of life, was cast into the lake of fire.

Satan is bound for a thousand years. (1-3) The first resurrection; those are blessed that have part therein. (4-6) Satan loosed, Gog and Magog. (7-10) The last and general resurrection. (11-15)1-3 Here is a vision, showing by a figure the restraints laid on Satan himself. Christ, with Almighty power, will keep the devil from deceiving mankind as he has hitherto done. He never wants power and instruments to break the power of Satan. Christ shuts by his power, and seals by his authority. The church shall have a time of peace and prosperity, but all her trials are not yet over.

4-6 Here is an account of the reign of the saints, for the same space of time as Satan is bound. Those who suffer with Christ, shall reign with him in his spiritual and heavenly kingdom, in conformity to him in his wisdom, righteousness, and holiness: this is called the first resurrection, with which none but those who serve Christ, and suffer for him, shall be favoured. The happiness of these servants of God is declared. None can be blessed but those that are holy; and all that are holy shall be blessed. We know something thing of what the first death is, and it is very awful; but we know not what this second death is. It must be much more dreadful; it is the death of the soul, eternal separation from God. May we never know what it is: those who have been made partakers of a spiritual resurrection, are saved from the power of the second death. We may expect that a thousand years will follow the destruction of the antichristian, idolatrous, persecuting powers, during which pure Christianity, in doctrine, worship, and holiness, will be made known over all the earth. By the all-powerful working of the Holy Spirit, fallen man will be new-created; and faith and holiness will as certainly prevail, as unbelief and unholiness now do. We may easily perceive what a variety of dreadful pains, diseases, and other calamities would cease, if all men were true and consistent Christians. All the evils of public and private contests would be ended, and happiness of every kind largely increased. Every man would try to lighten suffering, instead of adding to the sorrows around him. It is our duty to pray for the promised glorious days, and to do every thing in our public and private stations which can prepare for them.

7-10 While this world lasts, Satan's power in it will not be wholly destroyed, though it may be limited and lessened. No sooner is Satan let loose, than he again begins deceiving the nations, and stirring them up to make war with the saints and servants of God. It would be well if the servants and ministers of Christ were as active and persevering in doing good, as his enemies in doing mischief. God will fight this last and decisive battle for his people, that the victory may be complete, and the glory be to himself.

11-15 After the events just foretold, the end will speedily come; and there is no mention of any thing else, before the appearing of Christ to judge the world. This will be the great day: the Judge, the Lord Jesus Christ, will then put on majesty and terror. The persons to be judged are the dead, small and great; young and old, low and high, poor and rich. None are so mean, but they have some talents to account for; and none so great, as to avoid having to account for them. Not only those alive at the coming of Christ, but all the dead. There is a book of remembrance both for good and bad: and the book of the sinner's conscience, though formerly secret, will then be opened. Every man will recollect all his past actions, though he had long forgotten many of them. Another book shall be opened, the book of the Scriptures, the rule of life; it represents the Lord's knowledge of his people, and his declaring their repentance, faith, and good works; showing the blessings of the new covenant. By their works men shall be justified or condemned; he will try their principles by their practices. Those justified and acquitted by the gospel, shall be justified and acquitted by the Judge, and shall enter into eternal life, having nothing more to fear from death, or hell, or wicked men; for these are all destroyed together. This is the second death; it is the final separation of sinners from God. Let it be our great concern to see whether our Bibles justify or condemn us now; for Christ will judge the secrets of all men according to the gospel. Who shall dwell with devouring flames?

View All Discussusion for Revelation Chapter 20... 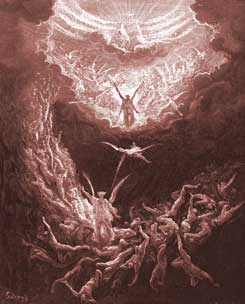