1 And there came one of the seuen Angels, which had the seuen vials, and talked with me, saying vnto mee, Come hither, I will shew vnto thee the iudgement of the great Whore, that sitteth vpon many waters:

3 So he caried me away in the Spirit into the wildernesse: and I saw a woman sit vpō a scarlet coloured beast, full of names of blasphemy, hauing seuen heads, and ten hornes.

4 And the woman was arayed in purple and scarlet colour, and decked with gold, and precious stone & pearles, hauing a golden cup in her hand, full of abominations and filthinesse of her fornication.

5 And vpon her forehead was a name written, Mystery, Babylon The Great, The Mother Of Harlots, And Abominations Of The Earth.

7 And the Angel saide vnto mee, Wherefore didst thou marueile? I will tell thee the mystery of the woman, and of the beast that carieth her, which hath the seuen heads, and ten hornes.

9 And here is the mind which hath wisedome. The seuen heads are seuen mountaines, on which the woman sitteth.

10 And there are seuen Kings, fiue are fallen, and one is, and the other is not yet come: and when he commeth, he must continue a short space.

11 And the beast that was, and is not, euen he is the eighth, & is of the seuen, and goeth into perdition.

12 And the tenne hornes which thou sawest, are ten kings, which haue receiued no kingdom as yet: but receiue power as kings one houre with the beast.

13 These haue one minde, and shall giue their power and strength vnto the beast.

14 These shal make warre with the Lambe, and the Lambe shal ouercome them: For he is Lord of Lords, and King of kings, and they that are with him, are called, & chosen, and faithfull.

15 And he saith vnto me, The waters which thou sawest, where the whore sitteth, are peoples, and multitudes, and nations, and tongues.

16 And the ten hornes which thou sawest vpon the beast, these shall hate the whore, and shall make her desolate, and naked, and shall eate her flesh, and burne her with fire.

17 For God hath put in their hearts to fulfill his will, and to agree, and giue their kingdome vnto the beast, vntil the words of God shall be fulfilled.

18 And the woman which thou sawest, is that great Citie which reigneth ouer the kings of the earth.

One of the angels who had the vials, explains the meaning of the former vision of the antichristian beast that was to reign 1260 years, and then to be destroyed. (1-6) And interprets the mystery of the woman, and the beast that had seven heads and ten horns. (7-18)1-6 Rome clearly appears to be meant in this chapter. Pagan Rome subdued and ruled with military power, not by art and flatteries. She left the nations in general to their ancient usages and worship. But it is well known that by crafty and politic management, with all kinds of deceit of unrighteousness, papal Rome has obtained and kept her rule over kings and nations. Here were allurements of worldly honour and riches, pomp and pride, suited to sensual and worldly minds. Prosperity, pomp, and splendour, feed the pride and lusts of the human heart, but are no security against the Divine vengeance. The golden cup represents the allurements, and delusions, by which this mystical Babylon has obtained and kept her influence, and seduced others to join her abominations. She is named, from her infamous practices, a mother of harlots; training them up to idolatry and all sorts of wickedness. She filled herself with the blood of the saints and martyrs of Jesus. She intoxicated herself with it; and it was so pleasant to her, that she never was satisfied. We cannot but wonder at the oceans of Christian blood shed by men called Christians; yet when we consider these prophecies, these awful deeds testify to the truth of the gospel. And let all beware of a splendid, gainful, or fashionable religion. Let us avoid the mysteries of iniquity, and study diligently the great mystery of godliness, that we may learn humility and gratitude from the example of Christ. The more we seek to resemble him, the less we shall be liable to be deceived by antichrist.

7-14 The beast on which the woman sat was, and is not, and yet is. It was a seat of idolatry and persecution, and is not; not in the ancient form, which was pagan: yet it is; it is truly the seat of idolatry and tyranny, though of another sort and form. It would deceive into stupid and blind submission all the inhabitants of the earth within its influence, except the remnant of the elect. This beast was seven heads, seven mountains, the seven hills on which Rome stands; and seven kings, seven sorts of government. Five were gone by when this prophecy was written; one was then in being; the other was yet to come. This beast, directed by the papacy, makes an eighth governor, and sets up idolatry again. It had ten horns, which are said to be ten kings who had as yet no kingdoms; they should not rise up till the Roman empire was broken; but should for a time be very zealous in her interest. Christ must reign till all enemies be put under his feet. The reason of the victory is, that he is the King of kings, and Lord of lords. He has supreme dominion and power over all things; all the powers of earth and hell are subject to his control. His followers are called to this warfare, are fitted for it, and will be faithful in it.

15-18 God so ruled the hearts of these kings, by his power over them, and by his providence, that they did those things, without intending it, which he purposed and foretold. They shall see their folly, and how they have been bewitched and enslaved by the harlot, and be made instruments in her destruction. She was that great city which reigned over the kings of the earth, when John had this vision; and every one knows Rome to be that city. Believers will be received to the glory of the Lord, when wicked men will be destroyed in a most awful manner; their joining together in sin, will be turned to hatred and rage, and they will eagerly assist in tormenting each other. But the Lord's portion is his people; his counsel shall stand, and he will do all his pleasure, to his glory, and the happiness of all his servants.

View All Discussusion for Revelation Chapter 17... 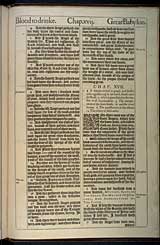