1 And I looked, and loe, a Lambe stood on the mount Sion, and with him an hundreth fourty and foure thousand, hauing his Fathers Name written in their foreheads.

3 And they sung as it were a new song before the throne, and before the foure beasts, and the Elders, and no man could learne that song, but the hundreth and fourtie and foure thousand, which were redeemed from the earth.

5 And in their mouth was found no guile: for they are without fault before the throne of God.

6 And I saw another Angel flie in the midst of heauen, hauing the euerlasting Gospel, to preach vnto them that dwel on the earth, and to euery nation, and kinred, and tongue, and people,

7 Saying with a loud voice, Feare God, and giue glory to him, for the houre of his iudgement is come: and worshippe him that made heauen and earth, and the sea, and the fountains of waters.

8 And there followed another Angel, saying, Babylon is fallen, is fallen, that great citie, because she made all nations drinke of the wine of the wrath of her fornication.

9 And the third Angel followed them, saying with a lowd voice, If any man worship the beast and his image, and receiue his marke in his forehead, or in his hand,

11 And the smoke of their torment ascendeth vp for euer and euer. And they haue no rest day nor night, who worship the beast and his image, and whosoeuer receyueth the marke of his name.

12 Here is the patience of the Saints: Here are they that keepe the Commandements of God, and the faith of Iesus.

13 And I heard a voyce from heauen, saying vnto me, Write, Blessed are the dead which die in the Lord, from hencefoorth, yea, saith the Spirit, that they may rest from their labours, and their workes doe follow them.

14 And I looked, and beholde, a white cloud, and vpon the cloude one sate like vnto the sonne of man, hauing on his head a golden crowne, and in his hand a sharpe sickle.

15 And another Angel came out of the Temple crying with a loude voice to him that sate on the cloud: Thrust in thy sickle and reape, for the time is come for thee to reape, for the haruest of the earth is ripe.

16 And hee that sate on the cloude thrust in his sickle on the earth, and the earth was reaped.

17 And another Angel came out of the Temple which is in heauen, he also hauing a sharpe sickle.

18 And another Angel came out from the Altar, which had power ouer fire, and cryed with a loud cry to him, that had the sharpe sickle, saying, Thrust in thy sharpe sickle, and gather the clusters of the vine of the earth, for her grapes are fully ripe.

19 And the Angel thrust in his sickle into the earth, and gathered the vine of the earth, & cast it into the great winepresse of the wrath of God.

20 And the winepresse was troden without the citie, and blood came out of the winepresse, euen vnto the horse bridles, by the space of a thousand and sixe hundred furlongs.

Those faithful to Christ celebrate the praises of God. (1-5) Three angels; one proclaiming the everlasting gospel; another, the downfal of Babylon; and a third, the dreadful wrath of God on the worshippers of the beast. The blessedness of those who die in the Lord. (6-13) A vision of Christ with a sickle, and of a harvest ripe for cutting down. (14-16) The emblem of a vintage fully ripe, trodden in the wine-press of God's wrath. (17-20)1-5 Mount Sion is the gospel church. Christ is with his church, and in the midst of her in all her troubles, therefore she is not consumed. His presence secures perseverance. His people appear honourably. They have the name of God written in their foreheads; they make a bold and open profession of their faith in God and Christ, and this is followed by suitable actings. There were persons in the darkest times, who ventured and laid down their lives for the worship and truth of the gospel of Christ. They kept themselves clean from the wicked abominations of the followers of antichrist. Their hearts were right with God; and they were freely pardoned in Christ; he is glorified in them, and they in him. May it be our prayer, our endeavour, our ambition, to be found in this honourable company. Those who are really sanctified and justified are meant here, for no hypocrite, however plausible, can be accounted to be without fault before God.

6-13 The progress of the Reformation appears to be here set forth. The four proclamations are plain in their meaning; that all Christians may be encouraged, in the time of trial, to be faithful to their Lord. The gospel is the great means whereby men are brought to fear God, and to give glory to him. The preaching of the everlasting gospel shakes the foundations of antichrist in the world, and hastens its downfal. If any persist in being subject to the beast, and in promoting his cause, they must expect to be for ever miserable in soul and body. The believer is to venture or suffer any thing in obeying the commandments of God, and professing the faith of Jesus. May God bestow this patience upon us. Observe the description of those that are and shall be blessed: such as die in the Lord; die in the cause of Christ, in a state of union with Christ; such as are found in Christ when death comes. They rest from all sin, temptation, sorrow, and persecution; for there the wicked cease from troubling, there the weary are at rest. Their works follow them: do not go before as their title, or purchase, but follow them as proofs of their having lived and died in the Lord: the remembrance of them will be pleasant, and the reward far above all their services and sufferings. This is made sure by the testimony of the Spirit, witnessing with their spirits, and the written word.

14-20 Warnings and judgments not having produced reformation, the sins of the nations are filled up, and they become ripe for judgments, represented by a harvest, an emblem which is used to signify the gathering of the righteous, when ripe for heaven, by the mercy of God. The harvest time is when the corn is ripe; when the believers are ripe for heaven, then the wheat of the earth shall be gathered into Christ's garner. And by a vintage. The enemies of Christ and his church are not destroyed, till by their sin they are ripe for ruin, and then he will spare them no longer. The wine-press is the wrath of God, some terrible calamity, probably the sword, shedding the blood of the wicked. The patience of God towards sinners, is the greatest miracle in the world; but, though lasting, it will not be everlasting; and ripeness in sin is a sure proof of judgment at hand.

View All Discussusion for Revelation Chapter 14... 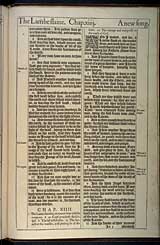