2 And the beast which I saw, was like vnto a Leopard, and his feet were as the feet of a Beare, and his mouth as the mouth of a Lion: and the dragon gaue him his power, and his seat, and great authoritie.

3 And I saw one of his heads as it were wounded to death, and his deadly wound was healed: and al the world wondered after the beast.

6 And he opened his mouth in blasphemie against God, to blaspheme his Name, and his Tabernacle, and them that dwelt in heauen.

7 And it was giuen vnto him to make warre with the Saints, and to ouercome them: And power was giuen him ouer all kinreds, and tongues, and nations.

8 And all that dwel vpon the earth, shall worship him, whose names are not written in the booke of life of the Lambe, slaine from the foundation of the world.

9 If any man haue an eare, let him heare:

11 And I beheld another beast comming vp out of the earth, and hee had two hornes like a lambe, and hee spake as a dragon.

12 And he exerciseth all the power of the first beast before him, and causeth the earth and them which dwell therein, to worship the first beast, whose deadly wound was healed.

13 And hee doeth great wonders, so that hee maketh fire come downe from heauen on the earth in the sight of men,

16 And he causeth all, both smal and great rich and poore, free and bond, to receiue a marke in their right hand, or in their foreheads:

17 And that no man might buy or sell, saue he that had the marke, or the name of the beast, or the number of his name.

18 Here is wisedome. Let him that hath vnderstanding, count the number of the beast: for it is the number of a man, and his number is, sixe hundred threescore and sixe.

A wild beast rises out of the sea, to whom the dragon gives his power. (1-10) Another beast, which has two horns like a lamb, but speaks as a dragon. (11-15) It obliges all to worship its image, and receive its mark, as persons devoted to it. (16-18)1-10 The apostle, standing on the shore, saw a savage beast rise out of the sea; a tyrannical, idolatrous, persecuting power, springing up out of the troubles which took place. It was a frightful monster! It appears to mean that worldly, oppressing dominion, which for many ages, even from the times of the Babylonish captivity, had been hostile to the church. The first beast then began to oppress and persecute the righteous for righteousness' sake, but they suffered most under the fourth beast of Daniel, (the Roman empire,) which has afflicted the saints with many cruel persecutions. The source of its power was the dragon. It was set up by the devil, and supported by him. The wounding the head may be the abolishing pagan idolatry; and the healing of the wound, introducing popish idolatry, the same in substance, only in a new dress, but which as effectually answers the devil's design. The world admired its power, policy and success. They paid honour and subjection to the devil and his instruments. It exercised infernal power and policy, requiring men to render that honour to creatures which belongs to God alone. Yet the devil's power and success are limited. Christ has a chosen remnant, redeemed by his blood, recorded in his book, sealed by his Spirit; and though the devil and antichrist may overcome the body, and take away the natural life, they cannot conquer the soul, nor prevail with true believers to forsake their Saviour, and join his enemies. Perseverance in the faith of the gospel and true worship of God, in this great hour of trial and temptation, which would deceive all but the elect, is the character of those registered in the book of life. This powerful motive and encouragement to constancy, is the great design of the whole Revelation.

11-18 Those who understand the first beast to denote a worldly power, take the second to be also a persecuting and assumed power, which acts under the disguise of religion, and of charity to the souls of men. It is a spiritual dominion, professing to be derived from Christ, and exercised at first in a gentle manner, but soon spake like the dragon. Its speech betrayed it; for it gives forth those false doctrines and cruel decrees, which show it to belong to the dragon, and not to the Lamb. It exercised all the power of the former beast. It pursues the same design, to draw men from worshipping the true God, and to subject the souls of men to the will and control of men. The second beast has carried on its designs, by methods whereby men should be deceived to worship the former beast, in the new shape, or likeness made for it. By lying wonders, pretended miracles. And by severe censures. Also by allowing none to enjoy natural or civil rights, who will not worship that beast which is the image of the pagan beast. It is made a qualification for buying and selling, as well as for places of profit and trust, that they oblige themselves to use all their interest, power, and endeavour, to forward the dominion of the beast, which is meant by receiving his mark. To make an image to the beast, whose deadly wound was healed, would be to give form and power to his worship, or to require obedience to his commands. To worship the image of the beast, implies being subject to those things which stamp the character of the picture, and render it the image of the beast. The number of the beast is given, so as to show the infinite wisdom of God, and to exercise the wisdom of men. The number is the number of a man, computed after the usual manner among men, and it is 666. What or who is intended by this, remains a mystery. To almost every religious dispute this number has yet been applied, and it may reasonably be doubted whether the meaning has yet been discovered. But he who has wisdom and understanding, will see that all the enemies of God are numbered and marked out for destruction; that the term of their power will soon expire, and that all nations shall submit to our King of righteousness and peace.

View All Discussusion for Revelation Chapter 13... 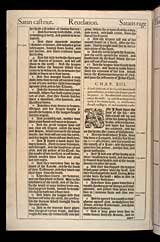