1 And there appeared a great wonder in heauen, a woman clothed with the Sunne, & the Moone vnder her feete, and vpon her head a Crowne of twelue starres:

2 And shee being with childe, cried, trauailing in birth, and pained to be deliuered.

3 And there appeared another wonder in heauen, and behold a great red dragon, hauing seuen heads, and ten hornes, and seuen crownes vpon his heads.

4 And his taile drew the third part of the starres of heauen, and did cast them to the earth: And the dragon stood before the woman which was ready to be deliuered, for to deuoure her childe as soone as it was borne.

5 And shee brought foorth a man child, who was to rule all nations with a rod of yron: and her child was caught vp vnto God, and to his Throne.

6 And the woman fled into the wildernesse, where shee hath a place prepared of God, that they should feed her there a thousand, two hundred, and threescore dayes.

7 And there was warre in heauen, Michael and his Angels fought against the dragon, & the dragon fought and his angels,

8 And preuailed not, neither was their place found any more in heauen.

9 And the great dragon was cast out, that old serpent, called the deuill and Satan, which deceiueth the whole world: hee was cast out into the earth, and his angels were cast out with him.

10 And I heard a lowd voyce saying in heauen, Now is come saluation, and strength, and the kingdome of our God, and the power of his Christ: for the accuser of our brethren is cast down, which accused them before our God day and night.

11 And they ouercame him by the blood of the Lambe, and by the word of their Testimony, and they loued not their liues vnto the death.

12 Therefore reioyce, yee heauens, and yee that dwell in them; Woe to the inhabiters of the earth, and of the sea: for the deuill is come downe vnto you, hauing great wrath, because he knoweth that he hath but a short time.

13 And when the dragon saw that he was cast vnto the earth, hee persecuted the woman which brought foorth the man childe.

14 And to the woman were giuen two wings of a great Eagle, that shee might flee into the wildernesse into her place, where she is nourished for a time, and times, and halfe a time, from the face of the serpent.

15 And the serpent cast out of his mouth water as a flood, after the woman: that he might cause her to bee caried away of the flood.

16 And the earth helped the woman, and the earth opened her mouth, and swallowed vp the flood which the dragon cast out of his mouth.

17 And the dragon was wroth with the woman, and went to make warre with the remnant of her seed, which keepe the Commaundements of God, and haue the testimony of Iesus Christ.

A description of the church of Christ and of Satan, under the figures of a woman and of a great red dragon. (1-6) Michael and his angels fight against the devil and his angels, who are defeated. (7-12) The dragon persecutes the church. (13,14) His vain endeavours to destroy her, He renews his war against her seed. (14-17)1-6 The church, under the emblem of a woman, the mother of believers, was seen by the apostle in vision, in heaven. She was clothed with the sun, justified, sanctified, and shining by union with Christ, the Sun of Righteousness. The moon was under her feet; she was superior to the reflected and feebler light of the revelation made by Moses. Having on her head a crown of twelve stars; the doctrine of the gospel, preached by the twelve apostles, is a crown of glory to all true believers. As in pain to bring forth a holy family; desirous that the conviction of sinners might end in their conversion. A dragon is a known emblem of Satan, and his chief agents, or those who govern for him on earth, at that time the pagan empire of Rome, the city built upon seven hills. As having ten horns, divided into ten kingdoms. Having seven crowns, representing seven forms of government. As drawing with his tail a third part of the stars in heaven, and casting them down to the earth; persecuting and seducing the ministers and teachers. As watchful to crush the Christian religion; but in spite of the opposition of enemies, the church brought forth a manly issue of true and faithful professors, in whom Christ was truly formed anew; even the mystery of Christ, that Son of God who should rule the nations, and in whose right his members partake the same glory. This blessed offspring was protected of God.

7-11 The attempts of the dragon proved unsuccessful against the church, and fatal to his own interests. The seat of this war was in heaven; in the church of Christ, the kingdom of heaven on earth. The parties were Christ, the great Angel of the covenant, and his faithful followers; and Satan and his instruments. The strength of the church is in having the Lord Jesus for the Captain of their salvation. Pagan idolatry, which was the worship of devils, was cast out of the empire by the spreading of Christianity. The salvation and strength of the church, are only to be ascribed to the King and Head of the church. The conquered enemy hates the presence of God, yet he is willing to appear there, to accuse the people of God. Let us take heed that we give him no cause to accuse us; and that, when we have sinned, we go before the Lord, condemn ourselves, and commit our cause to Christ as our Advocate. The servants of God overcame Satan by the blood of the Lamb, as the cause. By the word of their testimony: the powerful preaching of the gospel is mighty, through God, to pull down strong holds. By their courage and patience in sufferings: they loved not their lives so well but they could lay them down in Christ's cause. These were the warriors and the weapons by which Christianity overthrew the power of pagan idolatry; and if Christians had continued to fight with these weapons, and such as these, their victories would have been more numerous and glorious, and the effects more lasting. The redeemed overcame by a simple reliance on the blood of Christ, as the only ground of their hopes. In this we must be like them. We must not blend any thing else with this.

12-17 The church and all her friends might well be called to praise God for deliverance from pagan persecution, though other troubles awaited her. The wilderness is a desolate place, and full of serpents and scorpions, uncomfortable and destitute of provisions; yet a place of safety, as well as where one might be alone. But being thus retired could not protect the woman. The flood of water is explained by many to mean the invasions of barbarians, by which the western empire was overwhelmed; for the heathen encouraged their attacks, in the hope of destroying Christianity. But ungodly men, for their worldly interests, protected the church amidst these tumults, and the overthrow of the empire did not help the cause of idolatry. Or, this may be meant of a flood of error, by which the church of God was in danger of being overwhelmed and carried away. The devil, defeated in his designs upon the church, turns his rage against persons and places. Being faithful to God and Christ, in doctrine, worship, and practice, exposes to the rage of Satan; and will do so till the last enemy shall be destroyed.

View All Discussusion for Revelation Chapter 12... 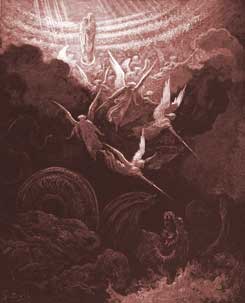 The Woman and Dragon 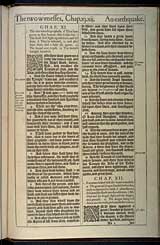