1 And I saw another mighty Angel come down from heauen, clothed with a cloud, and a rainebow was vpon his head, and his face was as it were the Sunne, and his feet as pillars of fire.

2 And hee had in his hand a little booke open: and hee set his right foote vpon the sea, and his left foote on the earth,

3 And cryed with a loude voice, as when a Lion roareth: and when hee had cried, seuen thunders vttered their voices.

5 And the Angel which I saw stand vpon the sea, and vpon the earth, lifted vp his hand to heauen,

7 But in the dayes of the voice of the seuenth Angel, when he shall begin to sound, the mysterie of God should be finished, as hee hath declared to his seruants the Prophets.

8 And the voice which I heard from heauen spake vnto me againe, and said, Go, and take the litle booke which is open in the hand of the Angel which standeth vpon the sea, and vpon the earth.

9 And I went vnto the Angel, and said vnto him, Giue me the little booke. And he sayd vnto me, Take it, and eat it vp, and it shall make thy belly bitter, but it shall bee in thy mouth sweete as hony.

10 And I tooke the little booke out of the Angels hand, and ate it vp, and it was in my mouth sweet as honie: and as soone as I had eaten it, my belly was bitter.

11 And he sayd vnto me, Thou must prophesie againe before many peoples, and nations, and tongues, and kings.

The Angel of the covenant presents a little open book, which is followed with seven thunders. (1-4) At the end of the following prophecies, time should be no more. (5-7) A voice directs the apostle to eat the book; (8-10) and tells him he must prophesy further. (11)1-7 The apostle saw another representation. The person communicating this discovery probably was our Lord and Saviour Jesus Christ, or it was to show his glory. He veils his glory, which is too great for mortal eyes to behold; and throws a veil upon his dispensations. A rainbow was upon his head; our Lord is always mindful of his covenant. His awful voice was echoed by seven thunders; solemn and terrible ways of discovering the mind of God. We know not the subjects of the seven thunders, nor the reasons for suppressing them. There are great events in history, perhaps relating to the Christian church, which are not noticed in open prophecy. The final salvation of the righteous, and the final success of true religion on earth, are engaged for by the unfailing word of the Lord. Though the time may not be yet, it cannot be far distant. Very soon, as to us, time will be no more; but if we are believers, a happy eternity will follow: we shall from heaven behold and rejoice in the triumphs of Christ, and his cause on earth.

8-11 Most men feel pleasure in looking into future events, and all good men like to receive a word from God. But when this book of prophecy was thoroughly digested by the apostle, the contents would be bitter; there were things so awful and terrible, such grievous persecutions of the people of God, such desolations in the earth, that the foresight and foreknowledge of them would be painful to his mind. Let us seek to be taught by Christ, and to obey his orders; daily meditating on his word, that it may nourish our souls; and then declaring it according to our several stations. The sweetness of such contemplations will often be mingled with bitterness, while we compare the Scriptures with the state of the world and the church, or even with that of our own hearts.

View All Discussusion for Revelation Chapter 10... 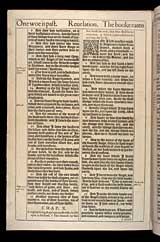