1 To the chiefe musician vpon Mahalath, Maschil, A Psalme of Dauid. The foole hath sayde in his heart, There is no god; Corrupt are they, and haue done abhominable iniquitie; there is none that doth good.

2 God looked downe from heauen vpon the children of men, to see if there were any that did vnderstand, that did seeke God.

3 Euery one of them is gone backe, they are altogether become filthy: there is none that doth good, no not one.

4 Haue the workers of iniquitie no knowledge? who eate vp my people, as they eate bread; they haue not called vpon God.

5 There were they in great feare, where no feare was: for God hath scattered the bones of him that incampeth against thee, thou hast put them to shame, because God hath despised them.

6 O that the saluation of Israel were come out of Sion! when God bringeth backe the captiuitie of his people, Iaakob shall reioyce, and Israel shall be glad.

The corruption of man by nature.

- This psalm is almost the same as the 14th. The scope of it is to convince us of our sins. God, by the psalmist, here shows us how bad we are, and proves this by his own certain knowledge. He speaks terror to persecutors, the worst of sinners. He speaks encouragement to God's persecuted people. How comes it that men are so bad? Because there is no fear of God before their eyes. Men's bad practices flow from their bad principles; if they profess to know God, yet in works, because in thoughts, they deny him. See the folly of sin; he is a fool, in the account of God, whose judgment we are sure is right, that harbours such corrupt thoughts. And see the fruit of sin; to what it brings men, when their hearts are hardened through the deceitfulness of sin. See also the faith of the saints, and their hope and power as to the cure of this great evil. There will come a Saviour, a great salvation, a salvation from sin. God will save his church from its enemies. He will save all believers from their own sins, that they may not be led captive by them, which will be everlasting joy to them. From this work the Redeemer had his name JESUS, for he shall save his people from their sins, #Mt 1:21|.

View All Discussusion for Psalms Chapter 53... 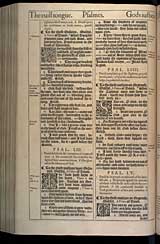