2 Take hold of shield and buckler, and stand vp for mine helpe.

3 Draw out also the speare, and stop the way against them that persecute me: say vnto my soule, I am thy saluation.

4 Let them be confounded and put to shame that seeke after my soule: let them be turned backe and brought to confusion, that deuise my hurt.

5 Let them be as chaffe before the wind: and let the Angel of the Lord chase them.

6 Let their way be darke and slippery, and let the Angel of the Lord persecute them.

8 Let destruction come vpon him at vnawares, and let his net that hee hath hid, catch himselfe: into that very destruction let him fall.

9 And my soule shalbe ioyfull in the Lord: it shall reioyce in his saluation.

10 All my bones shall say, Lord, who is like vnto thee which deliuerest the poore from him that is too strong for him, yea the poore and the needy, from him that spoileth him?

11 False witnesses did rise vp they layd to my charge things that I knew not.

12 They rewarded mee euill for good, to the spoiling of my soule.

13 But as for me, when they were sicke, my clothing was sack-cloth: I humbled my soule with fasting, and my prayer returned into mine owne bosome.

14 I behaued my selfe as though he had bene my friend, or brother: I bowed downe heauily, as one that mourneth for his mother.

16 With hypocriticall mockers in feasts: they gnashed vpon mee with their teeth.

17 Lord, how long wilt thou looke on? rescue my soule from their destructions, my darling from the lyons.

18 I will giue thee thankes in the great congregation: I will praise thee among much people.

19 Let not them that are mine enemies wrongfully, reioyce ouer me: neither let them winke with the eye, that hate me without a cause.

20 For they speake not peace: but they deuise deceitfull matters against them that are quiet in the land.

21 Yea they opened their mouth wide against me, and saide, Aha, Aha, our eye hath seene it.

22 This thou hast seene (O Lord) keepe not silence: O Lord be not farre from me.

23 Stirre vp thy selfe and awake to my iudgement, euen vnto my cause, my God and my Lord.

24 Iudge me O Lord my God, according to thy righteousnesse, and let them not reioyce ouer me.

26 Let them be ashamed and brought to confusion together, that reioyce at mine hurt: let them bee cloathed with shame and dishonour, that magnifie themselues against me.

27 Let them shoute for ioy, and bee glad that fauour my righteous cause: yea let them say continually, Let the Lord bee magnified, which hath pleasure in the prosperity of his seruant

28 And my tongue shall speake of thy righteousnesse, and of thy praise all the day long.

1-10 It is no new thing for the most righteous men, and the most righteous cause, to meet with enemies. This is a fruit of the old enmity in the seed of the serpent against the Seed of the woman. David in his afflictions, Christ in his sufferings, the church under persecution, and the Christian in the hour temptation, all beseech the Almighty to appear in their behalf, and to vindicate their cause. We are apt to justify uneasiness at the injuries men do us, by our never having given them cause to use us so ill; but this should make us easy, for then we may the more expect that God will plead our cause. David prayed to God to manifest himself in his trial. Let me have inward comfort under all outward troubles, to support my soul. If God, by his Spirit, witness to our spirits that he is our salvation, we need desire no more to make us happy. If God is our Friend, no matter who is our enemy. By the Spirit of prophecy, David foretells the just judgments of God that would come upon his enemies for their great wickedness. These are predictions, they look forward, and show the doom of the enemies of Christ and his kingdom. We must not desire or pray for the ruin of any enemies, except our lusts and the evil spirits that would compass our destruction. A traveller benighted in a bad road, is an expressive emblem of a sinner walking in the slippery and dangerous ways of temptation. But David having committed his cause to God, did not doubt of his own deliverance. The bones are the strongest parts of the body. The psalmist here proposes to serve and glorify God with all his strength. If such language may be applied to outward salvation, how much more will it apply to heavenly things in Christ Jesus!

11-16 Call a man ungrateful, and you can call him no worse: this was the character of David's enemies. Herein he was a type of Christ. David shows how tenderly he had behaved towards them in afflictions. We ought to mourn for the sins of those who do not mourn for themselves. We shall not lose by the good offices we do to any, how ungrateful soever they may be. Let us learn to possess our souls in patience and meekness like David, or rather after Christ's example.

17-28 Though the people of God are, and study to be, quiet, yet it has been common for their enemies to devise deceitful matters against them. David prays, My soul is in danger, Lord, rescue it; it belongs to thee the Father of spirits, therefore claim thine own; it is thine, save it! Lord, be not far from me, as if I were a stranger. He who exalted the once suffering Redeemer, will appear for all his people: the roaring lion shall not destroy their souls, any more than he could that of Christ, their Surety. They trust their souls in his hands, they are one with him by faith, are precious in his sight, and shall be rescued from destruction, that they may give thanks in heaven.

View All Discussusion for Psalms Chapter 35... 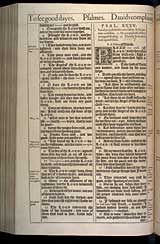